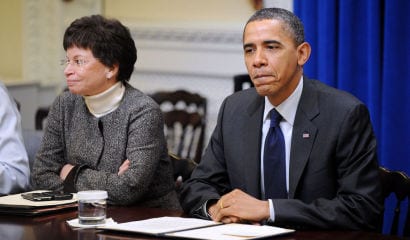 The White House says the decision, announced last Tuesday, to delay implementation of Obamacare’s employer mandate was made because “a dialogue with businesses” revealed the need to reduce the reporting burden it placed on employers. This tale is enough to make a cat laugh. This crew doesn’t do “dialogue.” Your BS detector badly needs a tune up if it didn’t start buzzing when Valerie Jarrett blogged, “We’re listening.” The delay is obviously due to the ineptitude of the Obama administration, and this is the fourth major provision of PPACA to be repealed or delayed for the same reason.

First, there came the very timely demise of Obamacare’s infamous “1099 provision.” This provision required small businesses to file a special IRS form for each transaction carried out with another business amounting to $600 or more. The requirement promised to be so onerous that business groups all across the country screamed bloody murder. It was to have taken effect in 2012. But the universal outcry from the business community forced the Democrats and the White House to reconsider the wisdom of leaving such a provision in the law during an election year. Thus, it was repealed in April, 2012.

Second in line for the chopping block was the Community Living Assistance Services and Supports (CLASS) Act. This program was included in Obamacare to create a new long-term care entitlement. It was so badly designed, however, that even HHS Commissar Sebelius admitted it was a disaster, and one of its own administrators speculated that it might well collapse under its own weight. Democrat Senator Kent Conrad described it as a “Ponzi scheme … the kind of thing that Bernie Madoff would have been proud of.” Thus, it was quietly put out of its misery by a provision of the “fiscal cliff” deal.

The third major Obamacare provision to be mismanaged to a halt was the Small Business Health Option Program (SHOP). The purpose of SHOP was to provide a marketplace where small business employees would be offered a range of health insurance plans. The Obama administration, however, was unable to provide the promised options. So, last April, HHS announced that SHOP would have to be “postponed.” This means that the employees of small businesses will get the same number of coverage choices that Henry Ford famously offered his Model T customers by way of color selection.

And now we have the “delay” of the employer mandate, which will have the most wide-ranging consequences of the four. Indeed, Cato’s Michael Cannon argues that Obamacare can’t function without the mandate: “The employer mandate is so intimately tied to the rest of the law that the IRS cannot delay it without delaying the rest of Obamacare.” Cannon notes that the administration also suspended the requirement that employers report the coverage they will be offering workers and points out that, without this information, the exchanges can’t possibly know who is eligible for credits and subsidies.

“Without the credits and subsidies,” Cannon continues, “the ‘rate shock’ that workers will experience will be much greater and/or many more workers will qualify for the unaffordability exemption from the individual mandate.” But Cannon may well be mistaken in his assumption that the flow of credits and subsidies will be impeded by the mere inability of the exchanges to verify eligibility. Three days after the announcement that the employer mandate had been put on ice, we learned that the Obama administration has also decided not to require these “insurance marketplaces” to go through this inconvenient process.

The administration “announced” last Friday, by means of an obscure passage buried deep in the Federal Register, that it will ignore the explicit requirements of the health “reform” law regarding verification of an applicant’s income and health insurance status. How will the apparatchiks who run the exchanges know whether an applicant is truly eligible for credits and subsidies? They will rely on the honor system. No. I’m not kidding. The regulation phrases it thus: “The exchange may accept the applicant’s attestation regarding enrollment in an eligible employer sponsored plan … without further verification.”

Not only does this arbitrary alteration of the rules governing the exchanges constitute an open invitation for fraudsters to lie on their applications, it once again demonstrates that Obama’s health care bureaucrats have no idea how to live up to the promises he and his congressional accomplices made on behalf of his “most significant domestic achievement.” As Seton Motley, founder of Less Government, observed when SHOP was sent to the death panel: “What this shows me is that the Obama administration didn’t have the skills or expertise to implement [Obamacare], so in my opinion, it needs to go.”

Unfortunately, the man who signed Obamacare into law was reelected last November, and his party was left in control of the Senate. But midterm voters are more sophisticated, on average, than those who vote in presidential elections. Most of the people who show up at the polls in November of 2014 already regard Obamacare with a jaundiced eye. Will the employer mandate delay, combined with all the previous fumbles and fouls, be the final straw for these voters? One hopes so. If they return the Senate to the Republicans, and keep them in charge of the House, maybe something can be done about this unholy mess.