News Politics You Didn't Build That - The American Spectator | USA News and Politics
Menu
News
You Didn’t Build That
by Christopher C. Hull 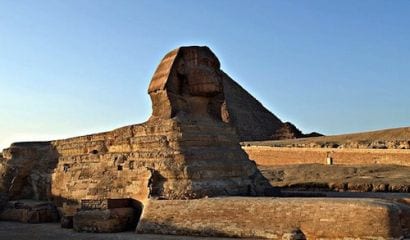 How did the Great Sphinx at Giza — with the body of a lion and the head of King Khafre — lose his nose? It was not through long exposure (some 4,000 years) to the elements. Rather, it was an act of vandalism, or iconoclasm.

According to the 15th century Arab historian al-Maqrizi, in the year 1378 AD, a passing Sufi holy man by the name of Mohammed Sa’im al-Dahr took offense at the sight of a huge stone face rising out of the desert floor in defiance of Islam’s ban on human images. Upon learning that peasants made sacrifices to the Sphinx in hopes of an abundant harvest, the meddlesome holy man put up scaffolding and used a hammer and chisel to remove the meter-wide nose. Upset over this sacrilege, the peasants lynched al-Dahr and buried him in front of the Sphinx as their next sacrifice.

It now seems that the Muslim Brotherhood in Egypt has received a similar rebuke for its impudence in trying to impose an Iranian-like theocracy in a country where most people — even devout Moslems — are fearful of Islamic fundamentalism — knowing that Iran turned into a worse hellhole under the mullahs than it ever was under the Shah.

In the first round of the presidential election held in May of 2012, the Muslim Brotherhood’s Mohammed Morsi and Ahmed Shafik — who had served as prime minister under Hosni Mubarak — finished in almost a dead heat. Morsi had 24.78% of the vote to 23.66% for Shafik. In the run-off between the two in June, Morsi got 51.7% of the vote against a still extraordinarily high 48.3% for a holdover from the hated Mubarak regime.

In an otherwise prescient column in the Wall Street Journal — which appeared the day before Mubarak’s resignation from office on February 11, 2011 — Daniel Henninger described Egypt’s transition to democracy as “a walk in the park” — compared to the problem of fixing the economy. In posing the question, “Is Egypt Hopeless?” he wrote:

With luck and support from the world’s democracies, Egypt’s people will get a credible political system. What they won’t get — now or possibly ever — is an economy able to produce real jobs for their country’s large, young population. Establishing a democratic system in Egypt is a walk in the park compared to allowing a 21st-century economy to come to life there.

Egypt isn’t just a sad story of political oppression. Egypt is an object lesson for other nations, including ours, struggling to produce enough jobs for young workers.

With 35% of the employed population working for the state, Henninger worried that Egypt might already be past the tipping point that allows a modern economy to grow. That compares with 13% for Turkey, and even lower numbers for other young democracies that have experienced rapid growth.

Korea, Indonesia, India, Malaysia, Taiwan, Thailand and even China (at 8.3%) have low public employment as a percentage of the total population. In Singapore, it’s less than 3%. Also on the list, below 15%, are Columbia, Peru and Chile, three of South America’s strongest economies. A low number doesn’t guarantee strong growth, but a high number probably kills it.

In this context, a high number may also kill any real chance of maintaining a functioning democracy. It is notable that all of the countries noted above — with the exception of China — combine free enterprise with free elections. And that is a reminder of one of F.A. Hayek’s dicta: “Only capitalism makes democracy possible.”

It is hard to see how Egypt will ever have a flourishing democracy without a more enterprising and productive economy. And, for sure, its bloated and fractious public sector stands as a major roadblock on the path to prosperity — and greater economic as well as political freedom.

In February of 2012, my wife and I joined two other couples — old friends we had first met when living in Bahrain — on a tour of Upper Egypt. We went by boat from Luxor to Aswan and back, with several stops along the way to see some of the greatest wonders from the time of the Pharaohs. Though we were cocooned in the luxury of a guided tour, there were delays and detours that made us almost comically aware of larger problems confronting today’s Egypt. Our group had to switch boats twice — hurriedly packing and unpacking in the move to new quarters.

Our departure from Luxor was delayed for two days as we bided our time on a mostly empty tour boat. With fuel in critically short supply, Angelotel (our hosts) waited for a new group from Europe and then put us all together on a different vessel. When we finally sailed, we ran into a new obstacle. Striking workers had shut down the locks at Esna — making it impossible for our boat and dozens of others to proceed. So now Angelotel moved us by bus to another boat on the upstream side of the locks.

On the bus we saw long lines of stranded cars and buses — unable to move because nearby filling stations had run out of diesel fuel. We also saw the strange sight of lighted and speeding trains that were empty of passengers. Mahmoud, our tour guide, explained that the railroad workers had gone on strike and refused to admit passengers in moving the trains from one location to another. Like the lock workers, the railway workers were demanding higher wages from their near-bankrupt government. So what if the effect of these public sector work stoppages was to kill the golden goose (tourism) that supported all of their jobs!

I might add that this same goose was and is responsible for earning a large portion of the foreign exchange needed for the government to pay for imports of food and fuel.

Throughout these misadventures, Mahmoud, who had a degree in archeology from the University of Cairo, never lost his calm or his sense of humor. Though he is a devout Moslem and proud of the “Revolution” that toppled Mubarak, no one would mistake the gentle and always joking Mahmoud for a religious fanatic. He told us on parting: “If you would do a favor for me, please put me in your suitcase and take me with you.”

To go back to the question — “Is Egypt Hopeless?” — I would say that the simple fact that Egypt has survived as a single close-knit cultural entity for six millennia suggests that it is capable of going on for a few more years — or even a few more centuries.

Indeed, Egypt’s history is so long that the Islamic period comprises less than 20 percent of the span of Egyptian civilization. And everywhere in Egypt, there are visible reminders of the glories of the country’s pre-Islamic past.

That is something that sets Egypt apart from other Middle Eastern nations. And it is something, I believe, that inoculates most (but certainly not all) Egyptians from the recidivism that causes those who are consumed with resentment against more advanced nations to yearn for a return to the religion’s early years — a period of conquest and unceasing holy war. Mohammed consolidated power in central Arabia and the Hejaz. In little more than a century following his death in AD 632, Islamic armies marched as far west as Spain and as far east as northern India and the frontier of China.

Today’s fanatics — the ones who shout Allah Akbar before committing unspeakable crimes… and the large number of others who applaud foul deeds and insist upon the subjugation of women and the eradication of free speech — are looking for their own means for world domination. Don’t think they aren’t busy — or determined.

One last note from my trip: Having taken a dawn balloon trip in a packed gondola when we were in Luxor, my wife and I were shocked to read of the hot-air balloon crash on February 26 that took the lives of 19 European and Asian tourists near the Valley of the Kings west of the city. The pilot was one of only two survivors — jumping out of the craft after a gas hose ripped and started a fire. One of the passengers also jumped — when the craft was only 15 to 30 feet off the ground. With no one at the controls, the balloon re-ascended — climbing as high as 1,000 feet before it burst into flames and came crashing back to earth.

Fortunately for us, our balloon trip, which lasted for more than hour, was nothing but exhilarating. With about two dozen people on board, we flew across farmland and sugar cane fields, almost touching down when we reached the banks of the Nile, but rising and crossing the river — whereupon we enjoyed a magnificent aerial view of the Temple of Karnac, which we had visited on foot the previous day.

What sticks in my mind now is a conversation I had with a pharmacist from Cairo after we had landed — all of us in a jubilant mood — in another sugar cane field on the eastern edge of Luxor, or Thebes, as it was once called.

The pharmacist said that he expected the Muslim Brotherhood to win in the presidential elections in May and June — simply because they were the only party with the organizational ability to prevail in a national election. But he also said that 80 percent or more of Egyptians were firmly opposed to theocratic or Koranic government.

If the Muslim Brotherhood ignored the will of the majority, he told me, it would invite another revolution.