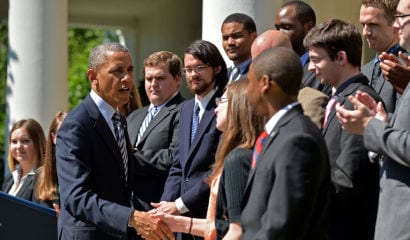 The ominous July 1 deadline, after which subsidized Stafford loan interest rates double, has now passed. The student loans monster has been unleashed.

Maybe the monster doesn’t have teeth or talons, however. There are several reasons why the doubled interest rate isn’t quite the threat many say it is, according to some economists. Neal McCluskey, associate director of Cato’s Center for Educational Freedom, suggests the damage won’t be catastrophic.

“It’s wrong to look at this as it’s typically portrayed as some sort of Armageddon for college students,” McCluskey said. “Its immediate effect — there’s no way that it’s devastating — but its long-term effects could actually be positive because what is clear is there is far too much third-party money in higher education.”

McCluskey said the new rate, which doubled from 3.4 percent to 6.8 percent, will not affect the majority of students. As noted by the Congressional Budget Office, 55.1 percent of upcoming federal student loans will be unsubsidized Stafford loans, which are not affected by the July 1 changes and have had an interest rate of 6.8 percent since 2006. Subsidized Stafford loans, which are affected and are only granted to students who demonstrate financial need, comprise 26.2 percent of federal student loans, followed by PLUS loans (17.8 percent), and finally Perkins loans (0.9 percent). To compare, PLUS loans have a fixed interest rate of 7.9 percent and Perkins loans are currently at 5 percent.

Additionally, for those affected, the extra burden isn’t exactly catastrophic — the average student will pay about $21 more per month. Assuming he pays his loan off in 10 years, that’s about $2,600 extra if the student took out the maximum amount, according to calculations by Lindsey Burke, a researcher and writer on federal and state education issues at the Heritage Foundation. (The Congressional Budget Office has come up with similar calculations.)

Burke sees a positive outcome, too, in that students may not be able to take out as many student loans. She, like McCluskey, believes that the main problem isn’t the doubled rates, but an excess of federal aid — through subsidies like loans, Pell grants, and heavily discounted interest rates — which colleges use to inflate tuition prices.

“Students are taking about double what they did in student loans 10 years ago,” Burke said. “We have a borrowing problem. We have a college cost problem.”

Although there were some differences between the House’s bill (H.R. 1911) and the president’s plan, McCluskey said they shouldn’t have killed the compromise. Both sides agreed the interest rates should be tied to the 10-year treasury rates. The House Republicans’ plan differed in that each year the rates would be reset to the market trends (plus 2.5 percent) with an option to consolidate loans with a non-fluctuating rate and a cap of 8.5 percent. Obama’s plan had the interest rate tied also to the 10-year treasury rates, but the rates wouldn’t reset — each new loan’s rate was permanent. There was also no cap in Obama’s plan.

But the compromise proved too elusive, and all progress came to a messy stop on May 31 when Obama declared at a press conference before an audience of students that the House bill “isn’t smart and it’s not fair.” McCluskey found Obama’s denouncing of the House bill surprising, especially in light of previous bipartisan progress, but he has a hunch as to why he did it.

“You get the sense that it’s because Senate Democrats didn’t want to pass anything that looked like it could possibly lead to higher interest rates,” McCluskey said.

Whether or not that is the case, it is a fact that the Senate killed the bipartisan momentum. Back on June 6, the Senate was taking up its two options: a Republican bill that was in many ways similar the House bill, and a Democratic bill that would have kept the then current interest rate of 3.4 percent for another two years. Both bills failed to pass the Senate, by margins of 40-57 (for the Republican bill) and 51-46 (for the Democratic bill).

After the failed votes, Sen. Tom Harkin (D-Iowa) said that the Senate was planning no compromise legislation because of time constraints. Harkin did say that he’d like to see a long-term solution addressing the issue when the Senate takes up the Higher Education Act reauthorization, which expires at the end of this year.

Recently, a new bipartisan bill, the Bipartisan Student Loan Certainty Act, was introduced by Senators Joe Manchin (D-W.V.), Richard Burr (R-N.C.), Tom Coburn (R-Okla.), Lamar Alexander (R-Tenn.), Angus King (I-Maine), and Tom Carper (D-Del.). The bill would set interest rates at 10-year treasury rate plus 1.85 percent for subsidized and unsubsidized undergraduate Stafford loans, plus 3.4 percent for graduate Stafford loans, and plus 4.4 percent for PLUS loans. It would be a fixed interest rate for the life of the loan and consolidated loans would have an 8.25 percent cap.