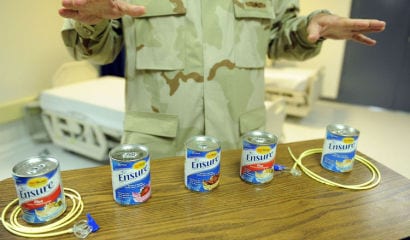 On Monday, federal judge Gladys Kessler ruled that she cannot stop the force-feeding of hunger-striking prisoners at Guantanamo Bay because her court does not have jurisdiction to change policy at the prison near the southeastern corner of Cuba.

Currently, approximately 106 of Guantanamo’s 166 detainees are classified as hunger-strikers (reportedly defined as intentionally missing 9 meals in a row), with about 45 of them currently being force-fed.

Judge Kessler went on to say that there “appears to be a consensus that force-feeding prisoners violates Article 7 of the International Covenant on Civil and Political Rights which prohibits torture or cruel, inhumane, and degrading treatment.” She notes the prisoners’ citations of statements from multiple U.S. and international organizations “condemning the force-feeding of detainees.”

The judge helpfully points out that “there is an individual who does have the authority to address the issue,” namely President Barack Obama, and proceeds to subtly chastise the president for hypocrisy by using his own words (from his May 23 speech in which, as usual, he spoke far too long in order to accomplish little but sow confusion among our allies and enemies alike):

Look at the current situation, where we are force-feeding detainees who are being held on a hunger strike… Is this who we are? Is that something our founders foresaw? Is that the America we want to leave our children? Our sense of justice is stronger than that.

Less than a month earlier, Obama said, “I don’t want these [hunger-strikers] to die.” Obama’s two statements are not so much mutually contradictory as representative of his deep desire to close the prison.

Judge Kessler concludes her 4-page ruling by pointing out that based on Article II, Section 2 of the Constitution, “the President of the United States, as Commander-in-Chief, has the authority — and power — to directly address the issue of force-feeding the detainees at Guantanamo Bay.”

For its part, the government is justifying the force-feeding as saving the prisoners’ lives, with a Pentagon spokesman saying, “We will not allow them to commit suicide. Not with hoarded pills, not with hand-fashioned weapons, and not via self- or peer-imposed starvation.”

In court hearings regarding four other Gitmo hunger-strikers, the Justice Department argued that feeding the prisoners through a nasogastric tube has the benefits of “preserving order, security and discipline within the detention facility,” limiting liability of prison officials from “lawsuits by prisoners’ estates” (this should be laugh-out-loud funny, but in today’s lawyer-cowed America it isn’t), and “preserving the health and safety of persons held in government custody, for whose welfare the public has assumed responsibility…”

In recent days, those running the prison said they would not force-feed the prisoners during daytime fasting hours through the Muslim month of Ramadan, Monday’s beginning of which brought out President Obama’s “best wishes” within hours of Judge Kessler’s ruling.

A spokesman for the prison offered assurances for those deeply upset by force-feeding during Ramadan: “We understand that observing the daytime fast and taking nothing by mouth or vein is an essential component of Muslim observance of Ramadan. And for those detainees on hunger strike we will ensure that our preservation of life through enteral feeding does not violate the tenets of their faith.” He added that Gitmo, always eager to please, has “laid in supplies of lamb, dates and honey and zamzam water.” (Zamzam is a well about 25 yards from the Kaaba, the cube-shaped mosque in Mecca that Muslims face during their daily prayers.)

Wolfgang Puck’s got nothing on Gitmo, at least not for a month, though one wonders if lamb and dates and honey can be delivered through a tube up one’s nose. If we really didn’t like the prisoners, we would put them on Michelle Obama’s school lunch plan, but that might violate the Eighth Amendment far more egregiously than a feeding tube does.

Earlier this week, Muslim hip-hop artist Yasiin Bey, better known by a prior moniker, Mos Def, got an additional 15 minutes of fame, at least among the anti-Guantanamo left, by utterly failing to tolerate the insertion of the same type of tube used to feed Gitmo’s hunger-striking prisoners. It is a remarkably odd video, including a shot of Bey’s expensive shoes and large pinky ring, followed by his being strapped to a chair and a feeding tube slightly inserted through his loud grunts before he gives up and starts crying.

The American Medical Association, the lab-coated apparatchiks of the Obama Ministry of Propaganda, sent a letter to Secretary of Defense Chuck Hagel arguing that “forced feeding of detainees violates core ethical values of the medical profession. Every competent patient has the right to refuse medical intervention, including life-sustaining interventions.”

A trio of medical ethicists, writing last month in the New England Journal of Medicine, put it starkly:

Force-feeding a competent person is not the practice of medicine; it is aggravated assault. Using a physician to assault prisoners no more changes the nature of the act than using physicians to “monitor” torture makes torture a medical procedure. Military physicians are no more entitled to betray medical ethics than military lawyers are to betray the Constitution or military chaplains are to betray their religion.

Islamic leaders in the United States and England, including the pro-terrorist Council on American-Islamic Relations (CAIR), argue that on the issue of force-feeding, “wrong is wrong” (strange how that doesn’t seem to apply to suicide bombers) and that “It’s not just a religious issue, it’s also a human rights issue in violation of international norms and medical ethics.” Like President Obama, CAIR argues against force-feeding in large part as a tactic in a broader fight to close Guantanamo.

I do not accept the argument, as Judge Kessler seems to, that force-feeding is “torture or cruel, inhumane, and degrading treatment.”

But, as difficult as this is to say, the judge and the AMA and CAIR and the UN are correct in their conclusions:

As Cornell University Law School Professor Michael Dorf notes, “Under the law of every state in the United States, competent adults have the right to refuse medical treatment and that right has generally been construed to include a right to refuse food and water.” Guantanamo is a federal facility, not subject to state laws, but Dorf — while admitting that “U.S. law remains unclear on whether jailors may forcibly feed prisoners” — lays out Supreme Court precedent that would tend to support similar conclusions regarding forced feeding.

The argument that the existence of Guantanamo is a recruiting tool for terrorists seems obviously unserious, or at least of vanishingly small import. With drone strikes taking out bad guys in Yemen and Pakistan weekly, with both sides in Egypt blaming the United States for that country’s current political situation despite an American president whose most-fired foreign policy arrow is an apology, and with a millennium of Muslim desire to subjugate or kill the infidel, will a few prisoner suicides really make the haters hate us any less?

Paraphrasing John Lennon: Imagine the delicious consternation at the United Nations and Amnesty International when their arguments lead directly to the death of prisoners. Imagine CAIR explaining why they were complicit in the deaths of coreligionists, for whom suicide is scripturally forbidden (at least when they’re not taking an infidel out with them). Imagine Barack Obama boxing himself into yet another corner.

Most importantly, imagine a world with fewer Islamofascist murderers, voluntarily removing themselves from what they see as the battlefield of human life within their war against modernity and freedom.

You may say I’m a dreamer, but I’m not the only one.

﻿Photo: UPI (“A Naval medical officer discusses how detainees on hunger strikes are cared for in the hospital at Camp Delta where detainees are housed at Naval Station Guantanamo Bay in Cuba…”)