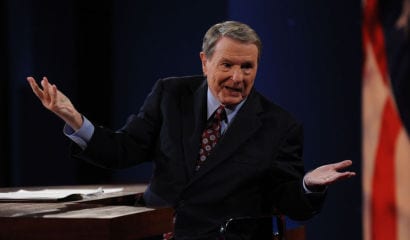 I’ve given up on network television, but I still often watch the PBS NewsHour, mostly out of habit. Until about three years ago it was run by Jim Lehrer, who today is called executive editor.  But his connection has become ever more tenuous.

Without the Lehrer anchor, I believe, the NewsHour has drifted to the left. In short, it has become more like NPR. Jim Lehrer had conservative leanings, although that accusation was rarely made against him. But why else did Republicans always welcome him to moderate presidential debates? Simple. He was the only TV news anchor not obviously leaning left, like Dan Rather, Tom Brokaw and Peter Jennings. I know, I know, all those names are out of date, but that’s because I lost track of their many successors.

The NewsHour, which today is said to have 2.7 million nightly viewers, is anchored by a rotating team including Judy Woodruff, Ray Suarez, Gwen Ifill, and Jeffrey Brown. I’ve probably forgotten one or two. Margaret Warner comes to mind, but these days she’s usually in some foreign land. What she did to deserve exile I don’t know. Reporting from Cairo or Damascus can’t be fun.

The first few segments of NewsHour are usually free of bias and priority is often given to items with footage of President Obama. But the same was true when George Bush was president and I don’t think Obama-love is the “root cause” of the problem.

The Corporation for Public Broadcasting (the entity that distributes funding to PBS and NPR) does receive a $445 million annual subsidy from the Feds, and you may recall that last October Mitt Romney threatened (during the debate moderated by Jim Lehrer) to cut that subsidy.  But again, I doubt that government funding is the source of the bias. When I last looked CBS was worse than PBS, and CBS is profit-driven.

The Brooks-Shields segment on Fridays gets a lot of attention. New York Times columnist David Brooks is the quasi-conservative of the pair, but his conservatism doesn’t extend beyond boosting the defense budget. It’s the one issue he feels strongly about. I once formulated the theory that Shields is actually to Brooks’s right. Not really—Shields is a liberal with a strong labor perspective on economic issues. But he’s more conservative than Brooks on social issues, and seems to be pro-life. Shields has real convictions, while Brooks always seems to be making career calculations.

Some NewsHour correspondents are worthy of praise: Economics correspondent Paul Solman’s “Making Sen$e” reports really do make sense. He knows, for example, that labor unions inherently cause unemployment, as do minimum wage increases. He never lapses into economist jargon, and for my money he understands the subject better than Nobelist Paul Krugman, one of the most biased economists since Karl Marx.

A nod also in Gwen Ifill’s direction. On her Friday program, Washington Week, with its tableful of liberal reporters, she sustains a mood of neutrality. Gwen is smart, has a sense of humor, and she doesn’t arouse the suspicion that she was promoted to fill a quota. How many blacks realize that that is the great curse of racial preferences?  They cast a pall of suspicion over all African Americans visible the media. Perhaps someone could mention that to Eugene Robinson, whose relentless mediocrity adorns the Washington Post op-ed page twice a week.

Finally, Supreme Court reporter Marcia Coyle strikes me as notably unbiased. I watch her segments without worrying that I am about to be misled. Where the Court is concerned, Justice Anthony Kennedy usually provides more than enough apprehension.

The trouble usually starts in the second half of the program. I will ignore the junk poetry that is sometimes broadcast at the end of the show: dull, unversified lines that some unwritten rule prescribes must always be read in a flat monotone. Since absolutely anything can be called poetry today, it’s a good way of promoting “diversity.” A transgendered native-American squaw who calls herself a poet might have fair chance of getting on the show and no one will complain. If it’s poetry, we’re all expected to applaud.

There’s an India-born reporter called Fred de Sam Lazaro who is director of the Under-Told Stories Project at St. Mary’s University in Minnesota. All his under-told stories for the NewsHour come from the Left. Why, I wonder? The news media is dominated by left-liberals, so are conservative issues never undertold? Recently he had a piece on shoddy construction projects in Bangladesh. Probable cause, according to Lazaro: Too much competition from other countries. Free trade is the problem! Maybe the problems would be solved, or at least Lazaro wouldn’t report then, if Bangladesh moved in North Korea’s direction.

Here’s an under-told story. For most of the 20th century, India was mired in socialism, largely thanks to the influence of Nehru. He went to Harrow School and then Cambridge, where he absorbed the fashionable leftism. Nehru thought there was no way to end India’s poverty “except through socialism and the ending of private property.” Private property was “worse than drink,” he thought.  More recently India rethought the Nehru nonsense and moved toward capitalism. An under-told story? Yes, but not one that would appeal to Fred de Sam.

Then there’s the San Francisco correspondent, Spencer Michels. Whenever we see him heralded, we know it will be the same story. The Bay Area hasn’t moved far enough to the left yet. Science correspondent Miles O’Brien is another who likes to look at things from the left. He might claim warrant for this because Science magazine does the same thing; as indeed it does. But wouldn’t it be nice to hear someone, just once, say that the global warming scare has been overdone? The problem is that such a story would undermine the mood of crisis needed to get the story on the air in the first place.

The fact is that the PBS NewsHour today has lots of liberals but no conservatives. In that respect, of course, it has come to resemble other TV news operations. Why is this? Hard to say. It’s just a fact of our time. An aura of unfashionableness was draped around conservative ideas about 50 years ago and it has never been possible to remove it. Government, we are implicitly told, must get bigger.  And it always does.

Sometimes I think that China will provide the antidote. The country embraced Communism for 30 years, almost ran itself into the ground, but then saw the light; at least partially. By the time they have overtaken the U.S. as I believe they will, someone here may finally ask: What did we do wrong?