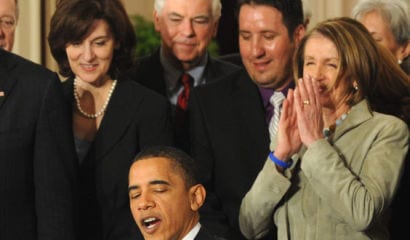 One thing that is incontrovertible about Obamacare — its brief history has been nothing if not dramatic. The plot is full of twist, turns, subterfuge, and villainy. As time goes on, the drama builds. How will this story end? Will it implode on itself? If it does, what happens then?

Democrats have dreamed of nationalized health care for decades. When it finally passed it did so without a single vote from the opposition party. That was a first for any major piece of legislation of such magnitude in the nation’s history.

At several points before its passage it appeared that the “Affordable Care Act” would be aborted. Scott Brown’s upset victory in Massachusetts opened the possibility of stopping the legislation in the Senate. Through the use of parliamentary high jinks, the Democrats were able to pass the legislation and send it to Obama for his signature.

Unlike most new laws, Obamacare included long delays before its provisions would actually take effect. The long rollout of Obamacare has allowed the tension to build. Whether or not that has worked politically, as a theatrical device it has been a great success.

Even after the Obamacare was signed into law, those of us who believed it was one of the worst ideas ever held out hope that it would be found unconstitutional by the Supreme Court. The drama once again built as the law finally found its way to the Court and testimony was presented by its defenders and opponents. Our hopes were dashed, however, when the swing vote, by way of strange and bizarre logic, somehow managed to find the law constitutional. Chief Justice John Roberts, who surprised everyone by providing the swing vote, conjured up a deus ex machina and transformed what both opponents and supporters alike considered a fine into a tax.

The latest plot twist in the story is the President’s announcement of a delay, from January 1, 2014 to January 1, 2015, in the so-called “employer mandate.” This latest development raises all kinds of new intriguing questions. Does the President even have the authority to unilaterally postpone a key provision of a law in this manner? Is it a law or just a list of suggestions? Furthermore, it’s his law, for crying out loud! How bad can it be for the administration to be forced to make such a humiliating admission of failure and incompetence?

The intrigue of Obamacare shows no signs of waning. The future outcome is like the old question of an irresistible force meeting an unmovable object.

It is hard to think of any government entitlement program being repealed ever. On the other hand, Obamacare is so badly conceived and designed, so internally inconsistent and hare-brained, that it is impossible to imagine how it will ever come anywhere close to being workable. The authors of Obamacare behaved as though a complete overhaul of one-sixth of the economy was no more complicated than changing a light bulb. Obamacare is naively ambitious beyond all imagining. This time the government may have bitten off more than it can chew.

Many observers believe the law’s architects always knew it could not work. Obamacare could just be a way station on the road to a more complete takeover of the health care industry such as the so-called “single payer” idea. Statists like Obama want the government to have total responsibility for the citizenry’s health.

It could well be that Obama, Pelosi, and Harry Reid knew from the beginning that Obamacare was doomed. After the inevitable catastrophe they can then say that a partial takeover was not successful but a complete takeover would be.

Will voters buy that line of reasoning? It’s another part of the suspense that will keep many of us on the edges of our seats.

Some of the plot twists are unique. For possibly the first time in its history the Wall Street Journal felt compelled to apologize to its readers. Although the Journal had been opposed to Obamacare from its inception, “It turns out we weren’t nearly critical enough,” admitted the Journal in a lead editorial.

The Obamacare saga is not all drama and suspense. It also has its moments of levity. Recently, for example, the administration recruited 17,000 of the nation’s librarians for their help in selling the public on the benefits of the program’s health care “exchanges.”

So far as I know this is the first time in history that anyone has thought to ask librarians to sell anything, let alone something as obtuse as a government health care program. All the librarians I’ve ever met have been quite nice people, but I’ve never thought of them as salesmen or sales women. And how much interaction with the public do librarians usually have? Whoever conceived the plan must have done it more for laughs than actual results.

Another joke that’s been recently added to the routine is putting Obamacare’s individual health care subsidy on the honor system. Because objectively documenting millions of applicants’ eligibility would be a monumental undertaking, the administration has decided to use the wildly popular, but unfortunately disastrous, “liar loan” doctrine. According to the new directive, “The exchange may accept the applicant’s attestation regarding enrollment in an eligible employer-sponsored plan… without further verification.”

Often the Obamacare script becomes a little too farfetched and strains the audiences’ credulity. The President’s line, “If you like the insurance you have now you’ll be able to keep it,” is getting harder and harder to swallow. Another of the promises that’s hard to believe is, “This won’t cost a dime.” Was the act’s official title, “The Affordable Care Act” meant to be ironic?

George H. W. Bush lost his reelection bid because he broke one promise (“No new taxes”). Obama was smart enough to avoid the phrase, “Read my lips,” before making any of his promises.

The end of Obamacare could be like the penultimate scene in the movie classic Zorba the Greek. Zorba has conceived and arranged to have built a way to get logs from a forest high on a hill to the seashore as a way to transport them to saw mills. That would provide a real lift to the local economy. It’s kind of a reverse ski lift, a cable supported by towers with slings to hold the logs. Unfortunately, the mass and velocity of the logs is far too much for the towers, and the whole apparatus disintegrates after about two logs have been sent down. It’s quite a scene with those gathered to celebrate the occasion running for their lives.

We can only hope that the final outcome of Obamacare doesn’t have us all running for our lives.