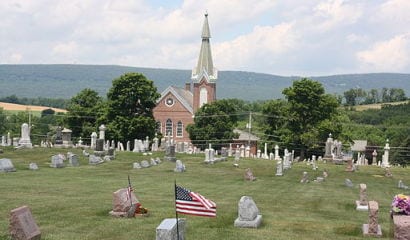 Although America’s arguably most liberal Protestant denomination and consequently likely fastest declining, the United Church of Christ is not very concerned about evangelism. Instead, the UCC, or at least its elites, is always searching for a new leftist cause to animate the true believers in progressive religion. At their recent General Synod, the distant descendants of the Pilgrim Fathers targeted the Devil’s great tool for subverting the planet: fossil fuels.

“The realities of climate change require prophetic and strategic action by people of faith seeking to be faithful to the everlasting covenant God has made with us, with every living creature and with all future generations,” intoned a summary of the resolution, which originated in Massachusetts. “If fossil fuel companies simply fulfill their purpose the earth will become inhospitable to life as we know it.”

Terrified of Global Warming, like the witch-hunts of old, the solemn assembly of often rainbow clad divines resolved to divest church pension funds from oil, gas, and coal, with some caveats lest it become too inconvenient or costly. But they achieved their purpose of becoming the first major U.S. denomination to reject at least in theory profits from ravaging the earth.

“This resolution becomes a model for all faith communities who care about God’s creation and recognize the urgent scientific mandate to keep at least 80 percent of the known oil, gas and coal reserves in the ground,” explained the measure’s proponent. “This vote expresses our commitment to the future. By this vote, we are amplifying our conviction with our money.”

By 2013 the denomination is now pledged to divest from fossil fuels by 2018, except for firms that are environmentally “best in class,” which the resolution’s proponent called a likely “oxymoron,” since such firms are evidently inherently evil.

Still retaining some memory of old time Puritan self-abnegation, a UCC investment fund spokesman extolled the mandated “difficult changes to the way we live each day of our lives,” and added that “Creation deserves nothing less from us.” The pensions board pledged to implement these sacrifices to the extent their fiduciary responsibilities allow.

Apparently there was not total consensus on fossil fuel divestment. Some delegates, evidently lacking the spiritual discernment to envision the new fuel-less nirvana, asked about the economic impact on states reliant on the fossil fuel industry. “Let’s talk real divestment here,” an Iowa delegate exclaimed. “Divest yourself of your airline tickets and find a non-carbon way to go home.”

Likely few took the advice. Decrying fossil fuels is typically the hobby of the wealthy and comfortable, who fantasize of a world where everybody drives a Prius and has designer solar panels. Like other shrinking old line Protestant denominations, the UCC, despite its advertised aspirations of “extravagant welcome,” is an almost all white, mostly upper middle class set that is rooted strongly in New England.

Pillorying the oil companies is easy fare for this crowd, which is mostly insulated from the gritty realities of economic survival. “That’s right — we’re essentially asking them to walk away from $20 trillion in resources,” boasted one UCC cleric about oil companies. “The only power we have in this challenge is the moral, spiritual power to revoke the social licenses of these companies to continue to profit from wrecking the earth,” she surmised. “The question is — will we exercise that power?”

While demanding that oil companies keep 80 percent of fossil fuel resources untouched, the UCC resolution’s supportive explanation, citing “extreme weather events like Hurricane Sandy and the drought, wildfires, and floods that preceded it,” temperately insists: “The CEOs at fossil fuel companies are the radicals.” So there!

Of course, the UCC stance and its supporters don’t admit that global temperatures haven’t risen in 16 years, which might slightly deflate their crisis rhetoric demanding the global economy shut down lest the planet boil.

The world, thanks to improving retrieval technology, now faces an unprecedented future of fossil fuel plenty. Oil’s discovery and development in the 19th century increased the material living standards of humanity as nothing had in all the previous millennia combined. How ironic that the fossilized detritus of long dead living organisms, manifested in oil and gas, along with otherwise useless rocks like coal, should enable the miraculous wonders of prosperity and comfort for billions of otherwise impoverished people.

New discoveries and improved harvesting of fossil fuels ultimately will enable hundreds of millions more who now hover at subsistence levels to have electricity, refrigeration, reliable heat and cooling, and safer transportation, almond with healthier, longer lives for themselves and their children.

The UCC’s hardy pioneer ancestors who hacked a great civilization out of New England ‘s howling wilderness would hail the miracles of fossil fuels as divine beneficence. But their descendants instead scowl. It’s hard work being a liberal Protestant, maintaining empty old churches, and always hunting for a new cause. But God’s Kingdom and common sense will move ahead with or without the UCC and its fossil fuel preoccupations.