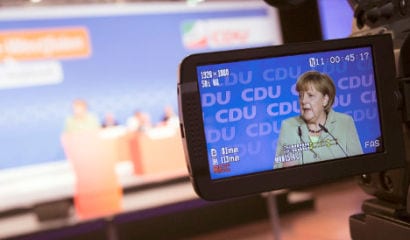 Political opponents of Angela Merkel are using the exposure of the U.S. National Security Agency’s electronic surveillance of members of the European Union as part of their own attack on the German chancellor. Shocking! How dare the Americans launch an international program of broad communications surveillance?

This political angst is so transparent it is surprising that the world press has fallen for it, except that anything showing the U.S. in a bad light seems to be good copy — even in the U.S. The fact that this American program takes attention away from the domestic and international spying activities of the rest of the world is a boon for all those other intelligence organizations.

The argument on the uniqueness of the NSA activity was best feigned with horror by the French minister, Fleur Pellerin, when she was widely quoted as saying, “…generalized surveillance of populations — that’s an affair completely different from espionage; it’s much more serious.” Ms. Pellerin apparently is unaware that liaison information sharing of the international NSA surveillance activity is extremely important to the French government’s own anti-terrorist operations. This is to say nothing of entire “populations” of consumers who are tracked on the Internet to determine and catalogue their online activities for commercial purposes.

The crocodile tears shed for the so-called “privacy rights” of citizens and organizations around the world do not seem to create much concern for powerful central governments such as Russia and China. They have expected the United States, with UK assistance, to be pursuing such efforts. The Russian spy satellites have known all about the “storage facilities” so clearly standing in the Utah desert. After all, they and their Chinese counterparts expect the United States to be tracking terrorist bad guys around the globe in addition to gathering scientific/technological intelligence. Both countries, themselves, have extensive international electronic surveillance facilities.

In fact, from an intelligence standpoint the shortcoming of the NSA data mining program is that it does not automatically invade the communication exchanges of targets unless they have gone through the process of gaining legal warrants. The scores of nations, large and small, around the world that think little or nothing regarding warrant-less search and seizure would love to “plug in” to the NSA capability.

Electronic communication surveillance has evolved considerably since the days when the Gestapo bugged the entire central telephone system of Paris — and which was never dismantled after De Gaulle came to power. Of course this earlier high-tech operation simply supplemented the traditional methods of French police and security that since before World War I had coopted each residential concierge as a full-time informant. So much for French “generalized surveillance of populations.”

Replacing humint and point-to-point intercept with a global electronic data collection was an outgrowth of the counter-ULTRA program of World War II made possible initially by the brilliant work of Polish intelligence in acquiring the unique German encryption machine, “Enigma.” Interception and decryption of German international security radio communication as well as specific military instructions was an invaluable informational aid for the Allied command. The NSA program today is a continuing ramification of the earlier gathering mechanism. That the principal enemy today is a broad-based terror movement deeply imbedded in the civilian population does not negate the appropriateness of its existence. This is in spite of the politically self-serving aspect of the highly publicized objections.

In addition to French dérangement over the U.S./UK technological achievement, there has been a very convenient uproar over possible information exploitation in the current U.S./Europe trade negotiations. The covert exchange of supposedly “top secret” economic and financial data has been the unspoken but widely known factor for many years in international negotiations. Additionally, when was the last time any Ministry of Finance official could keep his mouth shut? Throughout Europe it is well known that the host governments target electronic communications of resident official missions in which they have an interest as well as selected foreign business and individuals.

The most elaborate and broadly targeted intercept program in the past was run from the roof of the Russian residence facility in Scarsdale, Bronx, New York. The antennas on the roof there and on the top of the Russian Permanent Mission to the U.N. could cover an area out to 40 miles, picking up any and all microwave transmitted telephone communication. This included all official, private, and commercial calls. The only problem was in discrimination of the intercepts. Those not of immediate interest operationally were sent back to Moscow for recovery and review. This may seem primitive now compared to NSA’s programs, but for a considerable interval the Russians picked up a substantial collection of official communication and business/financial information — much of it from private conversations.

As far as Ed Snowden is concerned, it is obvious that neither China nor Russia needed his self-characterized “highly classified” computer “take.” Not only do they and all the first-line countries not need this subjective material, but the threatened political estrangement with the USA isn’t worth the effort. He, personally, may have some propaganda value for the third ranked anti-U.S. crowd, but not for the big boys. The possible exposure of the software of American data collection (mining) and analysis is another issue entirely. This has been and is a high value intelligence target. No matter Snowden’s professed reasons, he ultimately is guilty of its theft.