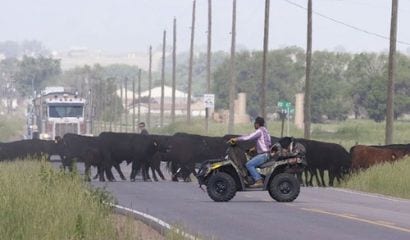 If you want to see how the press acts like a bunch of hysterical ninnies, just look at the way an article in Science about earthquakes and underground wastewater storage pools has been distorted into a national alarm about fracking.

By the time you read this, you will have already read the headline somewhere: “Scientists Say Fracking Causing Earthquakes.” Here’s what actually happened.

Last week Science published two articles relating earthquakes to energy development. One is by Nicholas van der Elst of Columbia University’s Lamont-Doherty Geological Laboratory in Palisades, New York. The other is by Emily Brodsky at the University of California, Santa Cruz.

The van der Elst article says the following. When major earthquakes occur in other parts of the world, they are found to cause tremors in geological repositories where wastewater is being stored from oil and gas well and other such operations. These tremors are small and often barely detectable. They actually occur all the time as the result of distant quakes around the world. But van der Elst says that they have increased in recent years as the wastewater disposal sites have grown.

The report says absolutely nothng about fracking except that the new fracking technology has led to the creation of a few new wastewater wells that may be having the same effect as the conventional oil-and-gas repositories  that have been operating for decades. In fact the report specifically says that the technique of fracking is not implicated. Fracking pumps only relatively small amounts of highly pressurized water into shale rock in order to loosen the oil. That is not the problem. It is the much larger wastewater repositories common to all oil and gas drilling (and some other technologies as well) that are implicated.

Now let’s look at some of the headlines that have resulted from this report:

Now the interesting thing is this. The second study, by Emily Brodsky at Santa Cruz, specifically links a California geothermal well to an earthquake incident. In fact, it has long been known that geothermal wells increase earthquake vulnerability. Geothermal sites are found exclusively along earthquake fault lines and in volcanic zones. They are cracks and fissures where groundwater is being heated by exposed magma and evaporating to the surface. That is why geothermal energy has been developed almost exclusively along California’s San Andreas Fault and on volcanic islands such as New Zealand, Iceland, and Hawaii. But when these sites are tapped for energy the water pressure sometimes begins to slacken and it becomes necessary to inject new water into the fissures to keep sufficient steam evaporating. This introduction of new water has long been recognized as capable of aggravating the instability beneath the earth’s surface and causing earthquakes.

But wait a minute!  Geotheormal is classified as “renewable” and therefore a good form of energy (even though it actually derives from the radioactive disintegration of uranium and thorium in the earth’s crust).  Therefore it is immune from criticism.  Try finding a headline reporting that geothermal sites increase the danger of earthquakes. You won’t.

So is the press biased in its coverage of fracking and other forms of energy?  Could there be any better example than these latest headlines?