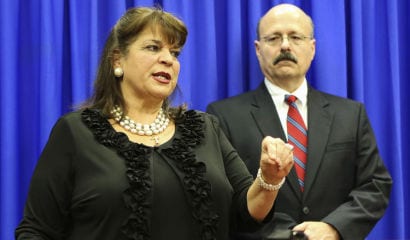 Acting as if she came in an impressive second on a highly rated game show, Florida state attorney Angela Corey continues to make the rounds on television. These interviews cement her reputation as a crass pol pretending to be a prosecutor. If she didn’t have the protection of the mob and the sympathy of the media, she wouldn’t dare show her face on these shows, much less call Zimmerman a “murderer,” which is a breach of the most basic post-trial decorum for defeated prosecutors.

The treatment of Zimmerman is worthy of a Kafka novel. A jury finds him not guilty of a trumped-up charge and then he wakes up to find the same malicious prosecutors still slandering him as a “murderer,” questioning his constitutional rights (he “better be careful” with his returned gun, warned one of them), and suggesting that he was “lucky.” Meanwhile, the attorney general of the country confers his blessings upon the hucksters who turned him into a national scapegoat while the president makes a statement honoring his aggressor.

It is no wonder that Don West, one of Zimmerman’s attorneys, refused to shake the hands of the prosecutors after the verdict. This was a grotesque farce, only stopped by a jury not under the spell of race baiters.

CNN’s interview with an anonymous juror from the trial — “Juror B-37” — reveals that Corey’s maniacal campaign to demonize Zimmerman failed utterly. Speaking to Anderson Cooper, this juror reduced the case to what it always was, a simple matter of self-defense. All the evidence pointed to Martin as the “aggressor,” she said. He threw the first punch; he was on top of him; Zimmerman had the wounds; Zimmerman was the one screaming.

As to the question of whether or not Zimmerman had profiled Martin, this juror indicated that it wasn’t legally relevant or even particularly damning. She seemed to agree that Martin’s behavior was suspicious:

…he was cutting through the back, it was raining. He said he was looking in houses as he was walking down the road. Kind of just not having a purpose to where he was going. He was stopping and starting. But I mean, that’s George’s rendition of it, but I think the situation where Trayvon got into him being late at night, dark at night, raining, and anybody would think anybody walking down the road stopping and turning and looking, if that’s exactly what happened, is suspicious. And George said that he didn’t recognize who he was.

The prosecutors had staked their case on victimology and wild assertions about the evil of Zimmerman’s “heart.” Both strategies fell flat with this juror, who saw the encounter not as a crime but as a tragedy and saw Zimmerman as a caring if “overeager” neighborhood watch volunteer. She recalled the testimony of the “the lady who got broken in and robbed, while her baby and her were upstairs” and noted that Zimmerman “came over and he offered her a lock for her backsliding glass door. He offered her his phone number, his wife’s phone number. He told her that she could come over if she felt stressed or she needed anybody, come over to their house, sit down, have dinner. Not anybody — I mean, you have to have a heart to do that and care and help people.”

Pressed by Cooper on whether or not she would want Zimmerman as a neighborhood watch volunteer in her neighborhood, she said yes: “I think he was frustrated with the whole situation in the neighborhood, with the break-ins and the robberies. And they actually arrested somebody not that long ago. I — I mean, I would feel comfortable having George, but I think he’s learned a good lesson.”

Momentary imprudence in getting out of his car seemed to be the only fault she found in him. But it is not clear if she thought that he had followed Martin after that point, a gap in events that the prosecution never filled. She even faulted the 911 operator for not giving Zimmerman more explicit instructions: “When he was in the car and he called 911, he shouldn’t have gotten out of that car. But the 911 operator also, when he was talking to him, kind of egged him on. I don’t know if it’s their policy to tell them what to do, not to get out of the car, to stay in their car. But I think he should have said, stay in your car, not can you see where he’s gone.”

One imagines that Angela Corey’s phony smile disappeared from her face as she listened to this interview. Nothing the prosecution threw at Zimmerman stuck, judging by this juror. After this debacle, Corey’s future as a prosecutor looks bleak. If she wants to keep calling Zimmerman a murderer, she will have to do it as a panelist on MSNBC, that final destination point for disgraced demagogues.