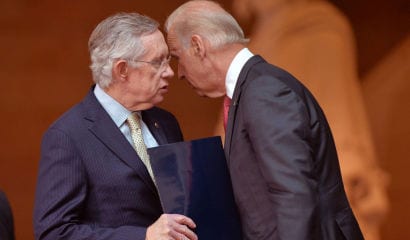 It wasn’t true when he said it, but maybe it was aspirational.

On Sunday, Senate Majority Leader Harry Reid (D-Nv) told Meet the Press that Congress wasn’t as popular with Americans as the North Koreans are. Reid said, “Is there anyone out there in the world, real world, that believes that what`s going on in the Congress of the United States is good? Our approval rating is lower than North Korea`s.”

(Yesterday’s RealClearPolitics average of major polls found that congressional approval was at 13.6%. As bloated as the congressional bureaucracy may be, that 13.6% can’t only be relatives and employees of Congress. Public Policy Polling found in January that Congress was less popular than root canals, head lice, colonoscopies, traffic jams, Donald Trump, Genghis Khan, used-car salesmen, Brussels sprouts, cockroaches and even France. But it did beat North Korea by a large margin. Except for a couple of outlier polls, Congress is still more popular than the Norks.)

Reid’s comment was directed to his threat to change the Senate’s rules to eliminate the filibuster of presidential nominees. It’s referred to as the “nuclear option” because to accomplish it the Senate’s majority — be they Democrats or Republicans at the time — would have had to have their president pro tempore rule that the rule requiring that the Senate’s rules could only be changed by two-thirds vote (67 senators) was unconstitutional and then vote by simple majority to eliminate the filibuster.

On Sunday, a Washington Post Sunday editorial said, “Cooler heads should prevail, and Republicans should back down.” It didn’t work out that way. At least not quite. And it certainly won’t raise the Congress’s standing with Americans.

The threat by a majority party in the Senate to “go nuclear” happens every few years. The last time it was seriously being considered in 2005, Bill Frist (R-Tenn.) was Senate Majority Leader. And it was over the same issue, a president being thwarted by the minority in appointing his choices to courts and agencies.

At that time the Democrats’ luminaries had different views. Howlin’ Howie Dean, then chairman of the Democratic National Committee, said Republicans were going to “blow up 200 years of Senate history” just to get a handful of “radical” judicial nominees confirmed. The junior senator from Illinois said, “What [the American people] don’t expect is for one party — be it Republican or Democrat — to change the rules in the middle of the game so that they can make all the decisions while the other party is told to sit down and keep quiet.” That, of course, was Barack Obama.

This time, the Dems were threatening to go nuclear over seven nominees: Richard Cordray, to the Consumer Financial Protection Board, Richard Griffin and Sharon Block to the National Labor Relations Boar (NLRB), and three others including the execrable Thomas Perez, who has been nominated to be Secretary of Labor.

Reid’s threat to go nuclear was brought about by severe pressure from the labor unions who desperately wanted the NLRB confirmations. The White House approved because these are the two NLRB “recess appointments” that Obama made that have been held unconstitutional (not merely illegal) by the lower courts in exceptionally strong terms. If the Dems had gone nuclear over these confirmations and pushed them through, the Supreme Court would have held the question of their constitutionality moot.

If the Republicans had backed down, as the Post suggested, they would have put themselves on record as endorsing Obama’s unconstitutional action.

The temptation was great. With Janet Napolitano’s resignation from the Homeland Security post, there’s sure to be a bloody fight on her replacement who will be held to account for her refusal to enforce the immigration laws, TSA’s depredations, and so much more.

Late into Monday night, the Senate met (98 of 100 attending) to try to break the deadlock over these nominees. As we go to press the deal, such as it is, isn’t terrible. Perhaps not bad enough for Reid’s wish to be less popular than the North Koreans to be fulfilled.

The deal says that two new NLRB nominees will be sent up for confirmation and — apparently – confirmed without filibuster.

The deal will do nothing to improve the public’s opinion of Congress because, for one thing, very few knew or cared about the whole “nuclear option” issue. For another, it appears to be just another big harrumph from the “world’s greatest deliberative body.” But there are a few meager reasons to be encouraged.

First and foremost, the deal represents a victory of sorts for Minority Leader Mitch McConnell. As desperate as Reid and his cohorts were to ratify Obama’s unconstitutional NLRB nominations — and despite Sen. Dick Durbin’s claim that they had the votes — Reid apparently didn’t have the number of votes he wanted. As one very senior Dem senator said at a confidential breakfast meeting on Tuesday, the Dems really didn’t want to go nuclear: they’d promised long ago that they wouldn’t abuse the power of the majority.

Second, it’s another setback for Obama. It’s easy to see why Obama would want Reid to go nuclear. He’d have the ability to get Senate confirmation of anyone to any job. Think about how many more Supreme Court justices like Elena Kagan and lower court judges of the same ilk he could appoint in the next three years. How many more Tom Perez’s or Chuck Hagels would be able to join the cabinet or serve in subcabinet jobs.

With the deal, the Republicans retain some level of control over these appointments.

Third, and possibly most importantly, the Senate remains different from the House, as it’s supposed to be. The Senate isn’t the target of as much mockery as it deserves. Harry Reid has turned it into a House clone by abusing his power to deny Republicans the chance to amend bills, by forcing nominations through without real hearings where nominees can be questioned, and in too many other ways. Reid’s partisanship is at a level unseen since time when the Missouri Compromise nearly tore the nation apart, and when the Confederacy actually did. The Dems may not hesitate again.

But with the retention of the filibuster, the Republicans still have a voice at least for the time being. If the Democrats retain control of the Senate in 2014, don’t count on that fact lasting. Obama’s endgame — and Reid’s — may guarantee that the nuclear option will be exercised. After that, the deluge.