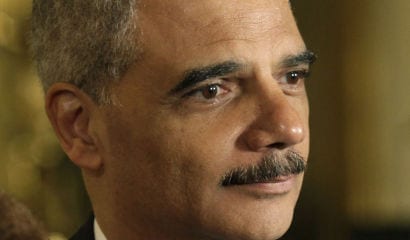 There’s a strategy and consistency in the statements by President Obama and his administration in the aftermath of the verdict that freed George Zimmerman. Whether it’s Attorney General Holder attacking thirty states’ “stand your ground” laws, the president saying he “could have been” Trayvon Martin thirty five years ago, or HHS Secretary Kathleen Sebelius saying that opponents of Obamacare are racists, it’s the same play out of the same Obama playbook.

The three statements are different, but all have the same objective: to prevent an electoral disaster in 2014 for the Democrats. Let’s take them in reverse chronological order.

Obama’s Friday remarks were divisive, not — as the Washington Post and other liberal media are saying — some effort to bring calm. Obama made his usual effort to sound reasonable, saying that the trial was conducted in a professional manner, the defense and prosecution made their arguments and the jury rendered a verdict. “That’s how our system works,” he said.

But then he wanted to put the verdict in “context,” he said, so he went on:

That, he said, explains why people are frustrated. At what? Though Obama didn’t say it, he obviously meant at the Zimmerman verdict.

And then he made his biggest point:

So folks understand the challenges that exist for African-American boys. But they get frustrated, I think, if they feel that there’s no context for it and that context is being denied. And that all contributes I think to a sense that if a white male teen was involved in the same kind of scenario, that, from top to bottom, both the outcome and the aftermath might have been different.

That’s as direct an accusation of racism in the Florida jury as there can ever be. Obama said that if a black teen had been the shooter and the white man the victim, the black teen would have been found guilty.

And this is typical Obama. What Al Sharpton doesn’t do for him, Obama will do himself to sow racial strife, to polarize and to divide. And remember: this man does nothing, and permits his administration to do nothing, unless it has a political purpose. Obama wants to keep black people angry about racism, real or imaginary, lest they fail to get out the vote next year to support his Democrats and his agenda.

On Tuesday, we were treated to HHS Secretary Kathleen Sebelius’ comparison of people who oppose Obamacare to those who fought against the civil rights movement in the 1960s. She told the NAACP:

The Affordable Care Act is the most powerful law for reducing health disparities since Medicare and Medicaid were created in 1965, the same year the Voting Rights Act was also enacted.

That significance hits especially close to home. My father was a congressman from Cincinnati who voted for each of those critical civil rights laws, and who represented a district near where the late Reverend Fred Shuttlesworth lived and preached.”

The same arguments against change, the same fear and misinformation that opponents used then are the same ones opponents are spreading now. “This won’t work,” “Slow down,” “Let’s wait,” they say.

Health disparities? Did she mean that Obamacare would help cure the ill and lame? Apparently she did. And does she believe, as this implies, that black people aren’t as healthy as whites, but Obamacare would make them equal? Yes, she does. And, of course, anyone who would oppose that sort of equality must be as racist as Strom Thurmond was in his youth, or Al Gore Sr. was in his prime.

All Sebelius was saying was the healthcare version of what Obama said later and for the same reason.

Even worse was Eric Holder’s attack on self-defense made on the same day — and to the same NAACP audience — as Sebelius’ attack on Obamacare opponents. Holder said that “stand your ground” laws, which thirty states have enacted, “…sow dangerous conflict in our neighborhoods.”

In the money quote, Holder said:

We must examine laws that take this further by eliminating the common-sense and age-old requirement that people who feel threatened have a duty to retreat, outside their home, if they can do so safely. By allowing and perhaps encouraging violent situations to escalate in public, such laws undermine public safety.

If the president can impose context, so can we.

The Zimmerman case never raised the issue of the Florida “stand your ground” law. It didn’t because Zimmerman — again, on the ground on his back, his head being bashed to the ground — had no opportunity to retreat. As the jury quite apparently believed, his choice was to defend himself or be killed.

According to reports on the FBI’s investigation of the Martin death, there is no evidence of a racial motivation in Zimmerman’s acts. But Holder imputes a racial motivation in enacting the law and a racial result of that without evidence of either. He is saying that the “stand your ground law” disproportionately and unjustly results in more deaths of blacks than whites. Which is the same as Obama said on Friday when he said if the roles of Martin and Zimmerman had been reversed, there would have been a different verdict.

A person who is not engaged in an unlawful activity and who is attacked in any other place where he or she has a right to be has no duty to retreat and has the right to stand his or her ground and meet force with force, including deadly force, if he or she reasonably believes it is necessary to do so to prevent death or great bodily harm to himself or herself or another or to prevent the commission of a forcible felony.

So if you if you are engaged in an unlawful act — such as beating, stabbing or robbing someone else — the person defending himself can use force up to and including deadly force to defend himself or another or to prevent a violent crime. That’s not just the law in Florida: it’s common sense and common law.

There’s nothing in that law that is inconsistent with America’s Constitution, law or tradition. To the contrary, the right of self-defense is older than America. It has been part of the English common law for hundreds of years (though England has abandoned it to political correctness).

Eric Holder’s imputation of racial motivation and impact with regard to these laws is just like Sebelius’s Obamacare speech and Obama’s riff on the Zimmerman case. They are all intended to fan the flames of racism where none exists.

There is no reason for any state to reexamine or repeal their “castle doctrine” — i.e., “stand your ground” laws — for any reason far less the imputations of racism which the Obama regime traffics in so blithely. As I’ve written before, in this age of disenlightenment self-defense isn’t just a right: it’s a duty.

The president’s agenda is dead on Capitol Hill unless Republicans lose their last drop of courage and pass an immigration bill this year. Obama can see that probably more clearly than John McCain or John Boehner can. All Obama can do is to fan the flames and hope that he can slide past 2014 without letting the Republicans take the Senate. We’ll see.