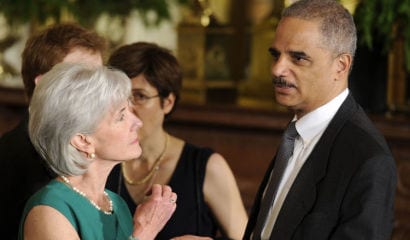 When Obama’s Secretary of Health and Human Services strode to the podium at last week’s NAACP conference, it was expected that she would engage in a certain amount of pandering to the grievance mongers who have long since taken control of that once-great organization. Such tawdry displays are, after all, a standard feature of the Democrat repertoire. It isn’t clear, however, that anyone anticipated the depth of sheer demagoguery to which she would descend in that speech. She compared Obamacare’s opponents to the people who opposed civil rights during the 1960s, embroidered her father’s civil rights record, and even added gratuitous remarks about Trayvon Martin.

Sebelius introduced this admixture of vitriol as follows: “The Affordable Care Act is the most powerful law for reducing health disparities since Medicare and Medicaid were created in 1965, the same year the Voting Rights Act was also enacted … The same arguments against change, the same fear and misinformation that opponents used then are the same ones opponents are spreading now. ‘This won’t work,’ ‘slow down,’ ‘let’s wait’ — they say.” Never mind that it was the members of Sebelius’ own political party who were making those arguments. Forget that the sweaty politicians we’ve seen railing against desegregation in those grainy old newsreels were all Democrats.

She then brought up dear old Dad: “That significance hits especially close to home. My father was a Congressman from Cincinnati who voted for each of those critical civil rights laws, and who represented a district near where the late Reverend Fred Shuttlesworth lived and preached.” Sebelius’s father is John Gilligan, who spent one term in the House during the 89th Congress. And, despite her insinuation that he was a civil rights pioneer, the record reveals that he wasn’t in Congress when many of the important civil rights laws were passed. Nor does Gilligan’s record support his daughter’s claim that he always voted on the right side of “each of those critical civil rights laws.”

The roll call on the one piece of legislation she mentions suggests Gilligan was nothing more than a pliant backbencher. He voted precisely the way all of Ohio’s 14 Republicans and 9 Democrats voted. But there was more going on in that session of Congress than the Voting Rights Act. During the second year of his term, for example, House Vote # 289 required him to vote on an amendment to the Civil Rights Act of 1966 that would have permitted “a real estate broker or his agent to discriminate in the sale or rental of a dwelling.” Dear old Dad voted “Aye” on that dubious measure. In other words, Congressman Gilligan was hardly an island of virtue in a sea of racism.

These are mere facts, of course, and Commissar Sebelius has little interest is such things. She is, however, obviously willing to promulgate fiction about a parent if it serves the political interests of her party in an important election cycle. In this, she is following the lead of the President. Obama, you will recall, told us during his first presidential campaign that his heartfelt passion for “reforming” American health care was due largely to painful childhood memories of his seriously ill mother “worrying about whether her insurer would claim her illness was a preexisting condition.” This tale of woe turned out to be one of the President’s trademark whoppers, of course.

The President also provides the model for the race-baiting Sebelius engaged in at the NAACP conference. Last Friday, for example, Obama made the following preposterous assertion: “When Trayvon Martin was first shot, I said that this could have been my son … Another way of saying that is Trayvon Martin could have been me 35 years ago.” It goes without saying that none of the “reporters” present pointed out that President Obama is a Harvard man who owns a home in Hyde Park, an exclusive Chicago enclave with no need for a neighborhood watch, where his hypothetical son would have been immediately recognized as just another child of privilege.

Unfortunately, no matter how preposterous, race-baiting has long been an effective part of the Obama regime’s campaign repertoire. Remember the 2007 Democrat primaries, when the husband of Obama’s main rival for the presidential nomination was successfully labeled a racist despite his immense popularity among African Americans? And, make no mistake, the Sebelius NAACP speech was nothing more or less than a campaign event. Its purpose was to help avert a midterm election disaster in 2014 comparable to that which they suffered in 2010. That year, they lost the House due to Obamacare’s passage. Next year, they may lose the Senate because of its botched implementation.

This possibility is by no means as far-fetched as many believe. Several unexpected changes in the political landscape, particularly in Montana, work in the GOP’s favor. Last week, Nate Silver wrote in the New York Times that “Republicans might now be close to even-money to win control of the chamber after next year’s elections. Our best guess … is that Republicans will end up with somewhere between 50 and 51 Senate seats after 2014, putting them right on the threshold of a majority.” This sentiment is echoed at Real Clear Politics by Sean Trende: “For the first time this cycle, we can discuss a GOP takeover of the upper chamber in more than hypothetical terms.”

So Sebelius was dispatched to the NAACP convention ostensibly to talk about the “benefits” of Obamacare, but in reality to help frighten African-Americans into showing up at the polls next year despite the absence of Obama’s name on the ballot. Thus her gratuitous comments about the Zimmerman-Martin incident: “The death of Trayvon Martin was a tragedy for his family, but also for our country.… We pray for his family and respect their call for calm reflection.” In reality, what Sebelius, the President and their accomplices actually “pray for” is fear in the African-American community that a Republican victory in 2014 means the return of Jim Crow.

This is why she conflated the ongoing battle over Obamacare with the civil rights struggles of the Sixties: “History shows that upholding our founding principles demands continuous work.… You showed it in the fight against lynching and the fight for desegregation.… And you showed it by supporting a health law 100 years in the making.” That this comparison trivialized the civil rights movement meant nothing to Sebelius. She just soldiered on with her call for more faux progress: “We can’t slow down. We can’t wait. We won’t turn back.” But we have already “turned back” if crooks and liars like Sebelius and her boss can get away with this kind of naked race-baiting.