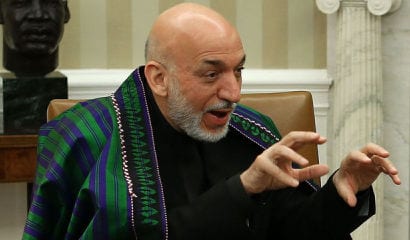 It’s not about gratitude or the lack of it. It’s not about anti-Americanism or even arrogance. The current dispute over customs duties between the American military and Karzai’s Kabul Kleptocrats is only about corruption.

As the story goes, once the Taliban were toppled from power, when U.S. military equipment — tooth and tail, bullets and MRE’s — was shipped into Afghanistan over the past twelve years, it was exempted from customs duties and taxes by an agreement between the two governments.

Now, the lower case kkk gang claims that none of that equipment can be removed from Afghanistan unless it has a validated customs form attached to it. And, because about 70,000 truckloads have already passed over the Afghan border — most of it to Pakistani ports where it can be picked up by cargo ship — the Afghans are demanding more than $70 million in “fines” for improper exporting.

And, at times, they’ve closed the border to make their point whereupon U.S. officials have shipped the cargo out by air at a cost of five to seven times the amount it costs for ground shipments.

(You may wonder why the air shipments aren’t stopped by the Afghans or why they aren’t subjected to the same customs duties and fines. Isn’t it the same question of sovereignty that supposedly prevented us from sending combat aircraft into Benghazi when the mission there was under attack on the anniversary of 9/11? Is Afghan “sovereignty” less subject to violation than its Libyan equivalent? You see, we didn’t have Libyan permission to cross their border even to save American lives and you could be confused by the inconsistency between Libyan entry and Afghan exit. But I digress.)

Afghan Finance Minister Omar Zakhilwal is quoted by the New York Times as claiming that the Afghans are giving us a discount. He is conveniently ignoring the prior agreements on duty-free imports and now claiming that black market sales of military fuel are having an anti-competitive effect on the Afghan marketplace.

Zakhilwal told the Times that it’s not about money, just respect for Afghan law. And he says that the Afghanis are giving us a big discount on what’s owed: “The duties owed to us run into hundreds of millions of dollars.… The truth is that quite a bit of these goods (mostly fuel) have been smuggled into the market with consequences not only for our revenue but also distorting our market and damaging competition.” His concern about smugglers and Afghan antitrust law would be more touching if there were a market there other than the black market and if anyone had ever heard about antitrust law in Afghanistan.

Of course it is about the money. But it’s probably a lot worse than that. It’s also about a game the Afghanis may be playing in their own minds.

The latest customs dispute comes at a time when Karzai is again picking a fight with his putative American allies. He’s saying America is trying to split Afghanistan to benefit the Taliban. That remark is of the sort we’ve heard from Karzai for years and written off as Karzai “going off his meds again,” to paraphrase former U.S. Ambassador to Afghanistan Karl Eikenberry.

Karzai, as erratic as he has been, isn’t making these claims to amuse himself. He can read a map, and he can read a calendar. In a year or less, American forces will have been withdrawn from Afghanistan. Unless a token force is left behind — which is increasingly unlikely given the Afghans intransigence on a Status of Forces Agreement that would exempt Americans from Afghan prosecution — Karzai will be thrown out of office and probably killed by the Taliban.

That’s where Karzai’s mind game with himself and his government, such as it is, comes into play. He may have deluded himself into believing that a power-sharing arrangement can be negotiated with the Taliban. He may believe that to the extent he gains some semblance of popularity — with a government whose writ extends almost nowhere outside Kabul — the Taliban may be willing to prop him up.

That, we know from the Taliban’s short history, is a hallucination. The Taliban are the worst sort of Islamic terrorists and their desire to share power with anyone doesn’t exist. If Karzai remains in Kabul after we leave, he will suffer the same fate as did Najibullah, the Soviet puppet who departed Kabul in 1992 and this life in 1996 escorted on both occasions by the Taliban. He was last seen dangling from a streetlight.

The only other explanation for Karzai’s statements and the new round of the customs duty dispute is that the Karzai gang is making final preparations to leave and take what wealth they can with them. Much has been written about how little of Afghanistan is actually governed by the Karzai regime and just about all of it is true.

From what we know, there is little that the government does or can do outside the capital city. It appoints regional governors and other officials, but with very few exceptions these people have no authority or ability to administer their areas of responsibility. The tribes that make up the vast majority of Afghanis accept the rule of the Taliban, not of Karzai.

The Taliban, as a result, retains almost all the trappings of government. It taxes people in towns and villages and forces many farmers to grow opium poppies. Through its councils, it administers its own brand of Islamic justice. The Taliban is by no means a beneficent ruler. But Afghanis accept it more than they accept Karzai and our efforts at nation-building.

For anyone who may still doubt that nation-building was the worst mistake we’ve made since 9/11, I can only repeat my recommendation of the many books written about this war by clear-minded individuals. The best is Bing West’s The Wrong War, and close behind it is Ahmed Rashid’s The Taliban. The former demonstrates conclusively the failure of nation-building and the latter proves why the nature and ideology of our enemy — and of the Afghan people — doomed this war to failure.

It matters not at all that Karzai will doom himself one way or the other. And in the long run, it makes little difference whether some of his officials escape to Switzerland with stolen American money. What makes all the difference in the world is that we’ve spent almost twelve years and more than 2,100 lives to throw out the Taliban and build Afghanistan.

In 2001 and 2002, a total of 82 coalition troops were killed in Afghanistan. The rest were killed since then in nation-building.

Colin Powell, advising George Bush on Iraq, is supposed to have told him that what he called the “Pottery Barn” rule applied: you break it, you bought it. In that, he was profoundly wrong. When we “break” a terrorist regime, our only strategy should be that we’ll be back to break it again whenever those people attack us again.

It’s time to leave Afghanistan to its fate with or without Karzai’s permission. Now, not later.