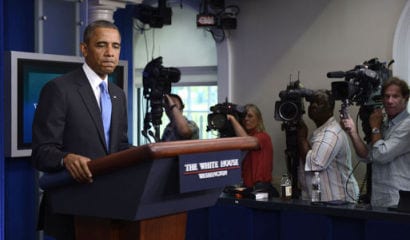 WASHINGTON — The reaction to President Barack Obama’s highly personal speech last Friday, ostensibly on race but actually on himself, has been surprisingly subdued. Some would have thought he was going to tone down the rhetoric. Instead his rhetoric was inflammatory. I think he caught the country off guard. The vast majority of Americans were going about their business, and then – whammo — the President was in the White House pressroom emoting. Still, over the weekend things were relatively quiet. Most Americans wanted it that way.

I suppose one reason for the country’s relative nonchalance was the country thought the President’s remarks were embarrassing, as though he had burped in public. He reminded us Friday that back in March of 2012 when Martin was killed he first inserted himself into the news story, saying that, “If I had a son, he’d look like Trayvon.” It was a tasteless remark then and it was tasteless when repeated Friday. Worse, he followed it up with a tasteless absurdity declaring: “Another way of saying that is Trayvon Martin could have been me 35 years ago.”

Thirty-five years ago Barack Obama was going by the name of Barry Obama. He was attending the posh Punahou School. He was on scholarship. I do not know about Punahou, but I do know about Hawaii. It is famous for its mixed blood population. Hawaii is truly cosmopolitan. Trayvon, in his tough-guy outfit and his slang, would be distinctly out of place there. Barry was not.

Barry was being raised in Hawaii by his white grandparents. It was as a child of privilege that Barry attended Punahou and before that he was living in Indonesia among that nation’s elite. Maybe one reason the President’s talk about race Friday sounded so embarrassing was that it was artificial, and besides Americans have heard it all before. They heard it from that poor little boy from Arkansas, Bill Clinton. Now they hear it from poor Barack Obama. Both attended elite schools, graduated from Ivy League schools, and entered the American establishment. My guess is that knowledgeable Americans know that Obama is a creature of his own imagination, aided and abetted by what might be called the Liberal Imagination. Clinton used his mythical upbringing for self-promotion. Obama is more egregious. He is inflaming racial animosities.

Almost nothing has been said by America’s black leaders about Trayvon Martin or his recently acquitted assailant, George Zimmerman, that is accurate or true. From Jesse Jackson on down it is almost as though they had developed some sort of mental block against both men. Yet there are people who have commented with sagacity, and, as a matter of fact, they are black.

From Bill Cosby, the entertainer and by now a common sense social critic, comes the observation that “you can’t prove” Zimmerman a racist. “You can’t prove,” Cosby says, “if somebody is a racist unless they really come out and do the act….” From Charles Barkley, the retired basketball player and occasional commentator, “I feel sorry that the young kid got killed, but they didn’t have enough evidence to charge him. Something clearly went wrong that night…but if you look at the case—and there was some racial profiling—something changed the dynamic that night.” Speaking on CNBC he concluded that Martin “flip[ped] the switch and started beating the hell out of Mr. Zimmerman.” Finally from Dr. Ben Carson, a distinguished neurosurgeon and now a promising columnist for the Washington Times, comes the definitive response to Obama’s comments last week. “Tone down the rhetoric,” says Carson, “and recognize that we the people are not each other’s enemies.

Those are the observations of men with good sense with an interest in a peaceful society.