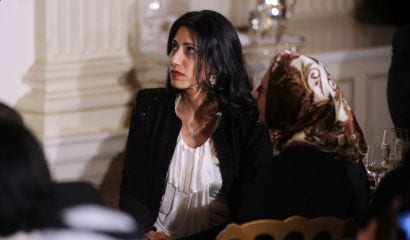 Every picture tells a story and if you ever visit R. Emmett Tyrrell Jr.’s office, you might notice a photo of The American Spectator‘s Editor-in-Chief grinning with a martini in his hand. There is a story behind that photo, which was taken in the lobby bar of D.C.’s fabulous Omni Shoreham Hotel, on the occasion of the publication of Bob’s 2007 book, The Clinton Crack-Up.

Tyrrell and The American Spectator had then only recently emerged from an extended period of troubles that began during the Clinton presidency, when the magazine’s investigation of the Lecher-in-Chief’s womanizing led rather directly to Clinton’s impeachment. The Spectator reported about a certain Arkansas woman named “Paula,” who later became the plaintiff in the Jones v. Clinton federal lawsuit, during the depositions for which suit the president perjured himself about his tawdry affair with a certain Miss Lewinsky. Anyone who doubts that Democrats are masters of the “politics of personal destruction” — to borrow a memorable Clintonian phrase — should ask Tyrrell about the orchestrated payback campaign against The American Spectator that ensued. The magazine was quite nearly destroyed and yet, by 2007, here was the scrappy editor still on his feet ready to do battle, with a new book published even as the former First Lady’s seemingly unstoppable 2008 presidential bandwagon was beginning to roll.

A remarkable story, and I was the guy assigned to tell that story in my job at the time as Culture page editor for the Washington Times. Among other things, my article referred to Tyrrell as a raconteur and a bon vivant — a charming sophisticate, famed for his sarcastic wit — and, thinking how best to illustrate this image, it was I who conceived the idea of having him pose for that photo with the martini. You see, I had in mind the scene at Hillary’s campaign headquarters when someone picked up the paper and saw that feature article: “Tyrrell? He’s still at it? With a new book? Didn’t we assign our goon squad to destroy this guy — bankrupt, discredit and neutralize him?” Just imagine Hillary looking at that picture of Tyrrell, visibly undestroyed, with his martini and mischievous grin as if toasting her: “Here’s mud in your eye!”

That was a fun article to write, and American Spectator readers need not wonder why Tyrrell’s journalistic accomplishments have seldom gotten the recognition they deserve. If he were a liberal, Tyrrell would be relentlessly applauded by the press corps which, as studies compiled by the Media Research Center show, reliably votes Democrat by landslide margins. Republicans are as rare in America’s newsrooms as on American university faculties. The New York Times is never going to do a warm human-interest story about R. Emmett Tyrrell Jr. for the same reason that mass-market women’s magazines — Cosmopolitan and so forth — never celebrate the remarkable careers of Phyllis Schlafly, Ann Coulter, or Michelle Malkin. Likewise, the media never mention Rush Limbaugh except to denounce him, despite the fact that his program is the most popular national radio show in modern history. The unrecognized greatness of such people is a byproduct of liberal bias, so pervasive in the media that most journalists never notice it for the same reason fish don’t notice water.

Consider a striking counter-example: Huma Abedin, a woman recently in the news because her husband Anthony Weiner has again been caught exchanging lurid messages with a girl less than half his age. A former assistant to Hillary Clinton, Abedin has for years been the subject of glowing media coverage and apparently nobody in the media ever bothered to ask the simple question, “Why?”

Dave Weigel finally asked that question Thursday in an article at Slate, and couldn’t find any good answer. “Before this week, she had a sterling reputation… based on… what, exactly?” Weigel wrote of Mrs. Weiner. “If you return to the early profiles that created Abedin’s image, they’re based on very little.” Abedin is a capable and intelligent woman, not bad to look at, but in this she differs not at all from many other capable, intelligent, nice-looking women who work in politics. Weigel pointed out, however, that the press has for years gone out of its way to praise Abedin as though she were more beautiful than Grace Kelly and more intelligent than Albert Einstein. An unsuspecting reader might have thought Huma spent her evenings as a fashion model and her weekends working to cure cancer.

The double standard is obvious. Can anyone think of any aide to a Republican politician, or any Republican politician’s wife, who ever received the kind of celebrity treatment that the media provided to Huma Abedin? And yet, until Weigel raised the question, it seem no one had ever thought twice about it. This is merely one example of the unexamined prejudices that compose the enormous edifice of one-sided journalism we call liberal media bias. Every day, there are questions that “mainstream” reporters (the scare-quotes denoting how liberals arrogate to themselves the authority to define “mainstream”) simply never ask.

For example, why did Weiner’s erstwhile cybersex mistress tell her tale to a gossip blog, TheDirty.com, and not to the New York Times? Furthermore, who tipped the liberal blog BuzzFeed to the name of this 23-year-old cybersexer, Sydney Leathers? Back in 2011, when Andrew Breitbart led the way in reporting Weiner’s first cybersex scandal, a taint of disrepute was attached to the story, simply because Breitbart was a conservative. All sorts of conspiracy theories floated around the original WeinerGate scandal. It was a hoax perpetrated by hackers, Weiner’s defenders claimed, and there was rampant speculation about shady shenanigans by secretive Republican operatives. Yet in WeinerGate II, as we might call this latest episode, nobody seems to care why the story developed the way it did. My suspicion that Sydney Leathers’ name was leaked by Team Weiner — “outing” her as an act of reprisal — isn’t something that the New York Times seems interested in investigating the way they explored various angles that seemed to cast shadows of suspicion over Breitbart’s reporting in 2011. If no liberal journalists suspect dirty tricks are involved in the latest Weiner scandal, it’s because any dirty tricks this time would seem to be the work of Democrats, and no one at the New York Times or any other “mainstream” news organization would ever dare so much as hint that Democrats are capable of dirty tricks.

Liberal bias is not a matter of unfairness, but rather a matter of dishonesty — deliberately ignoring some facts, and misrepresenting other facts, in order to misinform the public by portraying to them a politically falsified view of events and personalities. If there were ever any honest person employed by the  New York Times (we stipulate the hypothetical), that person would have been obligated to quit Thursday morning, when the banner headline on the front page of the paper should have been: “ANDREW BREITBART WAS RIGHT.” (An appropriate subhead might be, “Anthony Weiner Is a Typically Dishonest Democrat Dirtbag.”)

Cheating a great man out of his posthumous vindication is, however, just small change in the vast franchise of journalistic dishonesty of which the New York Times is the flagship enterprise. The fundamental falsehood of the whole Big Lie business is that Democrats are virtuous simply because they are Democrats, which is the only reason any fool ever could have thought a wretched human stain like Anthony Weiner worthy of admiration. A shrewd observer will notice an interesting aspect of how the media covers political scandals: When a Republican is caught in corruption or immorality, the individual’s disgrace is invariably depicted as reflecting poorly on the GOP as a whole. Yet when Democrats are caught in scandals, their wrongdoing is made to seem anomalous, in no way disgracing the party or its political agenda. In fact, the liberal glory of the Democrat Party adds nobility to its scandal-tainted members, so that Bill Clinton is still deemed praiseworthy — a beloved elder statesman — for no reason except being a Democrat. When the most reprehensibly loathsome Democrat dies, the dead politician is universally celebrated as a saint by the “mainstream” media, simply because he was a Democrat (and never mind that poor campaign aide who died in a submerged Oldsmobile).

Liars, cheats, and perverts are drawn to the Democrat Party for this very reason. Get elected to office with a “D” beside your name, and reporters won’t say a word about your notorious corruption or moral depravity. Anthony Weiner was always a despicable creep, but because he was a loudmouthed liberal, he was praised as a courageous hero by the media. When Weiner was driven out of Congress by his 2011 scandal, liberal journalists mourned R fall as a lamentable misfortune for a promising politician and, well, wasn’t it just awful for his brilliant and beautiful wife? So the media establishment then lent its enthusiastic assistance to Weiner’s rehabilitation and you could tell they were excited by the prospect of his election as mayor of New York — the courageous crusader’s comeback! Alas, it was revealed that this inspiring tale of redemption was just another liberal lie. Everyone pretended to be shocked that Weiner thought he could get away with doing the same thing he’d done before, but why should he have thought otherwise, when the media seemed so willing to believe whatever lies he told them?

Weiner is a mendacious pervert, and his wife was never as smart or as beautiful as the liberal press would have had us believe. This latest Democrat disgrace is as much as a scandal for Weiner’s media enablers as it is for Weiner himself. Just as the New York Times won’t admit that the late Andrew Breitbart has been vindicated nor recognize Bob Tyrrell’s achievements, neither will they confess their own lack of credibility. But you can never accuse liberals of having no standards, because they have exactly two: One for them, and one for everybody else.