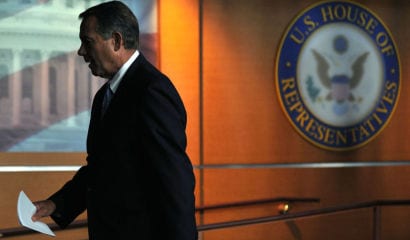 The headline writers were beset by hysteria last week at the prospect of another showdown between Congress and the White House on Obamacare, the budget ceiling, and a possible shutdown of the federal government.

The Hill published the headline, “Government shutdown looms over Obamacare.” Not to be out done, Politico proclaimed, “Fiscal Armageddon could remake Hill in 2014 elections.”

A shutdown is not out of the question. Sen. Mike Lee (R-UT) is leading an effort to block any spending measure that funds Obamacare, regardless of the danger of Republicans being blamed for shutting down the government. Some 64 Republicans have signed a letter to House Speaker John Boehner asking him not to bring any funding bill to the floor that includes Obamacare.

That letter, circulated by Rep. Mark Meadows (R-NC), doesn’t include a promise of the signers to vote against any such bill. Which deprives the letter of any significance. Mike Lee’s effort was praised by “moderates” such as Illinois’ Mark Kirk, who later withdrew his support. (John McCain is, of course, opposed to Lee’s move.)

That’s only one of the reasons it was really hard not to be cynical last Tuesday when Speaker Boehner said, “We’re not going to raise the debt ceiling without real cuts in spending. It’s as simple as that.” He also said that the right path for the House to follow was the so-called “Boehner rule,” which requires any debt limit hike to be offset by spending cuts in an equal amount. The problem with the “Boehner rule” is that it’s never been followed.

Time after time, the Republicans have been bullied into passing measures that have — again and again — increased the debt ceiling, raised taxes, increased the size of government, and hiked spending into the exoatmosphere. The Democrats — especially the president — will try the same thing this time. And there’s little reason to believe they won’t succeed.

One principal reason for this is Boehner’s fear of losing the speakership. He has two opportunities to do so: one if the Republicans lose the House (which he fears would result from a government shutdown); and another if Republicans mount a leadership challenge to him next year for failing to stand up to Obama.

We know what the Dem’s strategy is. There’s zero chance that Obama would sign any bill that defunds Obamacare. He’ll veto any such legislation and use every class warfare trope at his command to pressure the Republicans to back down on any threat to close the government.

We also know that the White House and the Dems in Congress are insistent on increasing spending. The Congressional Budget Office gave them ammunition to do so last week in a letter to Rep. Chris Van Hollen (D-MD) in which the CBO said that some 900,000 jobs would result in 2014 from greater spending than last year’s Budget Control Act allows.

This is a short-term strategy for the Dems. They’re still trying to deliver higher spending now — to buy votes — and effectively saying the hell with the future.

We know this because the Dems conveniently fail to mention that the CBO letter also says, “Although output would be greater and employment higher in the next few years if the spending reductions under current law would be reversed, that policy would lead to greater federal debt, which would eventually reduce the nation’s output and income below what would occur under current law.” Current law being the Budget Control Act, which the Dems want to bypass to buy votes in 2014.

The BCA, you will remember, is the law that imposed the sequestration of government spending that is now strangling the Defense Department, causing such niceties as the temporary grounding of about a dozen Air Force squadrons and delays in the refueling of aircraft carriers. It also exempted Social Security and Medicare from any cuts even though they alone are bankrupting the country.

And let’s not forget that for all its evils, the 2012 Budget Control Act — along with increases to the debt ceiling, “continuing resolutions” authorizing spending to avoid a government shutdown, and whatever other nonsense that’s happened since 2010 — was entered into by Boehner, Sen. Minority Leader Mitch McConnell, and the other Republican leaders in Congress open-eyed and apparently without remorse.

And each time the Republicans have collapsed like a cheap tent, they’ve been punished by Obama and the media. They’ve not gained popularity with minorities of any stripe. No praise has come their way. They’re the bad guys in all the scenes they’ve acted out for more than four years. It’s time they actually stuck to their guns and faced Obama down.

Obamacare is the issue to do this on for two reasons. First, its impact on the economy is entirely negative, which the Republicans need to shout from the rooftops. As Rush Limbaugh explained last week, the law sets full-time employment at 30 hours per week and mandates health insurance for all full-time employees. Which makes Americans worse layabouts than Frenchmen, unable — by law — to find work at more than 30 hours a week. Even the French work 35 hours a week.

How many of the CBO’s 900,000 jobs in the letter to Chris Van Hollen will be regular, 40 hour-a-week jobs? Probably zero because of Obamacare.

Republicans should — every hour of every day — blame Obama for the limitation on employment. It’s a lot harder for anyone to make a living if they’re only working less than 30 hours a week. That’s not rocket science: it’s what Joe Biden used to call a “kitchen table” issue. And it’s the kind of issue that created the Tea Party.

Republicans have apparently lost the ability to make a stand. When Boehner faces the president, he capitulates. When McConnell tries to stand up to Reid, McCain cuts the legs out from under him or other faux-conservatives do the same.

That’s a fact, not an assertion. And given that fact, Republicans — led by Lee, Meadows, or whomever — have to make a stand on their own.

We know that Boehner will be the focus of any Obama/Reid effort to threaten the Republicans. And we also know that conservatives in the House can only be pushed so far. Boehner’s “Plan B” — which was another cave in, that time on taxes — was scuttled by conservatives in December of last year.

If they could do it then, they can do it again now. Boehner isn’t a fool or a bad guy. But he is a “leader” who can and should be led by his peers.

At this point, given their sorry record, congressional Republicans should have to answer the question of why we elected them. It certainly wasn’t to cave in on the budget, the debt ceiling, taxes, Obamacare funding, and all the rest. Why did we elect people who are giving every indication that they’ll cave in on amnesty for illegal aliens this fall?

By now, we’re entirely justified in having forgotten what the reason was. It’s time the Republicans in the House and Senate reminded us.