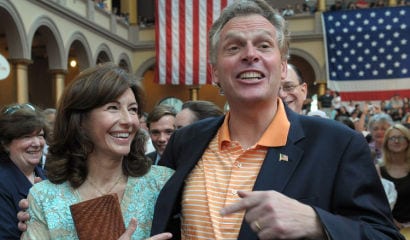 The Virginia governor’s race is well underway with Republican Attorney General, Ken Cuccinelli running against über Democratic fundraiser and former party chairman Terry McAuliffe. The Cook Political Report has called this campaign “the marquee race on the ballot nationally in November” and predicted “much will be read into the results as the 2014 cycle moves into high gear.”

While McAuliffe has been a highly visible figure in Democratic politics, having started out as a fundraiser in his early 20s for Jimmy Carter, he has never held public office. In order to get a better sense of the man, I violated my long-standing principle against reading books by politicians other than Winston Churchill, Daniel Patrick Moynihan, and, maybe, Jack Kemp and picked up McAuliffe’s autobiography, What A Party! My Life Among Democrats: Presidents, Candidates, Donors, Activists, Alligators, and Other Wild Animals (2007) written with Steve Kettmann. It may be more accurately described as self-hagiography with some interesting perspectives on the inner workings of money and politics. A book of ideas it is not.

Terry McAuliffe is of a branch of that irrepressible tribe of Irish-Catholics for whom the New Deal and the Democratic Party are paramount. While claiming to be a loyal Catholic, he is of the school which views all value, all meaning, and all that is good and true as emanating from the party of Jefferson and Jackson. I recall a Catholic pastor in St. Louis County telling me during a 1974 congressional campaign on which I was working that there was only one mortal sin left: Voting Republican. That comment gives you a sense of McAuliffe’s perspective on the world. As his recent parroting of the pro-abortion line in his campaign demonstrates, all things are subordinated to the well-being of the political party of his father, a World War II veteran who worked as a party official in Syracuse.

McAuliffe is a wealthy man, a fact which is evident in his autobiography but rarely discussed in terms of the source of his wealth. He demonstrated entrepreneurial skill as a teenager starting his own paving business back in New York. His ingenuity, ambition, and boundless energy, especially in political fundraising, are truly amazing. One lesson I drew from slogging through this mess of a book was that Republicans should not underestimate this man. Back in his early days, he showed up at a corporate CEO’s home to collect on a donation pledge as that poor, unsuspecting mark came out to get his morning paper before breakfast. He once wrestled an alligator to collect on a big donation from a tribal leader in Florida. He also ran a marathon, with only three hours sleep after a night on the town.

After being enlisted to chair a major fundraising benefit for Al Gore’s 2000 presidential campaign, McAuliffe set up shop at the headquarters of the Democratic National Committee and proceeded to make 200 calls a day, Monday through Friday, with three staffers working phones to get prospects lined up for him to make his pitch. Whether he was raising money for the Clintons’ political enterprises and the presidential library, or providing a $1.5 million loan to allow Hillary to buy a house and establish New York residency for her Senate campaign, our man was always at the ready. He could quit whatever he was doing and camp out in Los Angeles to rescue a busted Democratic convention, or resurrect a bankrupt DNC during his chairmanship. He managed these feats with a family of five kids and a lavish lifestyle.

Yet, there is hardly any mention of his business interests in What A Party. McAuliffe is almost completely opaque as to the nature of his financial empire, which appears to be immaculately conceived and independent of his loyal and successful service to the Democratic Party and its candidates.

Ken Cuccinelli is positioning himself “as the candidate looking out for the ‘little guy’ — and painting Terry McAuliffe as a Democratic version of Romney” (without the jobs), as reported by Politico.

“I don’t play golf with presidents,” says the Republican Cuccinelli, the sole support of seven kids on a government salary. “I don’t go hunting with kings and princes,” referring to McAuliffe’s relentless name-dropping including his wild boar hunting trip with Prince Andrew in Hungary and another for wild birds with King Juan Carlos of Spain whom he called “a terrific guy.”

McAuliffe reported adjusted gross income of $8.2 million for 2011 compared to $194,000 for Cuccinelli. It must be great fun for the Virginia Attorney General. He is also having fun with one of McAuliffe’s companies that located to Mississippi where his friend Haley Barbour served as governor. Good for Haley, but he is not running for governor of the Old Dominion.

Terry McAuliffe seems to have friendly relationships with GOP party leaders such as Barbour and Ed Gillespie, but he takes a Manichean, or black and white, view of most Republicans versus Democrats. Sure the Monica Lewinsky thing was a mistake, but Ronald Reagan actually delayed release of the hostages in Iran so he could win an election. Terry says so. He launches this libel citing only a retired national security staffer but doesn’t offer any direct quotation or note any published source of any kind. The only Democrats he really criticized in his book are the incompetents in the Kerry presidential campaign who did not consult with him and lost a close campaign leaving $15 million still in the bank on election day.

McAuliffe may have a harder time practicing his Pavlovian Democratic politics in Virginia given the inability to practice deficit spending there like they do in Washington. He claims to be fiscally responsible while supporting almost any kind of spending program to solve every problem under the sun. I hope somebody in the Cuccinelli campaign is keeping a running tally of Terry’s promises and putting dollar figures next to them. For his part, Cuccinelli is focusing on jobs and the economy with manic message discipline.

It is no accident, and truly ironic, that McAuliffe and the Virginia Democrats are attacking Ken Cuccinelli on an array of second tier social issues such as abortion, climate change, and gay marriage. In his autobiography, McAuliffe and Bill Clinton complained about the Republicans’ tactics in defeating John Kerry in 2004. They talked about “how successful the Republicans had been once again in using wedge issues against us. They inflamed their strong supporters with emotional talk of abortion and gay marriage and tried to paint us somehow not moral…”

That was then. This is now. Look for Terry McAuliffe to do whatever it takes to try and win the race for Governor of the Commonwealth of Virginia. He is, first and foremost, a party animal.