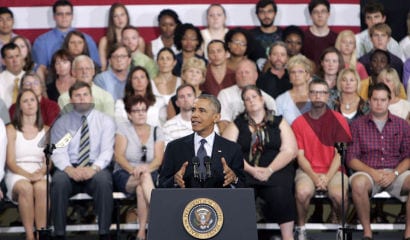 The past four years have proven that Barack Obama does not understand what “diversity” means, and while that might be an occupational hazard for anyone as emotionally invested in community organizing as this president continues to be, it’s also the kind of willful ignorance that explains why no course correction can be expected from his operatives, either.

Can you remember the last time you read about “green energy” creating jobs without an embarrassing undercurrent of federal subsidies to sustain them? When the Institute for Energy Research did the math, dividing federal expenditures in this area since 2009 by the number of permanent jobs created, it came up with the shocking cost of $11.45 million per green job. Any president willing to embrace prudent diversity in energy policy might wonder about that number, or look favorably on the Keystone XL Pipeline and the shale boom, but Barack Obama has done none of those things.

In fact, President Obama’s reflexive disdain for thinking that runs counter to his own is well-documented, and the flip side of the president’s oft-exercised scorn is his conviction that decent people ought to feel the way he does about any given policy. Ironically, the chief executive who has pledged more grandstanding allegiance to “diversity” than any other in U.S. history is also the man who has done the most to drain that noun of any cachet it once had.

Genuine regard for diversity would not dismiss legitimate criticism by lumping it with allegedly “phony” scandals. It would not chastise Catholic school administrators in Ireland (!) for being “divisive,” or invoke divine blessing on abortion-promoting organizations like Planned Parenthood. Is it any wonder why half-baked lectures on the U.S. Constitution delivered to indifferent students a lifetime ago are not enough to quell the suspicion that Barack Obama is more familiar with Saul Alinsky’s Rules for Radicals than with James Madison’s Federalist Papers?

Because it leaves no room for realism, this administration’s approach to all things Islamic is another example of diversity denied.

Victor Davis Hanson has written that for President Obama, “The past is a vague mess with shifting narratives that can serve noble contemporary causes.” Hanson’s assertion is vindicated by repeated nonsense from this president in annual Ramadan-themed remarks about Thomas Jefferson hosting the first Iftar dinner at the White House, and reading the Koran as though for edification rather than education.

The problem with President Obama’s soft-focus drivel is that while Thomas Jefferson will never be confused with a brawler like Andy Jackson, alleged appreciation for Islamic culture did not keep our third president from authorizing military action against Muslim pirates significant enough to be memorialized in the Marines’ Hymn. It was Jefferson who sent a few good men to the shores of Tripoli when ongoing extortion from the 19th century ruler of that Muslim capital had become intolerable. Jefferson was no crusader, but he had fewer illusions about Islamic influence than Obama does (headline from the Australian: “White House backed. release of Lockerbie bomber Abdel Baset al-Megrahi”). Poor Jefferson can’t catch a break from his successor, who recently claimed that the principal author of the Declaration of Independence inspired even Vietnamese dictator Ho Chi Minh.

Meanwhile, toadies for this administration blame sequester-driven budget cuts for limiting things like daycare at preschools on military bases and the number of public performances by the Blue Angels, while simultaneously hoping that no one fusses about Secretary of State John Kerry delivering $500 million to the Palestinian Authority. That cash might be cynically but appropriately viewed as bribe money for new talks with Israel, if the State Department were diverse enough to welcome the opinions of conservatives like former U.S. Ambassador John Bolton — which it isn’t.

Diversity in the Obama administration has gone the way of security for American diplomats in Libya. Inigo Montoya (“You keep using that word. I do not think it means what you think it means”) saw this development coming. And what difference, at this point, does it make?

What difference indeed? Apart from an occasional presence in Tea Party gatherings and a lasting contribution to the wondrous variety of vacation spots that have welcomed Air Force One since 2009, diversity is dead because President Obama deliberately flattened it with a progressive ideology more featureless and imposing than the extraterrestrial monolith in Stanley Kubrick’s 2001: A Space Odyssey.  “Conformity” is the new hotness. You can either welcome it, or suffer the tender mercies and “nudge policies” of the federal government’s young but enthusiastic “Behavioral Insights Team.”