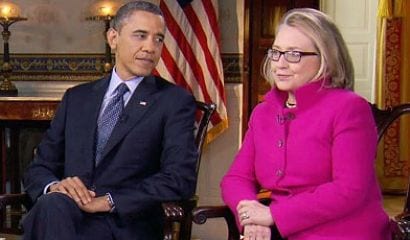 You can always tell the depth of an event’s illegality by the measures people take to cover it up. By that measure, the conduct of President Obama, Hillary Clinton, and David Petraeus leading up to the terrorist attack that killed four Americans on 9/11 2012 must be must be so sufficiently wrongful that, if revealed, they could lead to the president’s impeachment.

How else can we gauge what is apparently the most energetic coverup in modern history?  We know, from several sources, that the survivors of the attack — not on the consulate, but on the CIA annex — number a few dozen or more. We also know from those sources that almost all of their names have been concealed from Congress in the course of the coverup.

Those sources also reveal that the CIA has required those survivors to sign confidentiality agreements binding them to never disclose what they were doing in the days or months leading up to the 9/11-12 attack.  Keep in mind that good old Joe Wilson — the former ambassador sent to Niger by the CIA to “learn” what Iraq had done to acquire uranium — wasn’t required to sign any confidentiality agreement, hence his ability to become a Democratic political attack dog instantly after Deputy Secretary Richard Armitage leaked his wife’s CIA employment to reporter Robert Novak.

The Joe Wilson episode and the CIA requirement imposed on the Benghazi survivors is entirely consistent with the political conduct we’ve seen from the CIA in the past dozen years.

And it gets worse. Last week, Rep. Trey Gowdy (R-SC) disclosed that the CIA’s involvement in covering up the Benghazi scandal goes much further. He said that the CIA was not only requiring the Benghazi survivors to change their names, it is also spreading them around the country in a CIA version of a witness protection program. In this case, the witnesses are being protected from ever telling the truth to the media or testifying before Congress.

Why is there such blatant intimidation of these people? We’ve all seen and heard the reports that the Benghazi CIA annex was the locus of a gun-running operation. If it was, the only likely recipients of the arms would be either the Syrian opposition — which is largely made up of al-Qaeda members and other Sunni jihadis — or the Turks who might have been serving as a pipeline for the arms to those same Syrian opposition guys.

In either case, the president — whose approval had to have been obtained for any such operations — would be directly implicated. He was either acting without congressional authority or in violation of laws on the books that are supposed to block those actions.

Either way Obama, Clinton, and Petraeus would be in the dock personally for having broken the law.

It would be enough to make Haldeman, Erlichman, Mitchell, and Dean green with envy. Except for the fact that nobody died in Watergate. And the fact that the other facts of the day don’t just call into question Obama’s Middle East policy: these facts demonstrate that this policy is quite bizarre.

In the past two weeks, there have been massive jailbreaks of al Qaeda members — some of them high-ranking leaders — in Iraq and Libya. In Pakistan, hundreds of Taliban jihadis, again including some Taliban leadership, escaped. There are probably about a thousand al Qaeda and Taliban thugs at large today who weren’t at large last month.

So it should come as no surprise that the State Department issued a travel advisory on Friday and  ordered our embassies in most Muslim countries closed yesterday. Al Qaeda isn’t, as Obama has told us again and again, decimated or out of action. The specific information that led to the warning and closure of 22 embassies is of a widespread al Qaeda threat that could target Americans in any of those countries on President Obama’s birthday. This is his birthday gift from the people who brought us the “Arab Spring.”

The president continues to insist that there is some bloom of democracy in the Middle East. Both he and Eric Holder have admonished the Egyptian military to include the Muslim Brotherhood in any interim government they might form. This would be, Obama and Holder insist, a more “inclusive” government for Egypt.

They obviously believe that the Muslim Brotherhood — for all its ties to terrorism, for all its doctrine of strict Sharia law — is a force for democracy rather than against it. Either they believe that, or Obama and Holder have made America into a force against freedom and democracy. At this point, there is ample reason to believe either interpretation of American policy.

As this is being written, there are no reports of any terrorist attacks on American embassies in the Middle East. But that’s just today. What does not come today may come tomorrow or the next day.

What will not come tomorrow or the next day is a change in Obama’s mind and American policy. Actually, that policy is changing and for the worse.

According to Obama’s Pentagon toadie, Chuckie Hagel, we are soon to end our drone program in Pakistan. That has always been a thorn in the side of the Pakistani government, which itself is most famous for collaborating to hide Osama bin Laden for about six years in Abbottabad. Why we should care that Pakistan disapproves is, to say the least, counter-intuitive.

In the 2004 campaign, we scoffed at John Kerry’s proposal for a “terrorist overwatch” program in Afghanistan. Kerry said that we could stand off and strike when we needed to, killing terrorists at our leisure. That, of course, is too much for Obama.

He is much more concerned that the Benghazi coverup succeed than with the tiny issue of defeating al Qaeda and the rest of the Muslim terrorist groups. If the Republicans were courageous and wise, they’d establish the Benghazi select committee proposed by Rep. Frank Wolf (R-VA) soon after the attack.

Give it subpoena power, let it demand the testimony of the CIA’s Benghazi survivors, no matter what names they may now be living under. Grant them the power to immunize witnesses against criminal liability for prior acts. And then let the chips fall where they may.

But that would take courage, a part of which is the willingness to take political risk. Which, in the case of this House, is damned unlikely to do anything of the sort.