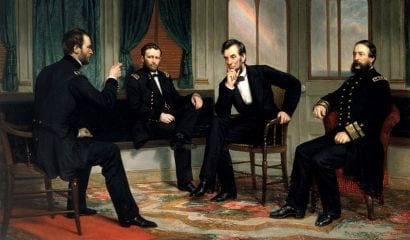 Last week, Karl Rove opined that a GOP attempt to defund Obamacare would be analogous to Pickett’s Charge at the Battle of Gettysburg. His analogy was trite as well as inaccurate, yet Gettysburg does contain a lesson for establishment Republicans who oppose defunding. Its moral lies not in Pickett’s disastrous charge, however, but in the failure of Union General George Meade to follow up his defensive Pennsylvania victory by attacking the Confederate forces as they withdrew to the safety of Virginia. Meade’s timidity extended the Civil War by two years and rendered his Commander-in-Chief nearly apoplectic with frustration.

Lincoln, who was quite familiar with the virtues of caution in its proper place, knew that General Meade’s excessive prudence had been far more disastrous than any aggressive tactic he could have pursued. As he wrote to Meade, “[The enemy] was within your easy grasp, and to have closed upon him would, in connection with our other late successes, have ended the war. As it is, the war will be prolonged indefinitely.” This, unfortunately, was not Lincoln’s first experience with over-cautious commanders. In fact, one of the greatest challenges he faced throughout that war was in locating a “fighting general.” Today’s conservatives face a similar problem.

Karl Rove is by no means the only establishment Republican urging excessive caution on the defunding issue. And, like Rove, many seem to have picked up the pusillanimous “Pickett’s Charge” meme. Oklahoma Republican Tom Cole used the same metaphor later in the week. Meanwhile, his fellow Oklahoman, Senator Tom Coburn said of Senators Ted Cruz, Mike Lee, and others who favor defunding: “They’re really rallying all the outside groups. They’re going to spend a bunch of money to just demoralize the base.” And one can’t leave out GOP Senator Richard Burr of North Carolina, who declared defunding “the dumbest idea I’ve ever heard.”

Sadly, there is no shortage of conservative pundits who also warn of dire consequences if congressional Republicans show the intestinal fortitude to actually defund Obamacare. Ramesh Ponnuru wrote last week that “Conservatives on Capitol Hill think they have a chance to strike a mortal blow against President Barack Obama’s health care overhaul this fall. If their plan goes forward, however, it will backfire.” Even the redoubtable Charles Krauthammer derides the defunding effort: “The GOP insurgents are threatening to shut down the government on Oct. 1 if the stopgap funding bill contains money for Obamacare. This is nuts.”

Krauthammer, Ponnuru, and the GOP’s nervous Nellies in Congress base their dire predictions on the widely held belief that the 1995 government shut-down during Bill Clinton’s presidency was an unmitigated disaster for the Republican Party. As Krauthammer puts it, “Every fiscal showdown has redounded against the Republicans. The first, in 1995, effectively marked the end of the Gingrich revolution.” However, as Jeffrey Lord pointed out in this space last week, that oft-repeated assertion simply doesn’t conform to the facts. In 1996, the Republican Party suffered modest and long-expected losses in the House and actually gained seats in the Senate.

So, if the electoral disaster caused by the 1995 government shut-down is a myth, what precisely is the problem? The answer lies in Senator Coburn’s characterization of Cruz and Lee’s actions: “They’re really rallying all the outside groups.” These “outside groups” are made up of people with deeply held conservative convictions, which include a profound distrust of big government and the status quo. In this, they differ with most Washington insiders, including most Republicans. Thus, people like Senators Cruz and Lee and those dreaded “outside groups” threaten to dislodge them from their cushy positions in the Beltway political and social structure.

As it happens, this is not unlike the situation facing Lincoln as the Civil War began in earnest. He was an outsider, considered to be little more than a country bumpkin by most of the Washington establishment, who inherited a peacetime army led by a group of senior officers long-inured to dining out on their service in the Mexican War. Many of these military officers considered him their social and intellectual inferior and at least one harbored political ambitions with which Lincoln’s program of preserving the union at all costs was likely to prove inconvenient. Indeed, more than a few favored some sort of compromise with the Confederacy.

Consequently, like today’s constitutional conservatives, Lincoln endured a long and frustrating search for a general who would take the fight to the enemy. In the end, after going through a long list of well-connected insiders, he finally landed on an outsider with little prestige and less political ambition. This was Ulysses Grant, whose two main virtues were a belief in the cause and a dogged refusal to lose battles. It is these two virtues that are so conspicuously absent from Washington’s Republican establishment. In the end, they don’t really believe in the cause — constitutional conservatism — and they are always willing to cave to the Democrats.

Thus, the Republican “leadership” tells us that Obamacare is a disease that has crippled the economy and will kill U.S. health care, yet denounces anyone who advocates the only remedy that has any chance of slowing its metastasis. These establishment drones must be replaced by people who truly believe in the cause, and conservatism has to find a “fighting general” somewhere in the wavering ranks of the GOP.