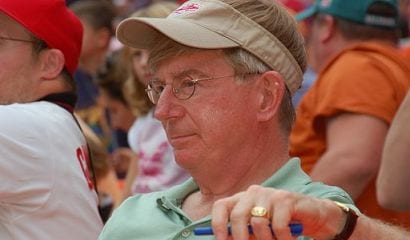 George Will is an opinion columnist and public intellectual whose reputation may very well surpass that of Walter Lippmann in the annals of American letters. His recent article on “Religion and the American Public,” published in the journal National Affairs, is an articulate, learned, and vibrant defense of religion in the life of American democracy coming from a person who claims to be “unchurched” and is, at best, an agnostic on matters religious. It is a remarkable essay, albeit one that raises as many questions.

“I approach the question of religion and American life from the vantage point of an expanding minority,” claims Will. “I am a member of a cohort that the Pew public-opinion surveys call the ‘nones.’ Today, when Americans are asked their religious affiliation, 20% — a large and growing portion — say ‘none.’”

While believing that “religion has been, and can still be, supremely important and helpful to the flourishing of our democracy… I do not think the idea of natural rights requires a religious foundation, or even that the founders uniformly thought it did. It is, however, indubitably the case that natural rights are especially firmly grounded when they are grounded in religious doctrine,” says George Will.

Despite Will’s profession of the “nones” faith, his formulation is consistent with that of the great American Jesuit political thinker, John Courtney Murray, whose classic, We Hold These Truths: Catholic Reflections on the American Proposition (1960) which I discussed at this site on the 50th anniversary of its publication. Murray sought to demonstrate an alignment of the Declaration of Independence and its recognition of inalienable rights, i.e., truths that are “self-evident,” with natural law theory.

“The doctrine of natural law has no Roman Catholic presuppositions,” wrote Murray. “It’s only presupposition is threefold: that man is intelligent; that reality is intelligible; and that reality, as grasped by intelligence, imposes on the will the obligation that it be obeyed in its demands for action or abstention.”

There are important distinctions to be made between natural law, natural right, and natural justice theories, but they do overlap at least on the matter of the self-evident truths of the Declaration. Will speaks in terms of natural rights and John Locke rather than Aristotle or Aquinas. Still, he agrees with William F. Buckley, Jr., who I once heard describe himself as “not a good Catholic but a loyal one.” Buckley told Will that “a real conservative need not be religious but could not be hostile to religion.” Thus, says Will, “Dogmatic atheists (and some dogmatic theists) might think such an attitude impossible, but our nation’s founders surely thought, and proved, otherwise.”

Will goes through the usual discussion of the Deism or Unitarianism of Jefferson, Adams, Madison, and Franklin but fails to note the overwhelming number of signers of the Declaration who were active believers in a more robust or biblical-based Christianity. He claims these four founders felt a civic duty to be “observant unbelievers,” which sounds a bit like hypocrisy as the tribute vice pays to virtue, to quote an old French aphorism. Two days after endorsing a “wall of separation” between church and state, Jefferson attended church services held in the chamber of the House of Representatives.

Will’s core argument is that “religion is central to the American polity precisely because religion is not central to American politics. That is, religion plays a large role in nurturing the virtue that republican government presupposes because of the modernity of America.”

“Our nation assigns to politics and public policy the secondary and subsidiary role of encouraging, or at least not stunting, the flourishing of the infrastructure of institutions that have the primary responsibility for nurturing the sociology of virtue,” says Will. “American religion therefore exists comfortably with, but is not itself a component of, American government.” Thus, a “fascinating paradox” manifests itself: “America, the first and most relentlessly modern nation, is — to the consternation of social scientists — also the most religious modern nation. One important reason for this is that we have disentangled religion from public institutions.”

Will does not comment on current battles, say, over the Obama administration’s HHS mandate or other incursions into the domain of civil society.

Will’s view of religion is primarily utilitarian. He sees it as one of many players on the Madisonian chessboard of factions offsetting one another and keeping the government from running roughshod over society, which is certainly true and has been for centuries. In fact, Murray points out that the Roman Empire could not even imagine such a thing as civil society. It was years of struggle between the Catholic Church and the Holy Roman Empire, along with subsequent events such as the Reformation, that cabined off the state from society and society from the state. Liberty was never an abstract principle on inevitable march to fruition. It was a product of history of which religion played a major part.

For the founders, says Will, natural rights were grounded in human nature and were considered “normative rather than a merely contingent fact. This view was buttressed by the teaching of Biblical religion that nature is not chaos but rather is the replacement of chaos by an order reflecting the mind and will of the Creator. The Creator is part of the American proposition and recognized in the Declaration as the one “who endows us with natural rights that are inevitable, inalienable, and universal — and hence the foundation of democratic equality. And these rights are the foundation of limited government — government defined by the limited goal of securing those rights so that individuals may flourish in their free and responsible exercise of those rights.”

George Will, like Alexis de Tocqueville for that matter, is to be commended, despite his agnosticism, for recognizing the importance of religious belief in the very foundations of the Republic and its ongoing struggle to protect human liberty in the face of an ever-growing and expansive government. But the question inevitably arises, can a purely rational or Madisonian system survive without a critical mass of authentic religious believers amongst the citizenry? Even the best constitutional framework may be insufficient, in and of itself, to maintain ordered liberty without something more substantial inhering in the body politic? To put it another way, what would America look like if everyone subscribed to Will’s agnosticism or atheism? It would probably look a lot like western Europe or Japan.

This is not to criticize George Will. Faith is a gift. The late Reverend Richard John Neuhaus, editor of the ecumenical journal First Things, writing in his posthumous book American Babylon: Notes of a Christian Exile, asked, “Can an Atheist Be a Good Citizen?” Neuhaus distinguished between those who are “without God” per the Greek, a-theos, i.e., those intellectually honest people, like Will, who simply cannot prove or come to apprehend the existence of the Deity, and the “new atheists, who exult in publicly assaulting the religiously grounded foundations and aspirations” of the American political order. Will clearly represents the former category of non-believer.

George Will’s article in National Affairs was adapted from a lecture he delivered at the John C. Danforth Center on Religion and Politics at Washington University in St. Louis. I recall watching the question-and-answer session on C-SPAN when he was asked how he reconciled his current state of unbelief with his professed admiration for religious belief. He stated, simply, that he could not.