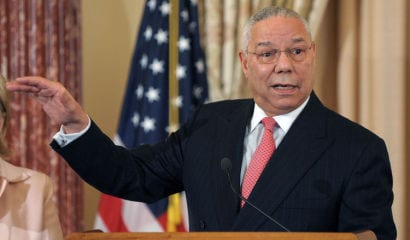 Coverage of Colin Powell’s exposed e-affair with Romanian diplomat and politician Corina Cretu has been noticeably light. The same newspapers that treat Powell as a figure of impeccable moral authority have made sure to ignore it. Since Powell is pro-abortion, pro-gay marriage, and a general nuisance to conservative Republicans, he enjoys an immunity from the usual frenzied coverage that follows such revelations.

Powell did, however, have to suspend his victory lap last week to issue a dubious statement about the hacked e-mails. He acknowledged that he has known Cretu for about a decade — since his globe-trotting days as secretary of state under George W. Bush — and that over “time the emails became of a very personal nature, but did not result in an affair. Those type of emails ended a few years ago. There was no affair then and there is not one now.” He conceded that she had sent him some “bathing suit photos” of herself but “never anything improper.”

Reading the e-mails, one might wonder what language the cyber-affair was conducted in. “Sip aglass of wine with me, as youused to tell me -advising me to lie neck [naked] on tha sofa.. Iamsorry,weare completely deplorable as we don’t assume what we had together,” wrote Cretu to Powell in one e-mail.

The exchanges weren’t exactly Byronic. Yet Powell says the affair was strictly epistolary. Apparently he enjoyed the nuances of her prose.

This didn’t stop him from saying in 2005, “You and the weather could make that happen,” in response to her come-to-Romania-again overtures.

If the affair was just epistolary, she took it all very seriously, writing to him that “I did not believe that at 43 I can cry more for a man like a teenager,” that he was the “love of my life,” and “Have you such a heart to leave me here alone, [thinking] of you, without enjoying your gifts… your small gestures or gifts, which once was very powerful, without your words every day?”

This differs markedly from Powell’s description of the relationship as “electronic.” Powell apparently tried to break things off eventually but couldn’t quite do it, as the New York Post pointed out: “Colin Powell just couldn’t give his flirty Romanian pal the heave-ho, despite her numerous needy rants at the bitter end of their racy relationship, the pair’s hacked e-mail exchanges show. Instead, the married Powell, 76, continued to keep the line open throughout 2010 and 2011, as European Parliament member Corina Cretu, 46, whined in her e-mails about their past cyber-flirtations — and scolded him for being slow and icy in his replies.”

According to the Post, which has the story largely to itself, Cretu (at least so far) “did not deny she had an affair with the former secretary of state.” She was clearly very cross with him by the end, writing in a 2011 e-mail: “Even a nice good night I don’t deserve in your view? And until which point you would like to see me destryed completely? Is not fair, Colin, and you are not fair.”

The Post says that Powell’s diplomatic skills failed him. Cutting her off clumsily, she shot back in one e-mail, “I am especially sorry that you see me as a threaten for you or somebody dangerous from which you must stay away. Nobody is saying to go to bed, I just want to see you, nothing more.”

If Powell’s diplomatic skills were rusty, so too were his political ones. Among the other hacked e-mails is one from Powell to Cretu asking her to delete all their exchanges: “The hacker gets addresses from my contact list which he got when he hacked into President Bush’s account. Our security people have been chasing him for months. He may have lots of your emails, maybe not, so best to delete all between us.”

Thanks to a corrupt media that protects sanctimonious liberal frauds, Powell will no doubt gut it all out and reemerge as a towering figure of probity after a prudent interval. He will pop up on the Sunday talk shows to lament the failings of Republicans and shepherd the nation towards its next high moral peak, maybe polygamy or open marriage.