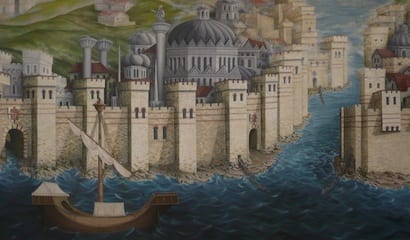 LONG BEFORE THERE was the Big Apple, there was the Red Apple. Constantinople, the “Second Rome” capital of the Byzantine Empire, was the richest, most splendid city in the world for most of the millennium between its establishment by the Emperor Constantine and its fall to the Ottoman Turks led by Sultan Mehmed the Conqueror in 1453. As Philip Mansel explains in his masterful Constantinople: City of the World’s Desire, 1453-1924, “The Turkish metaphor for worldly dominion was the Red Apple,” and the Red Apple was believed to be the globe held in the right hand of a giant statue of the Emperor Justinian in front of the great church of the Holy Wisdom (Haghia Sophia) in Constantinople.

In the popular imagination, the city itself—ideally situated to govern a vast empire radiating out into the Balkans, Eastern Europe, the Peloponnesus, the Crimea, Asia, Arabia, and North Africa—became the Red Apple. And in the glory years of the Ottoman Empire, which peaked during the reign of Suleiman the Magnificent (1520-1566), it was a far larger, wealthier, more powerful metropolis than the Rome, Paris, London, or Vienna of its day. Ironically, during most of its years as capital of the mightiest Islamic empire in the world, Muslims and ethnic Turks were a minority in the city, outnumbered by  Greek, Armenian, and other Christian subject peoples who, along with Jewish refugees fleeing persecution in Spain and Italy, dominated Ottoman commercial life and learned professions such as medicine and architecture.

This, and the growing diplomatic presence of the great European powers as the Ottoman Empire declined in the 18th and 19th centuries, led to the emergence of a city-within-the-city, a Little Europe just across the Golden Horn from old Constantinople in quarters that had once been a self-governing colony of pre-conquest Genoan merchants. Palatial European embassies sprang up in what came to be known as Pera (nowadays Beyoglu), along with Catholic, Protestant, and Orthodox churches, the mansions of wealthy Levantine merchants, and, in the 1890s, when deluxe rail travel on the Orient Express made Constantinople easily accessible to wealthy tourists, some of the greatest luxury hotels of the era.

The legendary Tokatlian Hotel, where Kemal Ataturk spent many a night in the bar and on the dance floor in the early days of the Republic—and where my paternal grandfather occasionally stayed in the days before World War I—is now a museum. But the stately Pera Palace, built in 1892 and still going strong after a major renovation, remains the most prestigious traditional hotel in modern Istanbul, as Constantinople is now known. Even thrifty tourists who can’t afford to stay there still splurge for a drink or two in the Pera Palace’s opulent Grand Orient Bar, where Agatha Christie, Greta Garbo, and many another celebrity guest downed a few, or more than a few, in celebrated days gone by.

And then there is the Büyük Londra Oteli, or Grand Hotel de Londres as the large brass plaque outside this small, faded, but still charming hostelry proudly identifies it. Built in the same year as the Pera Palace, but—despite its name—on a considerably less grand scale, the Büyük Londra (54 rooms and 12 suites) has a threadbare, slightly louche charm all its own. To me it represents an endearing mix of Belle Epoque opulence, the setting for a noirish espionage novel by Eric Ambler or Graham Greene, and a kinder, gentler Turkish version of Fawlty Towers.

In warm weather months, there is a cozy Terrace restaurant and bar on the roof with a splendid panoramic view of the domes and minarets of the old Istanbul skyline on the other side of the Golden Horn. It speaks well for the food and ambience that it is popular with locals as well as tourists and hotel guests. But it is the high-ceilinged, dingy-elegant Edwardian bar, just to the left of the hotel’s still-impressive grand staircase—often used as a backdrop by television and film producers shooting period dramas—that is my favorite spot.

Istanbul, and Beyoglu in particular, has hundreds of great bars, taverns, and cocktail lounges. A prime example of the top-end market is the pricily elegant, shiny new Pera Marmara hotel next to the Pera Palace and just a short stroll down from the Büyük Londra’s little spot on fashionable Mesrutiyet Caddesi. Nearby is a thriving selection of pubs, clubs, restaurants, and dives on and around Istiklal Caddesi, the former Grand Rue de Pera and still a major shopping, dining, and drinking area. There are also a number of good meyhane (literally “drink houses”). The Turkish equivalent of a good neighborhood bar and grill, they were described to me by one Stambouli with limited English—but perhaps more truth than he knew—as “alcoholic restaurants.”

My favorite Beyoglu meyhane is the Cumhurriyet (the Turkish word for “republic”), a staunchly secular, bibulous stronghold in the best tradition of Kemal Ataturk, whose face stares down from more than one framed patriotic print on the smoke-encrusted walls. Most evenings there is live, traditional Turkish music and lots of cigarette smoke, despite the current Islamist ban on public smoking. The list of meze small plates is both long and appetizing; my favorites include excellent midye dolma (mussels stuffed with rice, onion, currants, pine nuts, and spices), pastirma (highly-seasoned, dried beef with a definite attitude), and hamsi (a particularly succulent Black Sea variety of anchovy)…all washed down with plenty of Yeni Raki, one of the better brands of the high-octane, anisette-flavored spirit that has been the beverage of choice for serious Turkish drinkers through the centuries. It is nicknamed Lion’s Milk, both for its potency and because when poured over ice or served with a little cold water, it turns a milky white. For the fainter of heart—and weaker of liver—there is always Efes beer, a perfectly adequate Turkish pilsner that is just as good as, and considerably cheaper than, trendy European imports.

Other stops may follow, but I always make a point of getting back to the Büyük Londres bar in time for at least a nightcap before retiring to my room. Even when there are only one or two other guests, the conversation can be lively thanks to the fluent English and ready good humor of Ilkan the barman, who bears an uncanny resemblance to Fox News’ Chris Wallace. Even more eloquent than Ilkan, however, is Yakup, the bar’s resident parrot. Yakup has a large, irreverent vocabulary, whistles at pretty girls, and only talks to people he likes.

I was fortunate enough to fall into that category and look forward to speaking with him and exchanging birdcalls again on my next visit. Given the Erdogan government’s authoritarian tendencies and intolerance for robust free speech, I just hope Yakup won’t have traded his pleasant perch in the Büyük Londra bar for a jail cell.

That’s where more than one outspoken Turk I know of has ended up.