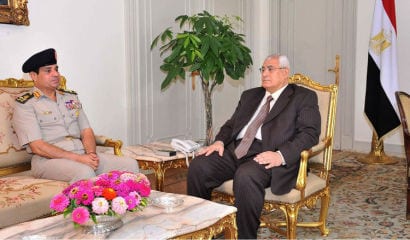 The problems in Egypt are not about to end soon, and if the last sixty years are any indication it will take a long-term intervention by its military forces to return and maintain civil peace to the nation. To perceive Egypt as divided into civilian and military components is false. From an economic standpoint alone it must be accepted that the military and civilian sectors of national life are quite integrated.

In hard numbers it has been calculated that some 10 to 40 percent of corporate ownership is held by military or military-connected instruments and/or individuals. How strictly one interprets “ownership” accounts for the disparity in the figures. In fact, military “involvement” probably affects close to half of the national economy. It has grown over the decades and no matter how it is calculated it is deeply imbedded in the mechanism of Egypt’s national life.

This integration is not merely a matter of finances; it is a societal integration on several levels. Over the many years since Col. Gamal Abdel Nasser and his military clique, originally titled the Society of Free Officers, altered the historical colonial-dominated, quasi-monarchial framework of Egypt, the extended military “family” has grown exponentially. Military-derived academic scholarships have proliferated for students in all forms of science, technology, and even business management.

A 2008 classified cable from U.S. Ambassador Margaret Scobey released by Wikileaks made note of “the military’s strong influence in Egypt’s economy… particularly active in the water, olive oil, cement, construction, hotel and gasoline industries.” What the cable did not comment on was that retired generals have an important role in all these and other industries. And this is to say nothing of the armed forces’ business involvement in all aspects of military products, manufacture, and supply.

The political philosophical root of the Egyptian military today is encapsulated in a quotation from Nasser in 1953 calling for the establishment of what he termed the new “Liberation Rally.” Nasser said this movement – managed by the military – “is not a political party and never was intended to be. The creation was prompted by a desire to establish a body that would organize the people’s forces and overhaul the social set up.” (As cited in Keith Wheelock’s Nasser’s New Egypt, 1960.) Nasser is then quoted as saying this would school the people in “how to elect their representatives properly.” If this seems to resonate of the fascistic pre-WWII governments of Italy and Spain, it would not be incorrect. However, a more pertinent and accurate comparison can be made with the secular revolution led by the military of Mustapha Kemal Ataturk of Turkey. Placed in the context of the movement in today’s Egypt for Islamist theocratic dominance, a similar anti-theocratic equation arises from similar motivating factors.

In brief, the objective of today’s Egyptian military command is just the same as when Nasser enunciated it sixty years ago. Mubarak’s military rivals said he was too fascinated with his own ambition of placing his family interests ahead of the original and now traditional guidance as set forth by Nasser and his Free Officer comrades. Interestingly, the Free Officers were challenged early on by the Muslim Brotherhood even though they had a shared ambition of overthrowing the Farouk government.

Known in earlier times as Muslim Brethren (an alternative translation of the Arabic), the Brotherhood had a strong following among Cairo youth. These have now become the elders of today’s Muslim Brotherhood , or at least its mentors. However, what is important in considering today’s relationship of the Egyptian military vis-à-vis the Muslim Brotherhood is that from the beginning each of these key elements of Egyptian society considered the other its “natural opponent.” It’s become a basic law of political existence to be either committed either to the secular ideals of the original revolution set in motion by Nasser and his coterie of young officers or to the Muslim Brotherhood’s perception of the rightful domination of Islamic law and the political implications flowing out of that.

Following a Nasserite maneuver to proscribe Muslim Brotherhood activities, the Supreme Commander of the Armed Forces, Colonel General Abdel Fatah al Sisi, has for all intents challenged the Brotherhood to defer to all aspects of the military’s ultimate dominance – and hand-picked government – or the religious organization will be banned from all political activity as it had been previously. The mistake the leadership of the Muslim Brotherhood made was to forget that the Egyptian military was established and constituted to be the guiding instrument of the modern Egyptian republic and its governance — and believes it is such today.

Gamal Abdel Nasser made very clear for all who followed him what the structure of the new Egypt should be. A New York Times columnist quoted Col. Nasser in 1954: “Egypt needs social and economic strengthening by authoritarian methods and political purge…before a democratic constitution.” Today’s analysts in and out of the government should take note of this six decade-old directive. Egypt’s contemporary leadership certainly is doing so.

For the United States to refuse to continue financial support of Egypt is to ignore the realpolitik of the region as well as the Muslim Brotherhood’s lack of condemnation of, and in fact covert support for, the worldwide threat of radical Islam. The enemy of our enemy….