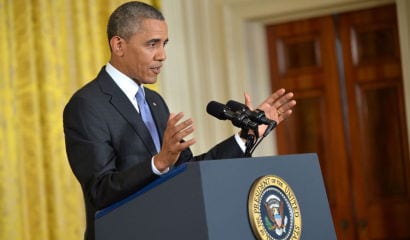 Nidal Hasan — the Fort Hood mass murderer now on trial — began his court martial defense with the statement that the evidence will show he is guilty. What the evidence will also show, by omission, is how our government institutions ignored the sort of evidence the NSA is supposedly looking for in its global search of telephone data, emails, and other electronic communication.

In his Friday press conference, President Obama didn’t address that problem. Instead, he promised to have an independent panel of experts report on how to fix our intelligence gathering mechanisms. He began, as he always does, by disclaiming responsibility for any problems. He expressed a “healthy skepticism” about the NSA programs when he was a senator, dontcha know. He thus invoked, for the umpteenth time, the “I wasn’t there, I didn’t do it, it was those other guys” defense Eric Holder invented in the Marc Rich pardon mess.

Obama then went on to propose that somebody, someday, “reform” Section 215 of the Patriot Act to limit NSA’s reach into telephone records. (It isn’t Section 215 of the PATRIOT Act, of course. It’s Section 501 of the Foreign Intelligence Surveillance Act, which Section 215 rewrote.) Obama didn’t say what those reforms should be or even outline a general proposal. Just “reform,” whatever that means.

Obama also wants to have the Foreign Intelligence Surveillance Court hear two sides of every search warrant application it hears. Other courts don’t have adversarial proceedings on search warrants, but Obama wants FISC to have them. The problem is that to have a real adversarial proceeding, you need to have someone other than the government — even some sort of governmental guardian ad litem of the people’s Fourth Amendment rights — presenting the adversary’s case on the warrant application.

All of the “reforms” Obama proposed should be of no comfort to anyone concerned that the NSA or other intelligence agencies are listening where they shouldn’t or reading what isn’t meant for their eyes. What Obama proposed is that our intelligence gathering on terrorist activities continue as it has for the past dozen years with a smiley face sticker on them and some additional bureaucracy cluttering up the landscape.

There’s a lot wrong with this picture. We know, for example, that the FISC has authorized collection of telephone “metadata” on all 120 million of Verizon’s telephone customers. But we know that the answer to this apparent overreach isn’t to make our intelligence gathering less effective. The answer is to make congressional oversight of NSA, and the Supreme Court’s oversight of FISC’s actions, more effective and make public the evidence that this is so.

The other solution is to adopt the metaphysical philosophy contained in the three words that appear on the front of every claymore mine: Front Toward Enemy.

That, in the intelligence context, means that Americans aren’t the problem. Yes, for every Nidal Hasan there are millions of Americans who aren’t Muslim jihadis eager to shout “Allah Akbar” while shooting their fellow Americans.

The problem isn’t us: it’s those other guys. And the problem lies not with us, but with them and those governmental illusionists who insist that what Hasan did wasn’t terrorism but “workplace violence.”

Some of us, including myself, believe that 99.9% of our antiterrorist intelligence gathering should be aimed at those Islamists in foreign nations who pose the proximate danger of terrorist acts against us. And we believe that it already is.  But that position is harder and harder to defend when all we have is Gen. Alexander’s word that NSA has stopped dozens of possible attacks. We don’t disbelieve him, but we lack the information to support him if, as we expect, his statements are true. He can’t make the specifics public, we expect, because to do so would probably reveal too much of our methods and sources of intelligence gathering.

In Obama’s Friday presser, he recognized that it isn’t enough for him to have confidence in these intelligence gathering programs, the American people have to share that confidence. But none of the “reforms” he proposed will engender it.

That’s because those reforms aren’t directed at the problems people perceive with the programs and because the administration sounds like the sleazy car salesman in the old Isuzu commercial who smiled and said, “trust me.” It’s impossible to believe the message when the messenger is someone who has already lied to you repeatedly.

Whether or not the president is serious about reforming Section 501 of FISA — and that is always in doubt — Congress has to come to its own conclusions about what should be done.  None of this is going to be easy, but all of it needs to be done.

Let’s start at the end and work our way back to the beginning. As I’ve written, not only do we need better oversight of NSA and the other intel agencies, but we need the Senate and House intelligence committees to take it upon themselves to tell us a lot more about what their oversight efforts are accomplishing. If they’re satisfied that NSA isn’t abusing its authority, why are they? What have they concluded that we can gain understanding from and, from that understanding, achieve some confidence in the intelligence agencies’ work?

When we see the FISC granting orders allowing the gathering of data on 120 million Americans, it’s impossible to believe the court is doing its job.  How is it requiring the government to pare down its requests for access to information? That’s only one of many questions the chief judge of the FISC should be answering publicly, if necessary at the direction of the Supreme Court, which has administrative responsibilities for all U.S. federal courts.

Last and largest among the problems is the fact that our intelligence community was horsed around with after 9/11 to its detriment. It was reorganized twice, shuffled around (does anybody believe that the Homeland Security Department should be analyzing or disseminating intelligence? If you do, go to the back of the class), and otherwise made a bureaucratic muddle.

Way back when the Director of National Intelligence was being created, long before it proved to be a useless bureaucratic appendage to intelligence gathering, I wrote that establishing the DNI was the wrong approach. What I wrote then and will repeat now, is that there needs to be legislation that will force upon our intelligence agencies the same kind of culture of cooperation that reformed our military and made it the most effective force on earth (at least until 2009).

That culture was created by the Goldwater-Nichols Act of 1986. It forced the military to cooperate in joint efforts across the board. “Jointness” — an awkward word even by Pentagon standards — unifies the armed services so that we no longer have instances where the Marines can’t talk to the Air Force because their radios can’t get the same frequencies.

The whole intelligence community is still divided into individual fiefdoms that sometimes cooperate and too often don’t. Enacting a Goldwater-Nichols reform of the intel community (and doing away with the DNI in favor of a Director of Central Intelligence who would actually direct a centralized intelligence agency) is the answer.

Tinkering with one section of FISA isn’t going to solve these problems. Whether it even needs to be done is something we can’t conclude without a whole lot more information than we have now. Members of Congress who are asked to vote on FISA changes will — and should — demand to have that information about NSA’s actions, the FISC’s oversight, and what the intelligence committees are doing.

Obama was right on one thing Friday. The NSA leaks made by Edward Snowden haven’t given us a basis for a good debate on intelligence gathering. They’ve only served to inflame rhetoric without giving anyone proof that anything has been done illegally or unconstitutionally.

It’s time for the congressional intelligence committees to start doing their job. We need more tough oversight, more information about how that’s being done, and a very serious Goldwater-Nichols oriented effort to reform the intelligence community. With that, we can have confidence in what’s going on. Without it, we can’t.