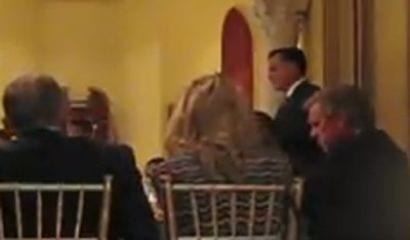 Dan Balz’s Collision 2012 relives a mighty fight for the presidency including the most pivotal moment of the campaign, Mitt Romney’s infamous 47% comments. Balz captures well the angst of the Romney campaign as it kicked into damage control after the tape of these comments went public. What the book ignores, however, and what has been largely ignored by the media, are the actual truths in Romney’s mangled remarks that evening.

Romney was recorded at the $50,000 per plate Boca Raton dinner saying that 47% of Americans “pay no income tax… are dependent on the government… and will vote for [Obama] no matter what.”

But the bit of Romney’s remarks that crossed a line was his charge that 47% of Americans believe “they are victims” and “should take personal responsibility… for their lives,” effectively disparaging a vast swath of Americans who receive entitlements or assistance. This is the part that got the media’s attention and sent the campaign scrambling. He was roundly criticized by both Democrats and Republicans, and his words likely altered the outcome of the election.

When the tape was revealed, we knew immediately that his message was not his intent, and we hurt for him and for the broader cause of the campaign because it was so out of character for him. Mitt is a man known for much. But, to those close to him, he is especially known for the respect he shows all human beings regardless of their circumstance. At the convention in August 2012, attempting to neutralize the character attacks by the Obama campaign, we showcased his little known but remarkable displays of humanity and private generosity, away from cameras and credit.

While we knew that he did not actually believe that 47% of our nation view themselves as victims, we also knew, immediately, the opposition would use his words to great effect because they so perfectly supported the Obama campaign’s false yet carefully crafted image of the Governor as a callous and mean-spirited plutocrat.

So what explains the remarks?

As much as the media and liberal elite would like to think that his comments revealed some dark inner bias, the simple explanation is this: in the evening exhaustion of a presidential campaign, he conflated many of his frequent stump themes which, when served up in the same paragraph, were just plain inappropriate. Having been at scores of public and private events and privy to most of the campaign’s policies and talking points, I witnessed how he evoked, often, the important themes articulated at that dinner that, when strung together in the same paragraph, produced such a bungled result.

For example, virtually every day, Romney would remind the faithful at rallies to stay vigilant since the undecided vote was uniquely small for a modern presidential election — about 5-6% — implying that he and President Obama each had a built-in 47% floor of support. In other words, yes, there was a wall of about 47% that both campaigns perceived as insurmountable at the time of the recording. This hypothesis was supported by virtually every pollster and political strategist.

Separately, he often articulated, correctly, how 47% of Americans pay no income tax (and usually added the clarification, absent in Boca, that many in this group do pay other taxes such as payroll and Social Security). Organizations as diverse as Heritage Foundation and the Tax Policy Center have confirmed this reality.

He also spoke of the virtues of a simpler time when personal responsibility seemed to have more of a place of primacy in the priorities of Americans, and victimhood was less often a cause célèbre.

And he correctly warned of the dramatic rise of dependency upon the federal government. As revealed in the Census of 2011, more than 47% of all Americans now depend on an entitlement or receive assistance from a range of programs such as Food Stamps, Social Security, Medicare, Medicaid, disability or housing assistance.

Most importantly, though, he never — as he appeared to do that fateful evening — attempted to use the rise of dependency as an avenue to demean or impugn the dependent. Instead, the always data-driven Mitt Romney liked to highlight the arithmetic impossibility of sustaining ever-expanding roles of dependents with ever-diminishing roles of taxpayers. His aim was always to point out that the comfort and safety of the former require the vibrancy and growth of the latter.

But politics being a blood sport, the Governor’s slip was exploited by the Obama campaign and the perception of Romney as insensitive and out of touch was further cemented in the minds of voters.

In interviews following the dust-up, Romney suggested that his intent that evening, “ineloquently” delivered, was to clarify that he had little chance of winning the majority of the 47% who, either partially or totally, rely on the largess of the government. Since voting is private, we will never know if his forecast was accurate, but evidence suggests he may have been correct. Though Romney won a slim majority of seniors and veterans, he surely lost the majority of the vote of those who avail themselves of all other major entitlements since the registration for these voter pools leans overwhelmingly Democrat. For example, among recipients of public housing, 81% are registered Democrats; for food stamp and Medicaid recipients, 67% and 74%, respectively, are Democrats.

I suggest even the most partisan Democrat ask themselves the following: Is it really credible to believe that Mitt Romney thinks a retiree collecting Social Security after a life of honest toil views himself as a victim for accepting the entitlement? Or that a quadriplegic veteran on disability insurance should accept more personal responsibility for his situation?

The answer, except perhaps to the prime-time hosts at MSNBC, is obvious.

As much as his critics would like the history books to show otherwise, Romney’s evening in Boca Raton and its aftermath were revealing of nothing more than a human being making an inevitable mistake in the over-scheduled maelstrom of a modern-day presidential campaign.