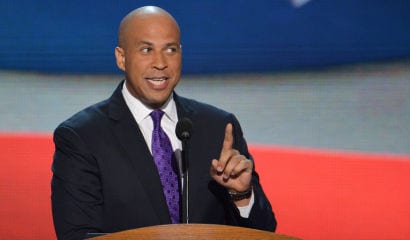 In old school New Jersey Democratic politics, the general rule of thumb was you don’t cut the line, you play by the (union) rules and eventually, maybe, you will be rewarded with higher office. Unfortunately for Democratic contenders Rep. Frank Pallone and Rep. Rush Holt, the rules of the game have changed.

The ubiquitous Cory Booker clobbered both candidates in the Democratic special election primary for Sen. Frank Lautenberg’s open Senate seat. To get a sense of how lopsided this race was, see the preliminary results in Essex county. Unofficially, in Essex, Booker received 66% of the vote. State House Speaker Sheila Oliver got 10%. U.S. Rep. Frank Pallone got 18%, and U.S. Rep. Rush Holt got 6%.

Booker, who counts Facebook CEO Mark Zuckerberg, Oprah and President Bill Clinton as friends, is a constant media presence and utilizes Twitter to an extent unheard of for a pol. He clearly learned from President Obama’s 2008 campaign that it is possible to seize a moment and generate a truly unlikely outcome. No longer do politicians need to bide their time, but by becoming a media darling these new generation politicos can up-jump their predecessors and reach new heights sooner. This media candidate was able to handily defeat the more experienced and richer Pallone as well as the more academic and experienced Holt. Those two must be pining for the days when washed up pols decided these things in back rooms, not on Facebook.

In New Jersey, it’s hard to imagine an Obama-come-lately losing any type of election. The resemblance is uncanny in some ways. In his victory speech, Booker had the following to say:

“This is Newark, New Jersey, and we don’t do naïve, the power of the people is greater than the people in power. The people united can never be divided. American history is a glorious testimony to people coming together… In Newark, we know it’s not naïve to come together to get things done.”

Booker, much like the president in 2008, has done a masterful job of branding himself. His public persona and online presence allow the media and many younger voters to do a bit of wish projection. They want to tell a tale of a public figure that transcends politics and crosses partisan divides. Booker is very representative of the progressive’s new guard. He relies on narrative more than policy positions. In the same victory speech quote above, Booker went on to affirm his traditional progressive values. He came out in support of social security, medicare, abortion rights and marriage equality enforced at the federal level.

According to his critics, as the layers of the onion are peeled away, much of Booker’s rhetoric does not match his results. His much ballyhooed tech startup, Waywire, made him rich but beyond that seems to be a complete dud. His economic record in Newark is also quite mixed.

“When Booker took office, 20 years of Sharpe James and his cronies running the city had unemployment at an unacceptably elevated 8.5 percent; after seven years of Cory Booker, it now stands at 14.4 percent.  The number of unemployed Newarkers jumped over that period from 8,892 to 15,744 – a shocking 77% increase.”

Crime has also risen under his watch. In 2010 he laid off 167 police officers and violent crime has seen a 24% increase between 2009 and 2012. Even some Democrats have begun to tire of Booker’s persona as many have un-endorsed him in the lead-up to the special election this past Tuesday.

On the other side of the aisle stands Steve Lonegan. After easily dispatching Dr. Alieta Eck, Lonegan delivered a message of hope to his supporters in Secaucus.

“In no uncertain terms … we’re going to deliver the first Republican senator in New Jersey in 42 years,” Lonegan exclaimed.

The former Bogota, New Jersey mayor also represents a departure from the past of New Jersey Republican politics. Lonegan worked for Americans for Prosperity and has been a consistent conservative in the Tea Party mold. New Jersey is much more used to conservatives like Christine Todd Whitman who could not have been more of a squish.  Lonegan’s victory means a true conservative will be running for Senate and represents a chance for a Republican not named Chris Christie to have some State-wide success in New Jersey. Lonegan, however, is not without his own campaign foibles. His campaign stepped in it on Twitter releasing a map that some in the media called “racially insensitive.“

Gov. Christie represents one of the true unknowns in this race. Christie considers Cory Booker a friend and the two of them worked together to prosecute corrupt New Jersey politicians years ago. Christie is not afraid of bad optics as seen by his cozying with President Obama in the wake of Hurricane Sandy. Christie could also be wary of going to bat for Lonegan since he is most likely going to lose. At the same time, Christie has to at least appear conciliatory to Republicans since he’s done such a great job making many of them angry. His course of action could have huge implications for the outcome of this race. It would not be a shock to see only tepid support from the Governor with national aspirations.

At present, the election looks like a daunting task for Lonegan. Early polls suggest a 30-point advantage for Booker. It will be up to New Jersey voters to decide which non-traditional candidate appeals more to them. On one hand, stands the young upstart who tweeted, texted and Facebooked his way to success. On the other, a small business owner that believes in limited government, but has not run the perfect campaign.

Both offer departures from their respective political party pasts in New Jersey. That’s not entirely a bad thing. Lonegan brings real conservative credibility unlike the RINOs of the past and Booker is not a criminal like so many of his Democrat forbearers. Booker’s predecessor was Sharpe James who only recently was released from prison. Perhaps it is too early to declare Booker innocent as recent reports regarding payments from his former law firm while he was in office. But we shouldn’t be too hard on him, it’s tough to escape New Jersey politics untainted. The recent gaps in Booker’s armor make it entirely possible that Booker could come into the Senate wounded by a tough fight and weakened by a Democratic establishment that is already tired of his act. That might be the best case scenario for conservatives.