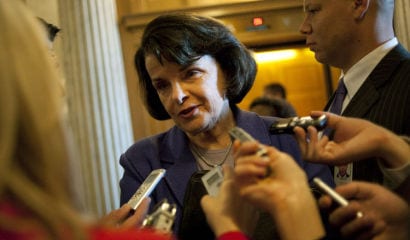 Senator Dianne Feinstein has had a busy year. She kicked off 2013 by leading the charge against “assault weapons,” analogous  to Nerf guns with extra plastic glued on. When the California Democrat’s gun control amendment decisively failed, she turned to defending extra-judicial targeted killing of American citizens with drone aircraft. Then Edward Snowden pushed intelligence officials into the spotlight without their usual kabuki stage makeup.

Right on cue, the self-styled “chairman” of the intelligence committee threw herself into tireless apologetics. The NSA’s indiscriminate collection of telephone metadata is of dubious utility and faces dubious oversight from the hamstrung Foreign Intelligence Surveillance Court. Yet Feinstein, a senior member of the judiciary committee as well, insists the agency does nothing illegal. They have nothing to hide, so please stop asking what they are hiding. Now, after taking shots at the Second, Fourth, and Fifth Amendments, she has set her sights on the First. When it comes to the Bill of Rights, never say Di.

A notable act of White House damage control this spring was the championing of a journalist shield law President Obama previously opposed. It would purportedly strengthen American press freedom, protecting journalists from being forced to disclose confidential sources by subpoena or court order. A common thread running through the Obama’s scandals is suppression of dissent. The current administration brags about prosecuting six leakers under the 1917 Espionage Act, twice as many as all previous administrations combined. Adams, Wilson, FDR, and Nixon had their own methods, to be sure, but President Obama’s crackdown puts him in such company.

Incredibly, the last few weeks have seen debate over whether reporting on the NSA is treason. How easily we forget the First Amendment’s unique robustness. When the Guardian acquired the Wikileaks documents, its editors contacted the New York Times to circumvent draconian British press regulations. In late June those same editors told Charlie Rose the U.S. government had raised no specific national security concerns about its NSA disclosures. Someone is lying, and of the two sides, the government has a much worse track record.

Feinstein would only protect the anonymous sources of what she would call “real journalists,” those being paid by an “established news organization.” The law would still have had direct bearing on the James Rosen case, and that of homophonic New York Times reporter James Risen. But Feinstein would exclude bloggers, an entirely arbitrary, meritless distinction. Until very recently, FiveThirtyEight was “just a blog” and Nate Silver was “just a blogger.” Glenn Greenwald is a lawyer by training who took up blogging almost as a hobby, but built himself into a Guardian columnist and now one of the paper’s stars, responsible for building its international brand.

As Feinstein would tell it, a few years ago Silver and Greenwald were not “real journalists.” Were they not just as talented? Their platforms were smaller, but were their professional goals and seriousness fundamentally different? Greenwald’s NSA reporting is the archetypical example. Edward Snowden sought him out after following his work. The enigmatic hacker also initially approached the august Washington Post and filmmaker Laura Poitras, who no longer feels comfortable entering the United States after facing rough treatment at the border numerous times.

Snowden is an anomaly, notably for expressing a willingness to forfeit his future as a free man. In the wake of the AP phone scandal, it was widely reported that government sources were clamming up. To be clear, the protection of confidential sources is not a settled issue. This specific debate is about whether anyone who disseminates information from a confidential source should be protected under the First Amendment from revealing that source. People holding power have no qualms about covering up their misdeeds. Almost a dozen scandals in the past few months bear that out. So did the Church Commission that scrutinized government abuses in the wake of Watergate. It would be a grave error to allow political leaders to decide who is a journalist and what journalism is.

That capability at any time could be turned around on the American people and no American would have any privacy left, such is the capability to monitor everything: telephone conversations, telegrams, it doesn’t matter. There would be no place to hide. [An autocrat] could enable it to impose total tyranny, and there would be no way to fight back.

Flash forward from 1975 to 2013 and Edward Snowden professes the same fear if nothing changes:

A new leader will be elected, they’ll flip the switch, say that because of the crisis, because of the dangers that we face in the world — some new and unpredicted threat — we need more authority, we need more power. And there will be nothing the people can do at that point to oppose it and it will be turnkey tyranny.

I generally avoid open-air polemics because I love reporting, believe it is crucially important, and do not want to alienate potential sources or readers. However, Dianne Feinstein poses an existential threat to my vocation, finding facts that tell stories. About a month ago I was approached by a former federal employee alleging unsecure data practices at a government agency. This was just after Snowden came forward, and my contact was utterly terrified of losing her anonymity and being imprisoned. I do not have the resources to independently verify her claims, but am still coaxing her to take the story to an outlet with the knowledge and resources to see it through. I worry how she will react to this debate.

Power corrupts, and absolute power corrupts absolutely. This is no platitude. I have seen it with my own eyes, heard with my own ears intelligence officials lie in congressional hearings, sometimes to complicit lawmakers. Dianne Feinstein tops that list in the Senate. Her disparagement of the First Amendment is difficult to fathom. If she gets her wish, we will all be worse off for it, necessarily less certain about the future of liberty.