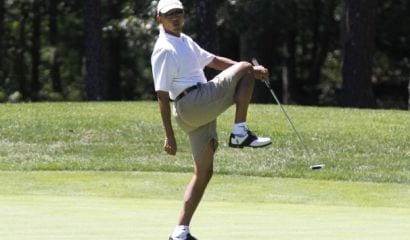 We interrupt our regularly scheduled permanent vacation to announce our resumption of hostilities. Look, we wanted to be nice, irenic, civil, compassionate, kindly, patient, but he wouldn’t let us, as if outraged that we weren’t hounding him every week. In a normal political environment we’d happily have done so. In our last entry, almost three years ago exactly, in the wake of the annual White House Ramadan dinner, we thought we’d struck an appropriate bipartisan tone. But then suddenly, late morning Thursday, he really did go too far.

He interrupted his vacation to appear on national television to denounce the Egyptian coup-government’s brutal suppression of Muslim Brotherhood protesters. All fine and understandable, except for one thing. We couldn’t actually see him speak. Dividing our watching as we do between CNN and Fox News, we were only allowed to hear his voice, coming at us Big Brother style, against a TV screen showing clips of the violence in Cairo. So why weren’t we being shown his face? Was he wearing a mask? Had he just come off the beach, perhaps one of those famed Martha’s Vineyard nudist spots? Or better yet, did he come off the golf course, in which case he would have been wearing those weird shorts that make him look as if he were a regular on the LPGA tour?

Later we did see photos of him, tieless but fully dressed, at a hastily arranged podium. But if it wasn’t that way on television while we were “watching,” was it real? Had he changed his garb in the middle of his remarks? Clearly his athleticism is not restricted to his political skills. Yet we did find it curious that he didn’t blame the violence in Cairo on some newly discovered video. Bet when it surfaces it will show our president in his Solyndra golf cart, on his way to another bogie.

We’re lucky to have him. Treasure these moments. Thank our lucky stars. Fortune will never smile on us like this again. Surely he’s preferable to his anointed successorette, the first woman this and that, and don’t you dare think she’s not a shoo-in in 2016. Say what you will, but no one expects to see her on the LPGA tour. True, she’s currently the only thing that stands between us and a Biden presidency, and we can’t have that. Like our president, we can’t remember Mrs. Biden’s first name either, even though she’d be the first “Dr.” to have an office in the White House since Dr. Kissinger served our nation during the Nixon glory. If we’ve overlooked Dr. Rice, sorry.

Not that we didn’t find it eerie to see the president and his former secretary of state sitting down to a friendly Rose Garden lunch the other week. Whose idea was that? Cui bono? Who approached whom? Did each come armed with a taster? Were drinks served? Was the heavier drinker carded? Who was her designated driver?

Washington continues to reel from the sale of the Washington Post to someone other than Robert Redford and Bob Woodward. Life goes on, but it cannot imitate art. Indeed, who needs art if you’ve got their way of life. Just a day before the Post’s chairman announced the sale, the Sunday New York Times ran a big splashy profile of the Washington Post’s publisher, who is the niece of the beloved chairman. He was quoted in the piece, as was she; indeed, she also seemingly cooperated with the Times, which said she was “taking charge,” and the whole thing came off as a really nice, lovely story, an example of two rival papers respecting the heck out of one another.

Except as it turned out, the lead was not only buried, but never interred, let alone dug up. The story and its principals betrayed not a hint about what was about to come down. Everyone in the Western world was misled. Did the Washington Post, by withholding evidence from the New York Times and devoted readers, engage in the very sort of cover-up that had put it on the map? The Watergate defendants are rolling over in their graves, slapping their thighs, having the time of their afterlives. Who says what goes around doesn’t come around?

And the Times? At last report it was exposing liberal corruption of the highest order, whether as practiced by the Senate’s next darling or the first woman president of the United States and her handlers. Perhaps the Times is angry. Perhaps it knows it’s too late to make any difference, so endemic is the rot it’s suddenly noticing. The important thing is that the Enemy Central is back. Send us your Enemy of the Week nominations. And next time we’ll name names.