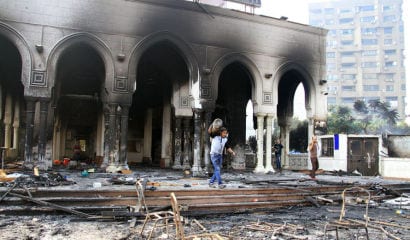 Egypt’s military controls about 40-50% of the nation’s economy. It runs dozens of companies that provide everything — as the Egyptian saying goes — from sewing needles to rockets. And, as you would expect, it is entirely corrupt. Gen. Abdel al-Sisi doesn’t just command the Egyptian forces: he’s sitting atop a gold mine which exists to keep his forces in the businesses they run, and national defense is only an ancillary effort.

Neither the military nor the Morsi government was capable of managing the economy. Accelerating the fighting are food shortages now commonplace around the nation. The Muslim Brotherhood will try to blame the military for that and use those shortages to incite violence.

In simplest terms, the Egyptian conflict is like a battle between the Corleones and the Barzinis, only without the talented actors. Al-Sisi’s “family” has to protect his corrupt economic interests against the Muslim Brotherhood’s encroachment. They’ve “gone to the mattresses” as they said in The Godfather, prepared for a long war. The only element missing is for the military godfather, al-Sisi, to say “it’s only business.”

On the other side, of course, is the Muslim Brotherhood about which little need be said other than the fact that it is allied with every sort of terrorist you find on the Sunni side of the Muslim terrorist street. They are Muslim supremacists.

This is a battle between minor league kleptocrats and jihadists who want to replace the kleptocrats’ economy with one that cannot possibly succeed. Because it lacks oil, Egypt’s economy would fail quickly under the MB. Islamic law will preclude its economy from having any success in a world that permits free-market capitalism.

In the middle of this conflict, President Obama announced a policy that is, in blunt terms, directly opposed to American interests. The only reason that policy doesn’t earn the label “anti-American” is that Obama didn’t directly blame America for Egypt’s situation.

What the White House did say, some weeks ago, is that the Egyptian military should allow the Muslim Brotherhood into any interim government it forms in the interest of “inclusiveness.” Set aside, for the moment, the fact that foreign policy pronouncements that don’t come from the president are supposed to come from the Secretary of State. John Kerry, quite evidently, isn’t taken seriously even in the White House.

Nevertheless, Obama has it entirely wrong for one simple reason. No matter how you parse Islamic law, any Islamic supremacists — be it an individual or a group like the Muslim Brotherhood — cannot coexist with democracy.

As I and many others have written, Islamic law is inconsistent with democracy to the point that it precludes it. To state the obvious, when you cannot separate church and state — which, under Islamic law you cannot — religious liberty is impossible and, necessarily, so is democracy.

So to suggest, as Obama did, that the Egyptians should include the Brotherhood in a government for the purpose of encouraging democracy is worse than risible: it’s down right bizarre.

And that’s the point that Obama is missing. If he’s half as smart as the media think he is, his statement that Egyptians should include the MB in any government cannot be a mistake. So his point is that all democracies are created equal. But if we have any knowledge of the world, it’s all to obvious that they are not.

If you look southward, you immediately run into the phenomenon of “continuismo.” This is the quaint South American doctrine in which dictators — the late Hugo Chavez being an example — remain in office past their elected term and impose their own brand of tin pot totalitarianism.

If you look eastward, you see nations such as Iran in which “elections” are held to choose only among candidates who are approved by the ayatollahs. These elections mimic the old Soviet-style election in which Russians and their satellite state slaves could vote for whomever the Party approved.

There are too many other examples to recount here. The plain fact is that if a “democracy” doesn’t allow political freedom or religious freedom or freedom of speech — come to think of it, if it doesn’t allow all the freedoms preserved by our Bill of Rights — it’s not a democracy.

Let’s be precise and unabashed. America sets a standard that, if a nation doesn’t meet it, that nation cannot claim to have a democracy. It’s not “as we define democracy” or “as we might say” or any such Bowdlerization of the concept. Either a nation preserves those “certain inalienable rights” for its citizens, or it cannot claim to be free or a democracy. Under that standard, there are damned few nations that measure up.

Egypt is in no danger of having a democracy regardless of which side prevails in the military vs. MB fight. The choice — in which few Egyptians will have a voice — is between a military dictatorship and a Muslim supremacist government allied with every Sunni-based terror group.

At this point, it appears that the Corleones are defeating the Barzinis, in the same manner that Michael murdered his competitors in the penultimate scene in The Godfather. Despite the “reprisals” the MB is committing against innocent minorities, the military is inflicting enormous blows on the Brotherhood. The hundreds killed in the seizure of Cairo mosques put a crimp in the MB’s style, and as this is written another day of violent protests and equally violent action to suppress them is under way.

The arrest of its top leaders — including the brother of al-Qaida #2 Ayman al-Zawahiri — does the same. The military may, this week, outlaw the Muslim Brotherhood, driving it back down into the shadows in which it existed for decades.

All of which should be welcomed by our government at least tacitly. Gen. al-Sisi will never be a real ally but — as Egypt’s neighboring nations recognize — his military could be a better agent of stability than the MB ever would be. Which is why nations all over the Middle East — Kuwait, Qatar, Saudi Arabia, and others — are reportedly supporting the Egyptian military with money and arms. They are filling the vacuum left by America’s abandoned influence.

By taking positions such as demanding that an “inclusive” government contain the Muslim Brotherhood, Obama has once again willfully abandoned our ability to influence events. He’s even reportedly tried to negotiate between the military and the MB and been rejected. The MB demands nothing short of restoration of the Morsi government, which the military rejects out of hand.

The Egyptian military, because of its economic interests, is a better bet for us. It’s more likely to maintain Egypt’s peace treaty with Israel. It’s less likely to tolerate other terrorist groups, at least those that would interfere with the military’s corrupt influence on the economy. But that’s no reason for us to be standing in line to give the military regime financial or military aid.

Given our lack of influence in the region, it’d be best for Obama to keep his nose out of Egypt and let the military see if it can suppress the Muslim Brotherhood for another few decades. If we try to do anything else, the only certainty is that Obama will get it entirely wrong.