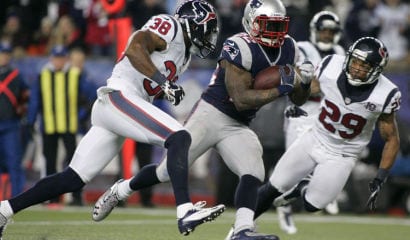 It’s the best time of the year. Footballs are in the air, Russell Wilson’s Seahawks manhandled Peyton Manning’s Broncos last Saturday night in an incredibly hard-played game — supposedly a meaningless preseason exhibition — and the promise of more such games to come over the next four or five months surely raised America’s pulse to healthier levels.

On Saturday as well the Wall Street Journal featured a lengthy piece by Max Boot, “In Defense of Football,” and it seemed a lot more defensive in tone than if Boot had been writing a defense, say, of our intervention in Afghanistan. For instance, he noted but didn’t challenge the specific claim that football-related chronic traumatic encephalopathy (CTE) was a contributing factor in the recent suicides of five former NFL stars.

Luckily, I spent the weekend perusing Dan Flynn’s must read The War on Football — which is officially being published today — and already knew from Flynn that there was a lot more to the sad suicides of Junior Seau & Co. than the sensationalist coverage they had received. Just as I knew from Flynn that there’s a whole lot more going on in the ongoing efforts to bring football to its knees. If it weren’t that our culture has become a gun-free zone, he’d be shooting fish in a barrel.

As he puts it in his Introduction about the topics he will knock down, point by point:

Anyone within shouting distance from a television might absorb by osmosis that football increases a man’s susceptibility to suicide; that its bruised and bulky players die decades earlier than their non-playing counterparts; that recalcitrant rule makers stubbornly refuse to adapt yesterday’s game to today; that it results in more catastrophic head injuries than any other youthful recreation; that NFL retirees find themselves broke and broken-hearted after the cheers subside; that football solons have only recently wrapped their brains around brain injuries; and that bigger, faster, strong competitors make the game deadlier than ever.

Not a bit of this conventional wisdom is true, not even the parts endorsed by George Will, who for reasons best known to the baseball side of his brain, actually wrote, “For all [NFL] players who play five or more years, life expectancy is less than 60; for linemen it is much less.” In fact, reports Flynn, “NFL players live longer than American males outside of football and suffer from various life-threatening ailments at lower rates.” As it happens, ex-major leaguers have a higher mortality rate than former NFL players.

Frank Bruni, a New York Times columnist who made his name as a reporter, ignored new evidence to repeat the “the NFL sixfold suicide canard” in a effort to paint football fans as “morally compromised.”

There we have it. Liberal crusaders always assume moral superiority, and in a squeamish age football’s manly requirements are a favorite target. And they always end up giving cover to those who readily enough turn the crusade into a racket. Take the case of Mark Lovell, whose operations Flynn meticulously takes apart in five concise pages. Lovell, head of a sports medicine concussion program, became the “go-to guy” for testing of athletes after concussion symptoms had ended. Only he and his program’s test seemed to have a handle on otherwise hard to discover symptoms. Except his writing never mentioned his financial stake in the testing and more often than not made its scholarly claims merely by referring to his team’s earlier writing. All in the name of claiming an authority on the subject of sports concussions, which remains a murky field at best.

Then we have the ex-players themselves, or alleged ex-players, some 4,000 of whom have joined in a huge suit against the NFL itself, a suit that reeks of a class action effort to cash in against a well-endowed corporation. It has its humorous side, as we see in Flynn’s portrayal of one of the plaintiffs, Al Williams — who played all of three games in the NFL, as a replacement player during the 1987 strike! And he’s hardly the only one. Flynn’s chapter on this scam is appropriately titled, “Show Me the Money!”

Who emerges here as a man of honor? Deion Sanders! “The game is a safe game,” he said before the last Super Bowl. “The equipment is better. I don’t buy all these guys coming back with these concussions. I’m not buying all of that….” And then he added something very dear to Flynn’s heart: “I wish they’d be honest and tell the truth, because it’s keeping kids away from our game.”

One reason why Flynn loves football is that it does take him back to his own childhood and efforts at Pop Warner play. But he’s also concerned with “The Abolition of Boys” (Chapter 8) and the disappearance of a habitat in which boys could be boys and their amazing energy and restlessness put to good playful and educational use. Flynn also keeps a close eye on high school football in his Boston area and some remarkable young men. I can’t recall when last I was reminded of the role football practice plays in the game. No other team sport requires as much — and thus provides such release on game day, and desolation on defeat in big games. Defeat is not another term for we’re all winners!

Flynn also reminds us that American football is a young game, and that many of today’s controversies are nothing compared to its early decades. We meet Walter Camp, who invented and codified much of the modern game and kept Yale a real powerhouse, Charles Eliot, the Harvard president who wanted to get rid of the “evil” sport above all on moral grounds, and Bill Reid, the brilliant young Harvard coach who with Teddy Roosevelt’s help outfoxed Eliot and Camp alike in modernizing football further — only to consider himself a failure when he couldn’t beat Yale in the big game.

And what about Knute Rockne’s Notre Dame? “The Fighting Irish bet on games, fielded professionals to play as amateurs, waived eligibility requirements for older tramp athletes, and employed hometown officiating.” Which was typical enough for its day. So what about the famous Gipper scene? “It shows life as viewers want it to have been rather than how it actually was.” Aren’t today’s football haters doing something similar, except in reverse?