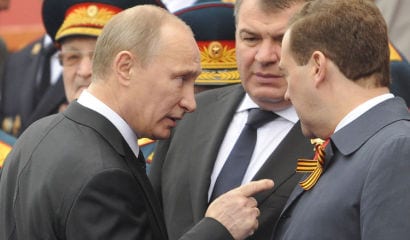 Vladimir Putin has a big problem and it has nothing to do with Syria, Iran, missile defense or even completing the Olympic facilities on time. He has been insulted personally and publicly by the president of the United States. According to President Obama at his press conference of August 9, Putin’s “body language” suggests “He’s like the bored kid in the back of the room.” The words were bad enough, but the superior tone used by Barack Obama was the most damning.

Aside from brief commentary on these remarks by the American media, and several clever remarks by late night comedians, a consistent effort was made by the U.S. press to avoid the issue of the insult. One can be sure that President Obama’s remarks were not overlooked or underemphasized by President Putin’s advisors. Not unexpectedly, though, there was no official or unofficial response from the Kremlin. It is highly doubtful, however, that Vladimir Putin, who long has been known for his physical and verbal combativeness, intends to allow this matter to go without a counter blow.

It’s rather obvious that the Russian president’s top counselors, such as P.M. Dmitri Medvedev and Foreign Minister Sergei Lavrov, after a useful “cooling off” period, will advise their boss to ignore the entire matter; that the supercilious remark by a self-important American president is not worth a response. Nonetheless, they know some thought has to be put into just what can be done, what might be said.

The Chinese may be the champions in this type of personal warfare, but the Russians of Soviet Union experience are adequately masterful. One would expect that Putin will be advised that there certainly will be something in Obama’s background of undergraduate narcotics use while living on New York’s West Side or his heavily subsidized, though secretly guarded, life at Harvard Law School that can be exposed with effect. At least that would be a starting point for this “opposition research.”

Of course the Kremlin brain trust is well aware this area already has been well covered to no avail by past political opponents of the Kenyan American — as Moscow researchers will call him. What is going to happen is that a couple of very bright SVR analysts will be assigned to accumulate all existing evidence of Barack Obama’s personal and political missteps. This material will be studied carefully to find any new and exploitable areas. President Obama has already complained over Russia’s proclivity to operate in a Cold War mode. Now he will learn what really experienced professionals in personal psychological warfare can do. At least those are the guidelines that will be passed down to the SVR team.

The big problem the varsity squad of character assassination will have will not be the lack of traceable sins of the past; those already have been dug up and dug out years ago. The American president’s well-developed narcissism has provided a plethora of negative observations since he began campaigning for office before 2008. Hillary Clinton’s mash squad was already on top of Barack Obama’s failings early on. None of it seemed to have bothered him — at least not for very long. Nothing seems to bother Obama personally other than being ignored. His three-putting a 15-footer on the Martha’s Vineyard golf course was the most embarrassment he has shown recently.

Putin’s researchers will find that Obama doesn’t spend much thought on other people’s shortfalls. He’s strictly focused on himself. He even misread Vladimir Putin’s slouching as petulance, when in fact it was most likely that the Russian president was simply bored dealing with someone he deemed unaccomplished and unworthy. Now that’s one of Putin’s shortcomings. Lawrence Eagleburger once referred to Barack Obama as “a charlatan.” Putin obviously agrees with the late former U.S. secretary of state and personally dislikes Obama even more. Russian intransigence on Syria is not unaffected by Putin’s lack of respect for the American president. Obama’s pejorative remark on Putin’s posture does not help.

In the end it is doubtful that the Russian intelligence analysts can come up with a really effective psy war nugget with which to attack the seemingly impervious U.S. president . A Clintonesque harem of concubines is certainly not going to shake up Obama’s presidency — though it might earn him a broken nose from his far stronger wife. As much as Barack Obama is disliked by America’s conservatives, his left-wing and minority population supporters worship the ground on which he walks — and will do so long after he is out of office. There is, however, one thing Putin can do.

Barack Hussein Obama has nothing else to do after his term is over. He fervently will want to remain relevant in international affairs. There is one job for which Obama would consider himself eminently suited. Of course his enemies would say he wants to be “king of the world.” Those more realistic suggest that a stint as Secretary General of the United Nations with enhanced powers to reorganize and make more powerful that corrupt body would be a worthy objective. It’s just the sort of post through which George Soros would arrange to invest a pile of cash. It also is a perfect target for Vladimir Putin to attack.

If there is any serious sign that Obama would desire the UN position, every possible effort will be mounted by the Kremlin to prevent it. In fact, if Putin was truly insulted by Obama, every effort will be put forth by Russia’s leader to block any future ambition Barack Obama may have.

President Obama never did understand what President Putin’s intelligence background and experience meant. Putin will make sure, one way or the other, he gets the message this time. It’s a good rule not to denigrate little Vlad from Leningrad. It’s not business, Barack; it’s strictly personal!