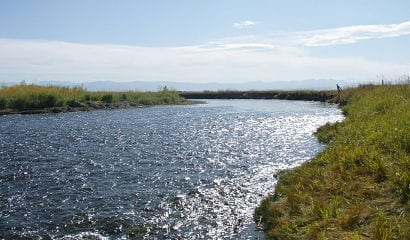 Growing up in St. Louis you come to appreciate the Missouri River very much, especially in the dry season when it makes up almost 60 percent of the flow of the Mississippi River at the foot of the Arch. A recent trip to Bozeman, in southwest Montana’s Gallatin Valley, reminded me of the importance of this part of the country which forms the headwaters of North America’s longest river. The Gallatin River, along with the Jefferson, and Madison, is the origination point of the 2,342 mile journey for a water molecule making the trip to the Gateway City.

Bozeman is a great town at an altitude of 4,820 feet, a population of just over 38,000 souls and a surrounding metro area (if one dare use that term in Montana) of 92,000. It was founded in 1864 by John Bozeman for whom the Bozeman Trail was named. Main Street is a very lively shopping, retail, and dining area with several bookshops. The main Catholic church in town, Holy Rosary, is on this street. I was able to attend Mass there on the Feast of the Assumption and was impressed by the size of the congregation at midday as well as the wonderful restoration work on both the interior and exterior, which appeared to be quite new.

Bozeman is also a university town and home of Montana State University and the Fighting Bobcats, one of U.S. News and World Report’s “best buys” for an undergraduate education. It is a land grant school and has enough acreage to justify that designation.

Bozeman is a 90 minute drive from Yellowstone National Park, and other venues for trout fishing, rafting, hiking, and skiing. Arriving in the airport during the summer season, you find a very happy group of people, many carrying fly rods in tubular cases. Other times of the year, you will see hunters sporting their firearms, skiers their skis.

I get a kick out of asking Montana natives, who either live or grew up on a ranch, how many acres they own. Nineteen thousand or 25,000 acres are not uncommon answers. Everyone, male and female, knows how to ride, hunt (with gun or bow and arrow), fish, and handle themselves pretty well in the outdoors.

After several visits to Bozeman, I finally was able to visit the truly unique and impressive Museum of the Rockies just last week. Originally affiliated with the university, it now boasts an affiliation with the Smithsonian too. This place is all about dinosaurs, and is home to Dr. Jack Horner, the Museum’s famous Curator of Paleontology and science advisor to all of the Jurassic Park movies.

Dr. Horner, a native of Montana, was the scientist who discovered Maiasaura (Greek for “caring mother lizard”), a large duck-billed dinosaur genus found in Montana that lived in the Upper Cretaceous Period 76.7 million years ago. It seems that Montana is blessed with an abundance of excavation sites yielding a treasure trove of paleontological finds. Indeed, many if not most of the exhibits at the Museum of the Rockies are built around and interpret the findings of Dr. Horner, his staff, and graduate students. Both Dr. Horner and Museum have staked out an impressive area for a regional museum that is hard to duplicate outside of a few of the great cities across the globe.

I should also say a word about the Museum’s planetarium, where I indulged myself at two separate shows. It has been probably 30 plus years since I graced the entrance of one with little children in hand. What I missed in the interim was the digitalization of the presentations that has really expanded the demonstrative qualities of these showings, allowing for the graphic illustration of the galaxies and even an approximation of moving through the great void at the speed of light. OK, I’m a sucker for these kinds of things. I saw one show on the Bozeman night sky for that evening and one on the Aurora Borealis. The first one was narrated by a young astronomer with both a lot of information and the ability to make it intelligible even for this recovering lawyer. It seems that the University, the Museum, and the planetarium have a very good relationship with one another.

And the food? Well, my host the Property and Environment Research Center, the original home of “free market environmentalism,” threw a pig roast that was outstanding, the pig weighing in at around 110 pounds. Establishments around town did a great job on a variety of steaks, and fish and other sea food were flown in from the left coast by one other restaurant I patronized. Ted Turner has a place on Main Street.

Western Montana is a very special place, not just in and around Bozeman, the Bridger, and Tobacco Root Mountains, but also, say, at Glacier National Park. The writer Wallace Stegner used to write about our human need for a sense of place, a place we make our home. The good people of this region certainly display that sense and an affection for this wonderful part of America.