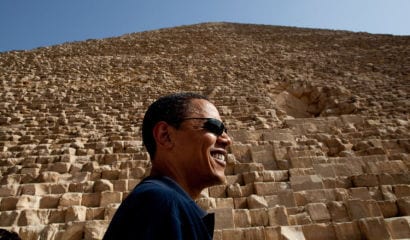 At the root of America’s disastrous policy on Egypt lies Obama’s Islamophilia, a stance which leads him to mistake friends for enemies and enemies for friends. Even at this late date, he can’t make the most basic distinctions between pro-American Egyptian military leaders and anti-American Islamic terrorists. His foreign policy rests not on America’s interests but on politically correct prattle about a non-existent Islamic spring.

According to Senator Patrick “Leaky” Leahy, the Obama administration has suspended aid to Egypt. Naturally, the GOP’s reflexively interventionist busybodies support this decision. “For us to sit by and watch this happen is a violation of everything that we stood for,” babbled Senator John McCain on CNN’s “State of the Union.” What exactly is “everything that we stood for”? Egging on the Muslim Brotherhood? Delivering up a U.S. ally of three decades to a jihadist mob? Protecting democratically elected terrorists who once in power moved to destroy democracy and persecute Christians?

The truth is that Egypt’s military deserves a bonus for beating back the Muslim Brotherhood. If U.S. aid has in fact gone into that effort, it is money well spent. It is certainly more constructive than any of the asinine international projects McCain normally endorses.

“America cannot determine the future of Egypt. That’s a task for the Egyptian people,” Obama said last week. “We don’t take sides with any particular party or political figure. I know it’s tempting inside of Egypt to blame the United States or the West or some other outside actor for what’s gone wrong.”

It is a little late for Obama to strike this innocent pose. His 2009 Cairo speech was a blown kiss to the Muslim Brotherhood, with its pro-revolution blather about how “Muslim-majority countries were too often treated as proxies without regard to their own aspirations” by his odious predecessors. The speech, to which Obama had made a great show of inviting members of the Muslim Brotherhood, laid the groundwork for the overthrow of Mubarak, an American ally, and the rise of Morsi, an Islamic supremacist.

Obama soft-pedaled the problem of radical Islam, treating it as a minor issue that a few good chats could eliminate. Usually not enthusiastic about religion in politics, he suddenly spoke as if the promotion of global Islam qualified as an American value: “So let there be no doubt: Islam is a part of America. And I believe that America holds within her the truth that regardless of race, religion, or station in life, all of us share common aspirations — to live in peace and security; to get an education and to work with dignity; to love our families, our communities, and our God. These things we share. This is the hope of all humanity.”

He somehow thought that he could charm jihadists into better behavior and stabilize American foreign policy on a pillar of Islamophilia. Having learned nothing from this folly, he now gainsays the manner in which Egypt’s military is cleaning up his mess, saying in his statement last week, “we’ve seen a more dangerous path taken, through arbitrary arrests, a broad crackdown on Mr. Morsi’s associations and supporters and now, tragically, violence that’s taken the lives of hundreds of people and wounded thousands more.”

It is hard to take this complaint seriously from a president who still refuses to acknowledge the Muslim Brotherhood as a jihadist operation. According to James Clapper, Obama’s Director of National Intelligence, the Muslim Brotherhood is a “largely secular” organization. Maybe Clapper is relying on CIA Director John Brennan’s Oprah-like definition of jihad: a “legitimate tenet of Islam, meaning to purify oneself or one’s community.”

Such is Obama’s continued faith in the Muslim Brotherhood that he had his Defense Secretary Chuck Hagel repeatedly plead with Egypt’s military to give jihadists positions in the new government. America now finds itself on the same side as Iran in the conflict, with Saudi Arabia on the other side, offering to make up much of the difference in lost U.S. aid.

This is pathetic. Absolutely no American interest can explain it. The only explanation is Obama’s excessive regard for Islam. He was bound and determined to “reset” relations with it, and he got one in the form of scorched embassies, dead diplomats, and a radicalized Egypt, bloodied and torn.