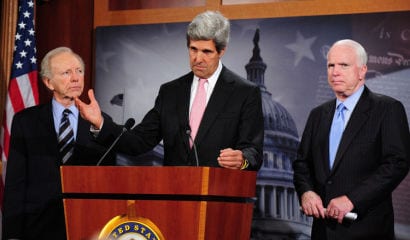 The situation in Egypt is showing us the cost of American incoherence in much of the Middle East. For decades, the United States has had a disconnected foreign policy toward that region — without clarity about the relative importance of human rights versus national security. With notable exceptions such as George W. Bush, the Democrats tend to tilt toward human rights and the Republicans toward national security.

Now we are paying for this vagueness as Egypt, with longstanding traditions of Arab nationalism and moral authority, moves to the brink of civil war between the Egyptian Army and the Muslim Brotherhood. The Muslim Brotherhood is the sponsor of ousted president Mohamed Morsi whom the Obama Administration has supported, along with the exit of former president Hosni Mubarak in 2011. It is an Islamist fundamentalist organization and sponsor of the Hamas, with a long history of violence.

By canceling the joint military cooperation planned with Egypt for September, the Administration has signaled encouragement to the Muslim Brotherhood. However, during his recent trip to Egypt, Secretary of State John Kerry attempted to show neutrality, yet his statements seemed to support the intervention by the Egyptian Army to avoid chaos and restore a democratic system — a paradox indeed. Egypt has the largest military in the Arab world, and U.S. support for presidents Hosni Mubarak and earlier Anwar Sadat was critical to assure peace among Israel and its Arab neighbors.

Egypt must also be seen in context of U.S. efforts to maintain an order in the Middle East. Historically, the U.S. has aligned itself with totalitarian regimes such as the Saudi monarchy and others to secure the supply of oil and gas which are of inestimable importance to our economy and way of life. Destruction of or insurrection in the oil fields would lead to pandemonium in world credit, equity, and commodities markets and the effect upon U.S. GDP and global economic activity could be catastrophic.

During the Iranian elections in recent years, the White House reached out to the Iranian people in a modest way, missing the opportunity to communicate with disaffected merchants and the middle class, intellectuals, women, and college students. Deeply etched in the Iranian memory is U.S. interference in 1953 to topple Mohammad Mossaddegh, an elected leader who nationalized the oil industry. This assured that Mohammad Reza Pahlavi, known as the Shah of Iran, would become the West’s gendarme in the oil rich Persian Gulf until the Iranian Revolution of 1978, effectively limiting Soviet influence and expansion toward the Gulf.

The U.S. invasion of Iraq was predicated in part on the desire to remodel that country as a democracy, a major world oil producer — unique in its geography where the Mesopotamian civilization began. The demise of Saddam Hussein meant removal of the last bastion of Arab nationalism, a powerful force initiated by president Gamal Abdel Nasser of Egypt in the 1950s and now viewed as a potential offset to Islamist fundamentalism.

As for Syria, U.S. antipathy toward strongman Bashar al-Assad is well-known, yet there has been hesitation to aggressively support and supply those who seek to overthrow him. And in the case of Libya, the U.S. provided combat and logistical support for a coalition directed principally by Britain and France to get rid of Colonel Muammar Gaddafi.

The equation in the Middle East has also become far more complicated with democratically elected Hamas in Gaza and Hezbollah in Lebanon, both designated terrorist organizations by the U.S. Department of State.

It is difficult to affirm democratic principles while simultaneously supporting regimes having values antithetical to our own — yet that is what the U.S. has been doing, in the interest of a secure supply of energy. While the circumstances are different in each Middle East country, the U.S. thus far does not have a coherent message about whether we support human rights or national security. And paradox and nuance are lost on street mobs crying for blood and revenge.

The result is that the U.S. acted to install democracy in Iraq, rendered an assist in the overthrow of Libya’s Gaddafi, does not support democracy in Gaza and Lebanon, maintains deep ties with the repressive Saudi and other Gulf monarchies, professes to want restoration of democracy in Egypt, is confused about what to do in Syria, all the while being supine about Iran. To an observer in the Middle East, U.S. foreign policy appears to be inconsistent — yet consistently disingenuous.

There is the question of whether a democracy beholden to repressive regimes for fossil fuels and an order essential to its very being can be coherent in its foreign policy. As George Orwell said in Politics and the English Language, “the great enemy of clear language is insincerity.”