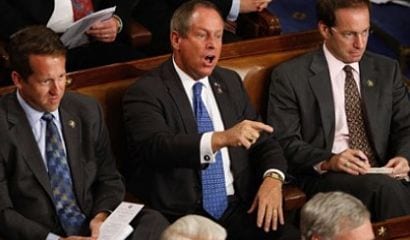 All across the country, people are gearing up for festivities that will mark the first annual “Joe Wilson Day.” Please let me be clear, this is not a day aimed at honoring the ambitious Joe Wilson who at last report was married to the glamorous Valerie Plame. No, here we are talking about the genuinely honorable Joe Wilson, Republican Congressman of South Carolina.

Joe Wilson Day will acknowledge and applaud the Congressman’s bold declaration of the truth about our president, Barack Obama. Four years ago next month, at Mr. Obama’s address to a joint session of Congress on his health care proposal, Mr. Wilson cried out “You lie!” at one of the numerous false statements in the president’s speech. Today, after having had several years to study this president’s truthfulness, objective observers recognize that Mr. Wilson’s verbal volley could serve as a suitable response to virtually every proclamation of our current president.

Our federalist system is intended to allow states and localities to approach matters of public interest in their own ways, and so it will be with Joe Wilson Day celebrations. Some cities will hold large “town hall” style gatherings, with speakers and seminars and panel discussions. Smaller towns may opt for assemblies in the public square. Across all venues, the common theme will be the righteous anger of Americans at the dishonesty of our government and its officials in general, and in particular the fondness for falsehoods of president Barack Obama.

In each locale, selected presidential prevarications will be recalled, and responsive chants of “You lie!” will be invited from the audience. Most programs will lead with a reprise of lies from the very speech that elicited Mr. Wilson’s pointed assessment of the president’s veracity. So, for example, Obama impersonators may regale audiences with these classics from September 2009:

• “First, if you … already have health insurance, … nothing in this plan will require you or your employer to change the coverage or the doctor you have. Let me        repeat this: nothing in our plan requires you to change what you have.”

• “I will make sure that no government bureaucrat or insurance company bureaucrat gets between you and the care that you need.”

• “I will not sign a plan that adds one dime to our deficits — either now or in the future. Period.”

• “The middle-class will realize greater security, not higher taxes.”

To each of these (and others from the same speech) the crowds will roar in unison, “YOU LIE!” Because, as we all now know, he sure did.

Of course, prior and subsequent Presidential Howlers will also be fair game on Joe Wilson Day. Now that he’s been talking publicly for several years, choosing from Barack Obama’s blizzard of falsehoods will be a challenge — but that will simply provide more opportunities for involvement. Not everyone can have a speaking role but there will be positions aplenty on committees tasked with sifting the imperial speeches and placing presidential quotes into such categories as “a real stretch,” “deliberately misleading,” “too clever by half,” and “baldfaced.”

Among many others, expect to be reacquainted with what president Obama said on January 21, 2009, the day after his inauguration. He uncorked some dazzling Presidential Howlers that day:

• “For a long time now, there’s been too much secrecy in this city. The old rules said that if there was a defensible argument for not disclosing something to the American people, then it should not be disclosed. That era is now over. Starting today, every agency and department should know that this administration stands on the side not of those who seek to withhold information but those who seek to make it known.”

• “The Freedom of Information Act is perhaps the most powerful instrument we have for making our government honest and transparent, and of holding it accountable. And I expect members of my administration not simply to live up to the letter but also the spirit of this law.”

We should all revel in these howlers, from a president whose administration has repeatedly flouted federal laws requiring disclosure, including but by no means limited to the Freedom of Information Act. And an administration that has run roughshod over legal and ethical rules to reward “friends” and “corporate clients.” Remember George Soros? SEIU? Solyndra? One could go on and on..

And here’s the winning Presidential Howler from that talk on day one:

“Let me say it as simply as I can: Transparency and the rule of law will be the touchstones of this presidency.”

This from a president who unilaterally declares he’ll not enforce portions of his own signature legislative monstrosity, Obamacare. One could hardly make this stuff up, except that our president and his handlers and teleprompter script mavens make it up every day.

Coming forward in time, to the 2012 State of the Union address, we find another Presidential Howler of the highest order:

“I want an America where … everyone plays by the same set of rules.”

Amazing, this one, suitable to be followed by a recital of the Obamacare exemptions granted to Congress and to the President’s friends and supporters, not to mention his “favors” to unions and “green” energy cronies and others, who now get to play… by different rules!

“If we don’t deepen our ports all along the Gulf — places like Charleston, South Carolina; or Savannah, Georgia; or Jacksonville, Florida…”

These are cities on the East Coast, not the Gulf of Mexico, and anyone with rudimentary knowledge of U.S. geography, and paying attention, would catch the error. Apparently Mr. Obama doesn’t know and doesn’t care, and plainly he sets the tone for those who vet his speeches — not to mention for his cabinet and appointees in his administration; they don’t care either.

The fun need not stop there. At larger events, for example, additional speakers or panels may elaborate on lies by cabinet members, assorted Congressional representatives, agency heads, and other administration officials. After all, Eric Holder, Hillary Clinton, Janet Napolitano, James Clapper, and Lois Lerner, among many others, have displayed sufficiently audacious dishonesty that they too deserve recognition.

Americans are serious about their civic involvement, as Alexis de Tocqueville famously noted. Naturally, participation by members of the public in Joe Wilson Day rites will be encouraged. Early indications suggest that an enthusiastic response is likely. Especially given recent federal attacks on their freedom of speech, Obama clown figures are expected to turn out in large numbers. They will be featured as readers of Presidential Howlers, with awards for verisimilitude and creativity in both masks and manner.

Mind you, this overview has only chipped a few flakes off the falsehood ice floe that is our federal government under Barack Obama. Joe Wilson Day observances will find much more to celebrate about our remarkable president and his men and women in Washington.

Mr. Wilson got pummeled in the press for yelling “You lie!” at our president. But four years on, it appears that what he said applies to some if not all of pretty much every speech and public statement our president makes.

Like him or not, Joe Wilson has respect for the truth. President Barack Obama, not so much. That’s why we need Joe Wilson Day. Go forth with good cheer, and make it happen!