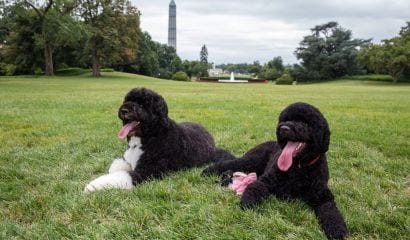 They say prison can change a man. Pvt. Bradley Manning, we see, wasn’t going to wait 35 years to find out.  But what’s with his new moniker, Chelsea? Is this the son-turned-daughter Bill and Hillary would have had if their daughter had been born a son? Will he join the family’s foundation, which could be further renamed “The Bill, Hillary, Chelsea & Chelsea Clinton Foundation”? Given all we’re learning about its jet-setting ways, it would make sense for the foundation to have a Leavenworth chapter. Imagine the glass ceilings that could be broken through, tricky as that may be if as we presume they include iron bars. Personally, we can’t wait to call him Boy Chelsea.

He ain’t no drag, but Obama’s got a brand new dog. Oops, sorry, wrong song. Let’s begin again. “Sunny, yesterday my life was filled with rain/…My life was torn like a windblown sand” — first time anyone’s Martha’s Vineyard getaway was cut short by ill desert winds blowing in from Egypt. But all’s well that end’s well, Bo Obama now has a younger sib and helicopter companion, the aforementioned Sunny Obama. Controversy erupted, because the young ’un is said to be pure-bred, unlike his master and most of the rest of us. Maybe he’d be more appropriate as a gift to baby Prince George of the UK, where such purity is a sine qua non unless it comes named Wallis Simpson. For what it’s worth, we would have named the new doggie Barry, anything to keep hope alive.

Al Jazeera, which is Arabic for Al Gore, made its American debut this week, only to be overshadowed by the impresario who allowed it to buy into American cable television, the self-same Al Gore. All very confusing, particularly now that the just-mentioned Al Gore is often mistaken for the late King Farouk, who really did weigh a ton after he lost his throne but who shouldn’t be blamed for any of the problems currently being faced by the Egyptian government. Without wandering further in the North African desert, let us return to the above-recognized Al Gore and the reason for his unexpected prominence – an interview he granted to the Ezra panel of physicians and specialists about his cholesterol content and blood count. “We’ve already crossed the 400 parts per million mark,” he said. “The question now is how high it will go before we begin bending the curve,” he continued, though we’re unsure whether he meant the curve in his very long driveway or simply the curve of his bubbly paunch. But he would like to see signs of weight loss, he conceded, specifically a “continued release of 90 million tons.” We wish him all the luck in the world, assuming he has any left.

You’ll recall that during our comeback last week we asked for reader input. Some of you did brave NSA interest in your metadata to recommend a plethora of security risks. There was the fellow who fingered “Johnny McAmnesty” — that would be the Arizona Senator who took his immigration reform show to Egypt last week. Oddly, the last thing on his mind was amnesty for the Egyptian military. There was the bloke who restrained himself to nominate “the WOMEN who voted for Obama.” Some stalkers are always asking for trouble. We prefer to heed a fellow we’ll call Stan, who nominated “the U.S. Congress for accepting a subsidy to cover their part of Obamacare!” Yes, it might be better to exchange some of those sickly solons and representatives who drive up health-care costs by taking extended medical leave to lots of exotic locales at the people’s expense – all without changing their insurer or their doctor or ever appearing before a death panel.

Not all of them will get away with it. Johnny McAmnesty, we discovered, didn’t travel alone to the land of the pharaohs. He had in his camel party a fellow you might know as Lindsey Graham, a.k.a. the Hissing Senator from South Carolina, whose ties to Egypt we suspect stem from his being a descendant of a very ancient royal asp family. Never trust an asp, as the saying goes. One month he’s trashing Sen. Rand Paul. The next he’s agreeing with him. Now he’s our EOW. As he’ll discover, we’re not some Junior Miss Cleopatra pushovers.