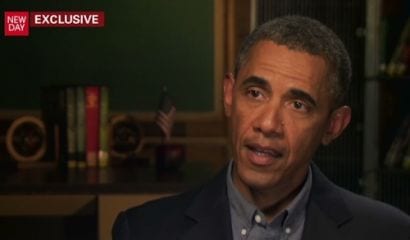 Speaking to CNN last week, Obama whined that Republicans listen to Rush Limbaugh too much. They need to “think less about politics and party and think more about what’s good for the country,” he said. “I’ve made this argument to my Republican friends privately, and, by the way, sometimes they say to me privately, ‘I agree with you, but I’m worried about a primary from, you know, somebody in the tea party back in my district’ or, ‘I’m worried about what Rush Limbaugh is going to say about me on radio.’”

If Obama’s story here is true — that GOP pols whisper anti-Limbaugh fears to him over dinner — they are even bigger weasels than previously suspected. Obama’s attempt to drive a wedge between these spineless Republicans and Limbaugh is part of his drive to build a de facto one-party state. That’s all he means by “unity.”

By “bipartisanship,” he means collusion in error, free of Rush Limbaugh and other conservative voices who would counsel against it. Talk radio is the lever by which American politics is pulled to the right, so Obama has to smash it.

He represents a familiar figure in history: the left-wing revolutionary who rises to power by praising dissent, then stays in power by trying to suppress it. This suppression is usually cast in terms of “civility,” respect for government, or whatever other cant works at the moment. Bill Clinton, furious with Limbaugh, once shouted that the talk show host had a whole “three hours a day” to oppose his policies and sow hatred of “government,” by which Clinton roughly meant liberals in power. Very civil folks like Clinton aide Paul Begala even helped set up a phony “civility” commission at the University of Pennsylvania to stop the rising tide of Limbaughian hate.

Somehow Obama’s concerns about civility didn’t stop him from writing a glowing blurb for domestic terrorist Bill Ayers or dissuade him from attending the “God damn America” sermons of Jeremiah Wright. Out of power, Obama defined dissent as patriotism. In power, he treats it as near-treason.

His comments to CNN are a continuation of the Maoist media strategy his former flaks Anita Dunn and David Axelrod pursued in the first term, when they bumblingly tried to delegitimize Rush Limbaugh and Fox News. Dunn left the White House after her gushing to a high school audience about Mao as her “favorite political philosopher” was exposed, but not before deploying a few of his tactics, one of which is to control debates by banning opponents from them.

Obama nurtures the hopes of a dictatorship, not a democracy. That’s what stands behind all his talk about “obstructionism” from the Tea Party and talk radio. Unable to dispel their arguments, he has to resort to the shorthand politics of demagogic name-calling in the hopes of erasing them from the debate.

“It would be good if Obama could be a dictator for a few years,” said the director Woody Allen in 2010 — a musing that Obama himself would later entertain in a 2011 speech to the National Council of La Raza. “Now, I know some people want me to bypass Congress and change the laws on my own. And believe me, right now, dealing with Congress… the idea of doing things on my own is very tempting, I promise you. Not just on immigration reform,” he said. Obama did acknowledge that that’s “not how our system works,” but the audience brushed that off, chanting “Yes, you can!” and “Change it.”

Presidents in trouble often shoot down at members of the press, so it is a good sign that Obama is back to ranting about talk radio. Richard Nixon had his speechwriters call pundits “nattering nabobs of negativity.” The Clintons denounced a “vast right-wing conspiracy.” Obama’s recurring case of Rush Limbaugh derangement syndrome — the last time it flared up he lost the House — is similarly a measure not of confidence but of fear.