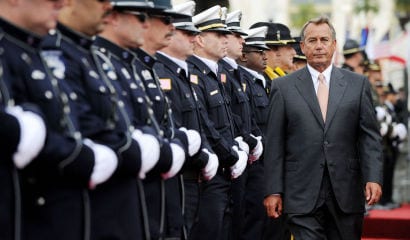 President Obama‘s brazen refusal to “take care that the laws be faithfully executed” is inciting Washington insiders to use the “i” word: Impeachment. Senator Tom Coburn (R. Okla.), who has served 19 years in the Senate and calls himself a friend of the president, told a town hall meeting last week that the president’s actions are getting “perilously close” to impeachable offenses.

That’s premature. But it is time for members of Congress to take their oath to defend the Constitution seriously and call out the president for his repeated violations. Americans love their Constitution and are proud of the rule of law. Congress has a job approval rating of 15%, according to last week’s Gallup poll. Standing up for the Constitution might improve it.

On September 9, Congress will return from its undeserved five-week vacation to face the reality that it has failed to pass a budget for the coming fiscal year, which begins October 1. To keep the government running, Congress must vote a continuing resolution, which is a stopgap measure allowing the president to draw down money from the Treasury to pay federal employees and other bills. Congress should seize the opportunity to give President Obama — who calls himself a constitutional expert — a lesson in checks and balances.

The framers devised checks and balances as a routine way to stop presidents from trying to grab more power than the Constitution allowed, without subjecting the nation to the ordeal of impeachment. The key check is Congress’s power over the purse. House Speaker John Boehner has already said there will be a continuing resolution, not a government shutdown, but he should attach a condition: Mr. President: Obey the Constitution.

It’s unlikely many Democrats will challenge the president’s unconstitutional actions, but Republicans should define themselves as the party defending the Constitution.

For starters, that would mean telling the president he must implement the Obama health law as it was enacted, or delay the entire law for a year. President Obama has been picking and choosing what parts of the law he will implement, including delaying the employer mandate and the caps on out of pocket expenses for policy holders, two key provisions the law stated “shall” be implemented January 1, 2014. These are not victimless crimes. They shift billions of dollars in costs from winners (employers and insurers) to losers (taxpayers and seriously ill patients).

According to the Congressional Research Service, half the deadlines in the law have been missed so far. The result is a mangled version of what Congress enacted in 2010.

The Supreme Court has ruled “there is no provision in the Constitution that authorizes the President to enact, amend, or to repeal statutes.” (Clinton v. City of New York, 1998) The president is obliged to enforce the law as written. For the Speaker to make the continuing resolution contingent on a one-year delay in Obamacare is righting a constitutional wrong.

Boehner could go farther. The president has unconstitutionally declined to enforce some immigration laws and some criminal drug laws, in effect changing the law without Congress’s consent. The continuing resolution could also make funding of the Justice Department and the Immigration and Naturalization Service conditional on the president faithfully executing the law.

In Federalist 58, James Madison, the chief architect of the Constitution, explained that Congress’s power to withhold funding is the “most effectual tool” to prevent a president from abusing power. In 1970, Congress used that tool to defund and stymie President Nixon’s invasion of Cambodia. In 1985, Congress used its power of the purse to cut off President Reagan’s unauthorized dealings with the Nicaraguan Contras.

This time the stakes are higher. If President Obama is allowed to ignore or delay laws, future presidents — whether Republican or Democrat — will assume the same power to dictate what the law is. There will be no point in electing a Congress to make laws, if a president picks and chooses what to enforce. In this country, the rule of law is supposed to be king, not the president.