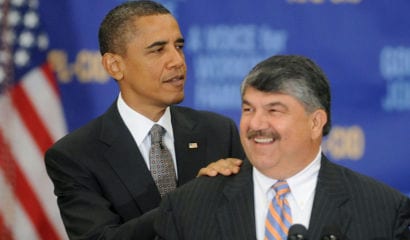 One of the most predictable features of American politics is the biannual blackmail to which the Democrats are subjected by their union bosses. Knowing that “the Party of Jefferson and Jackson” cannot survive without their support, union goons like Richard Trumka usually start the process by complaining about some law that allegedly hurts workers. Then, after a month or two of bombast and bluster, we find that their definition of “worker” is actually “union member” and that they want the Democrats to grant them a special dispensation from the offending law. This is how the infamous Obamacare waiver program was hatched.

Thus, when news reports began appearing a few months ago about union dissatisfaction with Obamacare, it was hardly necessary to consult the Delphic Oracle to know that Trumka, et al., would soon demand a new concession relating to the health care law in return for union support in the 2014 midterms. And, sure enough, the bosses eventually made it known that they want the Obama administration to give their unions special subsidies to which they are not entitled under the “Affordable Care Act.” This concession, which the President has no authority to grant, would provide union members with a double subsidy.

Union members already receive one subsidy, the tax break they get with their employer-based coverage. The new union demand involves multi-employer plans, agreements that unions have negotiated with entire industries rather than specific employers. According to this memorandum from the Congressional Research Service (CRS), such plans can’t be made available through Obamacare’s insurance exchanges. Consequently, union members enrolled in multi-employer plans are not eligible for subsidies offered by those exchanges. The union bosses want this changed so their members can receive a second subsidy.

Trumka and his accomplices claim they only want the White House to “fix” Obamacare, as if the inability of union members to receive double subsidies were a mere glitch in the law. United Food and Commercial Workers Union President Joe Hansen put it thus in the Hill, “As currently interpreted, the ACA would block [multi-employer] plans from the law’s benefits… while subjecting them to the law’s penalties.” This is nonsense. In reality, the union goons are demanding a special favor. And, if they get away with this, union members will be privileged in a way that flouts both the letter and the spirit of Obamacare.

Yet, despite the clear stipulations of the “reform” law and the CRS memorandum, the White House is apparently attempting to make it happen. As InsideHealthPolicy reports, “The Obama administration is working on regulations to address criticisms raised by unions about the health reform law… chief among them that multi-employer… plans have not been designated as qualified health plans so workers enrolled in them wouldn’t be eligible for ACA exchange subsidies.” Needless to say, Obama’s lack of authority to change that part of the law won’t prevent him from doing so if it will help the Dems in 2014.

The unions stepped up their campaign of intimidation last week, as RealClearPolitics reported: “Pressure to fix the Affordable Care Act was a topic of conversation among top labor leaders and senior White House officials this week, AFL-CIO President Richard Trumka and Obama aides confirmed Thursday.” There can be little doubt that these champions of the working man reminded the White House that such “fixes” were promised during the many closed door discussions Obama had with them before thugs like Trumka agreed to the full-throated support Obamacare eventually got from their unions.

In fact, the Washington Times reports that the unions are openly complaining that some of the promises they were made in those backroom deals have not been kept: “Several labor unions, including the powerful Teamsters, penned letters last month accusing Democratic leaders of breaking promises they made to unions in exchange for their support for Mr. Obama’s signature law.” The unions are more powerful than some groups, like the American Medical Association, which supported Obamacare in exchange for empty promises that were immediately forgotten by the Democrats. The unions cannot be so easily ignored.

Which brings us to one of the most worrisome aspects of this issue: It vindicates a belief that many Obamacare opponents expressed about giving the government control over the health care system — government-run health care is inevitably politicized health care. Under such a system, the cost of one’s medical care depends on how much political power one wields. Thus, if you belong to a labor union that contributes huge amounts of money and volunteers to Democrat campaigns, or you’re a congressional staffer who helps write laws that empty the taxpayer’s wallet on behalf of the nanny state, you get special deals.

If, on the other hand, you’re just a non-union working stiff you get… well… stiffed. Every election cycle the Democrats perform a grotesque Kabuki dance with Big Labor that begins with disingenuous posturing on both sides and ends with crooked deals that leave us poorer and with less power over our individual lives. That’s the truly scary thing about the “conversation” between labor leaders and White House officials that took place last week. How many such discussions between corrupt union leaders and crooked politicians does it take to destroy U.S. health care? How many does it take to ruin the country?