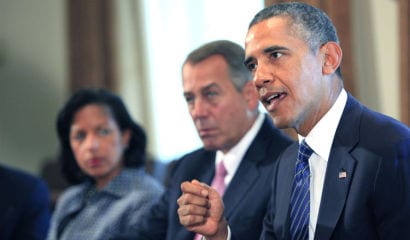 In Obama’s 2002 speech against the Iraq war, he scoffed at “armchair weekend warriors” who pursue “dumb” and “rash” interventions. As if to punctuate that he has become what he once opposed, Obama went golfing on Saturday right after announcing his plans to bomb Syria. Not even Wag the Dog captured that level of presidential cynicism.

In his 2002 speech, Obama said that “petty dictators” don’t justify military intervention, that Saddam Hussein posed no “imminent threat” to the U.S., that war would divert attention from domestic problems, and that a poorly conceived war would “fan the flames” of the Middle East and make a bad situation worse. Substitute “Syria” for “Iraq” in the speech and one has a decent rejoinder to his Saturday announcement: Assad is a petty dictator; he hasn’t attacked the U.S.; this is a wag-the-dog diversion by a floundering president; the lack of any coherent strategy is sure to destabilize Syria and boost Islamic radicals.

The justification for this war, from the vantage point of vital American interests, is nil. It makes about as much sense as Assad announcing that he will launch military strikes on the U.S. because Obama supports the killing of over a million unborn babies a year.

It is sad to see Republicans like Boehner join in this phony harrumphing about evil abroad. Fix your own country. Address America’s moral evils. Pols who can’t stop chemical abortions in America won’t stop chemical bombing in Syria.

Obama has probably spent more time thinking about his golf game than the “women and children” of Syria. Yet we’re supposed to believe that he has made this weighty decision after tossing and turning at night, unable to shake thoughts of the Assad “menace.”

Another dangerous fraud, John McCain, who has never visited a troubled country he didn’t want to bomb, claims that the anti-Assad rebels are “moderates.” When Fox News host Brian Kilmeade said on Tuesday that he didn’t want to back Syrian rebels who scream “Allahu Akbar!” after bombing buildings, McCain, revealing the Islamophilia behind America’s Arab-Spring foreign policy, replied that those chants don’t bother him. “They are moderates,” he said, dismissing the chants as no more “offensive” than a Christian who says “thank God.” Too bad Kilmeade didn’t ask McCain to give examples of Christians yelling “thank God” after slitting someone’s throat. Naturally, the media, which is always in the tank for radical Islam, praised McCain for his “shaming” of Kilmeade.

Among other obvious considerations against war in Syria is that decapitating Assad will expose Christians to brutal treatment from the insurgent rebels. But religious relativists like McCain and Obama pride themselves on brushing off such worries. Obama is no more concerned about Christians abroad than Christians at home. So when a Syrian Christian like Bashar Khoury tells the media that “he’ll leave Syria” if the rebels prevail, you can be sure Obama isn’t listening. Those Syrian voices don’t count.

Speaking to the National Catholic Reporter, Khoury observed that the anti-Assad, pro-democracy chatter about the Syrian rebels is a sham: “What we have are radical Muslims, for instance our own version of Al-Qaeda. The ‘Free Syrian Army,’ fighting for freedom, doesn’t exist anymore. They want an Islamic state in Syria. In some neighborhoods of Aleppo, for instance, they’ve already created an Islamic state and are enforcing shariah. That’s what we’re afraid of as Christians.”

Even a minimally Christian American president would take such comments seriously. But that America is dead. The country is now run by politically correct jackasses who think the anti-Christian Arab Spring wonderful.

Ho Chi Minh once said that he won the Vietnam War not in the jungles of Asia but on the streets of America. Islamic terrorists could make a similar claim: from Libya to Egypt to Syria, they rose to power not in spite of American leaders but because of them. Obama and McCain preferred Morsi to Mubarak, the assassins of Christopher Stevens to Gaddafi, and now the enforcers of sharia to Assad.

Reflexively hawkish Republicans, whose military experience consists largely of playing with toy soldiers in their youth, say “on to Damascus” and suggest that anyone who says otherwise is swallowing the “worm of isolationism.” This is stupid. Should they succeed in helping Obama strike Syria, these armchair weekend warriors will deserve a permanent retirement to the nearest country club.