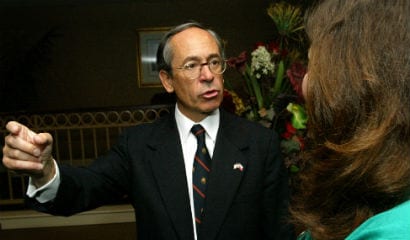 Conservatives have a winning message for Americans of all races. So why don’t conservative candidates win more support among minority voters? Among other reasons—there are, to be sure, a lot of them—because conservative organizations, institutions and grassroots groups never talk to them. The same goes, even during election season, for aspiring or incumbent Republican politicians.

If this is going to change—and it must—there are, I think, three major aspects of the conservative agenda not reaching minority voters that that ought to be.

School Choice
School choice liberates and empowers children and parents of all races. As Rand Paul wrote in the Washington Times on August 30:

Everywhere it is tried, school choice has allowed parents to give their children the education they deserve. Voucher and charter school programs that allow public education dollars to follow the student are greatly improving their performance and giving children so many opportunities….2,000 of our nation’s 20,000 high schools produce roughly 50 percent of all dropouts. Black children have a 50-50 chance of attending one of these schools. [A] Stanford University study showed that 41 percent of students who attend charter schools [in Washington DC] learned the equivalent of 72 days more in reading and 101 days more in math each year than similar students attending district schools.

Yet President Obama’s Attorney General has sued the state of Louisiana to shut down its school choice program, which is helping black and Hispanic children to get a better education today than they would stuck in the state’s worst schools. The only reason Obama has failed to shut down school choice for poor children (of course his children and other privileged kids always enjoy school choice) in the highly successful DC school choice program enacted by Republican majority Congresses of the past is that Congress has never passed a budget under his failed leadership. So his budget proposal to zero out DC choice, which is for minority children, has languished for years.

School choice shifts power from school bureaucracies and teachers unions to parents and children. Under school choice, the money follows the children. So schools would compete to provide what parents want for their children, rather than telling them to stop complaining and go home as today. Each school would be eager to demonstrate that they can be effective at teaching black and Hispanic children reading and math. Out would be quirky education fads, like the New Math and lefty ideological indoctrination, and in would be what works to prepare kids for high school, jobs, and even college.

Conservative think tanks, grassroots activists, even Tea Party groups should be holding conferences and all across America to discuss the spectacular real world results of actual school choice reforms.

Personal Accounts Freedom and Prosperity
President Obama talks repeatedly about inequality of wealth and income in America, which actually has accelerated greatly while he has been President. The top 20 percent have been riding the wave of the record breaking stock market, and booming corporate and bank profits. But the incomes of everyone else, the entire bottom 80 percent, have been declining, into a swamp of part time jobs, with declining real wages after inflation, and no benefits.

That includes the middle class that Obama is constantly talking about, which has lost the equivalent of a month’s pay for a year under his presidency, with real middle class incomes actually declining more during the supposed Obama recovery than they did during the Bush recession. And it includes the poor, for whom the poverty rate has increased every year that Obama has been President, up more than one third overall! The Census Bureau reports that more Americans have been in poverty under President Obama, effectively a separate nation of 50 million, than at any time in the more than 50 years that Census has been tracking poverty.

During President Reagan’s economic recovery, by sharp contrast, incomes for all Americans, from the top 20 percent to the bottom 20 percent, rose. The rich got richer, but the poor also got richer. Moreover, once Reagan’s recovery took hold, the poverty rate declined every year for the rest of his Presidency, falling by one-sixth from its peak, reversing an increase of one third in poverty that began under President Carter.

But if President Obama wants to reverse accelerating inequality, he and his Democrats can support personal savings, investment and insurance accounts for both Social Security and Medicare. The middle class and the poor can then join the top 20 percent in riding booming corporate profits and rising stocks as well.

If a middle class, two earner couple could save and invest in their own personal accounts over their careers what they and their employers would otherwise pay in payroll taxes, at just standard, long term, market investment returns, they would reach retirement with a million dollars or more, in today’s dollars after adjusting for inflation. That would pay them several times more than Social Security even promises them, let alone what it could pay.

Moreover, even the working poor with husband wife working and earning at or near the minimum wage their entire lives, would reach retirement with close to half a million. That can and would provide a foundation for the higher education and careers of their children.

And you don’t have to go all the way to Chile to see personal accounts proven to work in the real world. You can see the same results right here in America, in and around Galveston, Texas, where the local government workers chose a personal account savings and investment system to opt out of Social Security more than 30 years ago as well.

Which conservative think tanks have been going into the ghettoes and barrios and inner cities across America to explain this conservative, free market idea and opportunity? Heritage? AEI? Cato? Who has been on Univision explaining this?

Why has no conservative organization brought José Piñera, the former Labor Minister who led the personal reforms in Chile, and whose brother is now President of that country, to America to explain what has happened with Social Security personal accounts there, and how the same can happen here? He can speak in Spanish to Hispanics on Univision, and in LA, Las Vegas, Phoenix, San Antonio, Houston and Dallas.

This was an idea that Reagan himself promoted for years and years, starting in the 1960s, which he picked up from Milton Friedman. If only we had such leaders among conservatives today.

Ending the Democratic War on Women
President Obama and the Democrats won lots of votes from young single women last year telling them Republicans and conservatives were coming to take away their contraceptives. No one, not Republicans, not conservatives, told them that the U.S. Supreme Court had already ruled almost 40 years ago that trying to do so would be unconstitutional under the landmark ruling of Griswold v. Connecticut in 1965.

But President Obama and his Democrats have been conducting their own highly successful war on women, in sharp contrast to the boom America’s women enjoyed under Reagan.

Reagan entered office facing double digit inflation, double digit interest rates, and soon double digit unemployment, which Reagan dubbed the misery index. Real median family incomes had been falling for several years, while poverty rates were sharply rising, just like under President Obama today. The tight money and double digit interest rates that eventually broke the back of inflation also produced the worst recession since the Great Depression up until that time, starting 6 months into Reagan’s first term, and lasting through almost his entire second year.

Who is carrying the message of economic growth today to those who need it most, the poor and needy? Who is taking up the debate today on the foolishness of Keynesian economics, which conservatives buried so thoroughly more than 30 years ago, only to watch Obama dig up the dead body and play Weekend at Bernie’s?

It should be us.