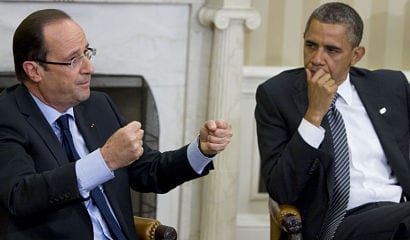 After Barack Obama’s flop at the G20 last week in Saint Petersburg, where he failed to persuade a single leader of the world’s industrialized nations to get involved in still another Middle East civil war, John Kerry brought his dog and pony show to Paris on Saturday. Visibly relieved to be among the friendly folks of “our oldest ally” — and so much for the special relationship with Britain — he stood beside Foreign Minister Laurent Fabius at the Quai d’Orsay and wowed a press conference by speaking his comically accented French. It was time to teach the beastly Bashar al-Assad a lesson with a “targeted and limited” strike that would be quick ’n’ easy, we must heed our “collective conscience,” a message had to be sent, yada yada yada.

Summoning up his recently discovered bon mot, he repeated that we were facing our “Munich moment,” indicating that either he doesn’t know what happened at Munich in 1938, or he doesn’t understand the difference between Nazi Germany’s forcible annexation of part of a sovereign country and an ethnico-religious civil war. (It must be simple ignorance; surely Vladimir Putin could not have been right when he said Kerry was lying and he knew it.) Fabius, usually an astute diplomat but obviously acting on orders from a newly bellicose President François Hollande, then laid on a thick coat of half-truths and question-begging about the horrible images of gassed children and thus the imperative necessity of “punishing” Assad.

If we don’t bomb him, he said, North Korea, Iran, and other heavies would wreak havoc on the civilized world — a new version of the old 1950s interventionist domino theory. Neither he nor Kerry said a word about the possible consequences for world peace of throwing a match into the Middle East tinderbox, already destabilized by the myopic, Western-sponsored “Arab Spring” that unleashed the dormant Islamists in Tunisia, Libya, and Egypt. Or about the dangerous historical precedent of launching missiles against a sovereign country not in reply to aggression, but to save the face of a politician who ineptly painted himself into a corner.

There are many unintended paradoxes and ironies in this bizarre Franco-American crusade. (The French have an expression for such an unnatural situation: it’s like marrying a carp and a rabbit.) A main one is that France has seldom missed an opportunity to try to limit American power. In 2003 it was Jacques Chirac’s threat of a veto in the Security Council on action against Iraq — Foreign Minister Dominique de Villepin, representing the wisdom of the Old World, memorably lectured America against any strike not endorsed by the United Nations — that hobbled the U.S. in forming a coalition. Hollande’s own Socialist Party even invented the slur “hyperpower” to ridicule American military strength and warlike tendencies.

Today, however, we are treated to the improbable spectacle of Obama and Hollande happily marching hand in hand down the path to war. Of course, the two of them do suddenly have much in common. Both lacked experience in international relations when they came into office; both are social democrat liberals from parties that traditionally abhor war but who, each for his own mixed motives, suddenly find it attractive; both have failed to convince their publics and parliaments of the need to attack Assad; and neither has articulated a credible objective and exit strategy if they do attack. One other similarity: both bear out the truism that weak leaders are the most dangerous, because they have the most to prove.

Whatever Obama’s failings, Hollande, France’s accidental president, is in the weaker political position. Struggling at home with intractable unemployment over 10 percent, catastrophic national debt, and growing public resentment over issues like same-sex marriage and worsening violent crime, he grabbed at the straw of another military adventure to get the French to rally around the flag. It worked for Nicolas Sarkozy when he launched strikes in 2011 to help the rebels in Libya. It worked for Hollande himself last February, getting him a bump in the polls when he cast himself as a war president, sending 4,000 paratroops to Mali to stop the advance of Islamist rebels. The career Socialist Party hack known for vacillation who was openly mocked with the nickname Flanby — a wobbly, gelatinous canned custard — suddenly looked like a decisive commander-in-chief taking strong action against the jihadists.

Syria, he apparently reasoned, presented a similar opportunity to score points by taking the moral high ground. With a long hot autumn coming up as the disgruntled French returned from vacation and labor unions already planning protest strikes for early September, he hastily declared he would “punish” Assad for using chemical weapons. And he would do so immediately by the authority invested in him by the French constitution, which empowers the president to order military action without parliament’s approval. Nor, like his brother-in-arms Barack Obama, would he bother with getting a green light from the UN Security Council.

But Hollande has been tripped up by several factors. In the first place, the analogy with the Mali operation is faulty. France had interests at stake in Mali due to its long colonial presence, and the country’s leadership had asked France for urgent help. The National Assembly approved military action, as did the UN, and public opinion went along. None of this applies to his sudden hostility toward Assad.

Then, after getting himself far out on a limb with repeated threats to strike, Hollande was left dangling and painfully isolated. The British parliament surprisingly rejected Prime Minister David Cameron’s motion on military action on August 29, and Barack Obama reversed field two days later, deciding he would, after all, seek congressional authorization. “Hollande has just been cuckolded by Obama,” scoffed a member of the right-wing National Front party, which has consistently opposed a strike because it saw no French national interest involved. “His speeches drip with moralizing, but what do we have to gain by military action in Syria?” he said. “What are we going to do, be the boy scouts of international morality?”

His failure to prepare his position thoroughly also left Hollande isolated and on the defensive both within the European Union and at home. Determined to be the star of his own show, he eschewed any attempt at coalition building. He flouted France’s long diplomatic tradition of working through the UN. He disdained consultations with any of the 27 other EU member countries, especially France’s all-important partner Germany. As a result, Angela Merkel has given only lip service to the idea of a response to the use of chemical weapons, emphatically rejecting any German military involvement. And Herman Van Rompuy, president of the European Council, stated the EU position clearly when he said flatly, “There is no military solution to the Syria conflict.”

At home, Hollande’s high-flown bloviating about “international law,” “international norms,” and sending a message leaves the French public cold: polls show fully two-thirds of them don’t buy it. Like Obama’s Democrats in Congress, Hollande’s Socialist Party is split on the issue, denying him a solid political base of support. “What’s the plan after Assad is toppled?” questions one socialist lawmaker. “The best-organized opposition forces, both political and military, are the Salafists.” They also worry about the 1,000 French soldiers with the UN peacekeeping force in southern Lebanon, who would be among the first to suffer from a Hezbollah attack.

All this leaves Hollande in what many French consider a humiliating position. Having admitted that France doesn’t have what it takes to strike Assad alone, and with the U.S. his only military partner — a mini-coalition of two — he now has lost his autonomy of decision. All he can do is wait for the U.S. Congress, and Barack Obama, to decide the next step for him. Like the grand old Duke of York who had ten thousand men, Hollande marched France up the hill and is now, embarrassingly, marching it down again. As the strongly nationalistic Le Figaro expressed its considerable displeasure in an editorial, “Now we are in the position of having to wait to see if we might just possibly participate in a war that could, maybe eventually, be decided by Republicans in the House of Representatives. Hollande’s haste to be in front on this issue now shines a cruel light on France’s impotence.”