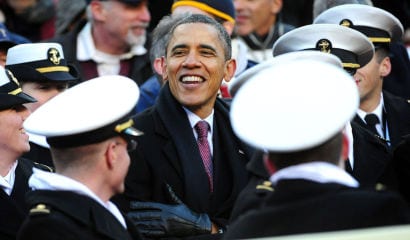 Herman Wouk’s novel of World War II, The Caine Mutiny, explores the problem of a U.S. Navy warship with a bad captain.

The Navy regulations provide that in the most unusual and extraordinary circumstances — which appears to mean the captain of a navy ship going mad, but which might also cover treasonable behavior by the captain — the next senior officer may take command.

However, there is no provision for a more likely scenario — a captain whose behavior cannot be described as madness, but who is gradually falling more and more short of minimal competence and ability.

In the case of the USS Caine, the officers first begin to suspect all is not right when the ship is towing a target. The new Captain, Queeg, is so busy reprimanding a sailor for not tucking in his shirt-tail that he does not notice the ship is steaming in a circle. The ship cuts its own tow-line and Queeg, instead of making the obvious decision to retrieve the now drifting target, radios base to ask what to do. He cannot accept the responsibility, refuses to acknowledge he is in any way at fault, and claims the tow-line parted because it was defective.. One officer comments: “We’re in trouble with this joker!”

Queeg, unable to cope with the terrible strain, responsibility, and loneliness of wartime command, continues to make bizarre and inappropriate decisions. He loses the respect, confidence, and support of the other officers, and this forms a vicious circle. Doubts about Queeg’s sanity grow. Yet none of his behavior is quite so over the line that it can clearly be called madness.

Two officers who go to the Admiral to complain about Queeg come to believe, as soon as they are away from the ship, that their complaints would sound ridiculous amid the admiral’s considerations of grand strategy. And the Caine does fulfill its assignments, mainly dull convoy escorting, even if it is an inefficient and unhappy ship. Finally, in a typhoon Lieutenant Maryk, the executive officer, a fisherman in civilian life and generally recognized as the best seaman on board, believes Queeg’s orders are endangering the ship and takes over.

At the subsequent court martial Queeq is at first entirely plausible, but breaks down into bizarre behavior during cross-examination (a scene made famous by Humphrey Bogart as Queeg in the film of the book). Maryk is acquitted but with a black mark against him that means his dream of transferring to the permanent Navy is destroyed. Whether or not the Caine would have survived the typhoon without his intervention, we do not know.

In President Barack Obama, the United States today has its Captian Queeg on the bridge. He has not committed the “high crimes and misdemeanors” which the Constitution has established as the grounds for impeachment, or at any rate the necessary majority of Congress could not at this moment be convinced that he has. Nonetheless, his administration has produced a record of bungling and bad judgment not even approached by any previous President of modern times and perhaps ever.

As the U.S. Navy regulations had nothing to cover the case of Queeg — what might be called borderline madness — so the U.S. Constitution has nothing to cover the case of Obama — a president with a fixed term of office, who is not mad in the literal clinical sense, but desperately incompetent, and who now appears to be looking to a strange, one-sided alliance with some of America’s most dire enemies.

Like Queeg, Obama functions adequately at a low level of responsibility, and like Queeg he is unable to handle a real crisis. Like Queeg he has never had to face a real enemy in the military sense. Like Queeg, he has very considerable cunning and plausibility in protecting his own ends. Add to this the fact that he is the first president to reveal himself as hating and despising much of the traditional culture of the United States and a wish to see it weakened.

The Queeg-type incidents are mounting up, though they are infinitely larger and more serious: the “beer summit” first showed, like cutting the tow-line, a disturbing oddity of behavior. This was followed by the betrayal of Poland and the Czech Republic over missile defenses, the ludicrous claim that the Benghazi massacres were provoked by a video on YouTube; the vow, made a year ago with all the sincerity of the utterances of a ventriloquist’s dummy, to bring the Benghazi killers to justice; the IRS scandal — a direct affront to the whole spirit of the Republic; his role in the Martin-Zimmerman affair, the destruction of American prestige in Egypt and almost every part of the Middle East and to a degree in Europe, the golf and safaris in the midst of crises… the list goes on and on.

The whole sorry drama has moved through the classic stages of fantasy, from the heady glamour of the inauguration and the Nobel Peace Prize to a possibly catastrophic divorce from reality now. Macbeth or Richard III would have recognized the pattern.

It may be that Syria will prove to be Obama’s typhoon, when it all implodes together. Sending the U.S. into Syria, unsupported and with no clear aim in view, may be the crossing of a red line in a different sense to those Obama has applied to the term — a crossing from Queeg-like inadequacy and ineptitude into actual madness.