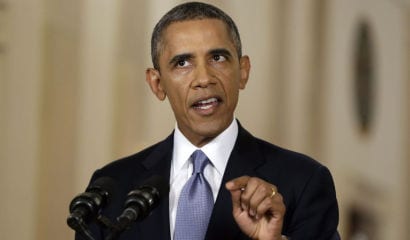 President Obama’s speech on Tuesday night befit his wilting presidency. It was “a speech in search of a purpose,” noted Fox’s Brit Hume, who put his finger on its greatest absurdity: Obama was demanding support for a vote that he now doesn’t want held!

Americans are already bewildered by Obama’s odd need to create a national crisis where there isn’t one, against a remote and elliptical power that has done nothing to the United States. Surely this speech only deepened their confusion.

Obama tried to give listeners some inside baseball on the gassing of Syrian civilians, as if he had collected the crime scene evidence himself. It is strange that a president who couldn’t control the hair-and-blood samples at his own torched consulate in Benghazi and who still hasn’t captured the terrorists responsible for it should adopt such a cocky air about a murky civil war abroad.

Obama would like people to think that Assad told his military—“Let’s gas women and children with chemical weapons”—but that hasn’t been proven. What Obama offered as incontrovertible evidence wouldn’t have sealed a conviction at Nuremberg. Maybe Assad deliberately killed these people; maybe he didn’t. Vladimir Putin, the leader from whom Obama is now taking his cue, says that Assad did not gas women and children. If Putin is lying about that, why has Obama taken up his offer to negotiate a resolution?

It also strains credulity that a president who supports partial-birth abortion and couldn’t bring himself to support an infanticide ban in the Illinois legislature is in a moral panic over “pictures” of gassed children. Hasn’t he seen the pictures of mutilated fetuses aborted at his friends’ Planned Parenthood clinics? If those pictures don’t bother him, the Syrian ones don’t either. The claimed moral superiority of his position is a sham. If it is okay for the U.S. to bomb Syria over disturbing collateral damage in a civil war, then it is okay for Syria to bomb the U.S. over a million-plus abortions a year. Obama’s America doesn’t have the moral authority to play mall cop to the world, much less policeman.

Besides, if the mistreatment of women and children is now a compulsory reason for war, then Obama’s military, implementing this new doctrine, will need to conduct  strikes every week. China kills female infants. Should we ready a military strike on Beijing? How about Saudi Arabia’s treatment of women? Is Obama poised to take out Riyadh? Why is he stopping at Syria if the humanitarian case for war “can’t be ignored”?

He rattled on about the singular dangers of chemical weapons with a kind of monomaniacal naïveté, as if the despots of the world aren’t fully capable of killing civilians non-chemically. Obama’s thin red line must bring a droll smile to their lips.

Who is he kidding? They know perfectly well that Obama’s America is a declining power with idiotic priorities. A half-baked military adventure in Syria won’t change their behavior one iota. Nor even would a fully-baked one, which would undoubtedly go sideways, as Islamic terrorists replaced Assad and killed our occupying troops. It is a toss-up as to what is more disturbing: the flakiness of Obama’s scheme or the bellicose baying of on-to-Damascus-and-Tehran-style neoconservatives.

The latter should put their toy soldiers down and consider the consequences of hubristic interventionism — consequences that usually start with dead children and women. Moreover, what special moral wisdom do they possess again? Some of the same neocons harrumphing over chemical weapons abroad are perfectly content with chemical abortions at home. They can’t be trusted to civilize their own country, much less impossibly tricky Middle Eastern ones.

Now they will get all worked up about “Putin playing Obama.” Even if that is true, so what? At least it might keep us out of a stupid war. The need to create an enemy out of Putin is infantile. What makes him so awful again? That he won’t let NAMBLA march in Moscow? That Russian rockers can’t spray-paint cathedrals? The truth is that he is no worse than any other Western leader, most of whom are proponents of the culture of death. They are in no position to lecture Putin on threats to innocent life.