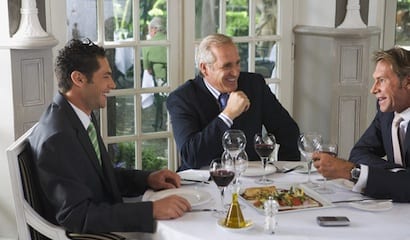 As you know, I have to pass on your accounts, and by Hades you’ve kept me busy! There’s dinner here, dinner there, dinner everywhere. Do you ever eat at home? And the places you go. The Inn at Little Washington, Komi, CityZen: restaurants that cater to lobbyists and one percenters. Plus I’ve looked at your entrées. Candied lark’s tongue. Eight-spice octopus. Snake venom soup.

Honestly, Wormwood, we both know how much we cleaned up during the Fed’s bailout of the bankers, but there is a limit! Still, you tell me it’s not for yourself but rather research for the mission field. Don’t I know, you ask me, that gluttony is one of our Seven Cardinal Virtues? My dear fellow, don’t lecture me about morals! Need I remind you that I was a senior lecturer in Immoral Theology when you were a young devil setting fire to little puppies’ tails?

I must tell you, moreover, that I have never found gluttons particularly attractive. Do you know why I think this “sin” made the Enemy’s top-seven list? For no reason save the number seven. He had lust, greed, sloth, wrath, envy, and pride, all proper virtues for precisely our kind of people, and Six Deadly Sins simply didn’t cut it. He needed a prime number. You know—Seven. As in Seas, Wonders, Samurai, -Up. So He added Gluttony. Must have been a Fast Day back at the monastery.

That said, His servants’ hearts aren’t really in it. That busybody Aquinas struggled to create a list of ways in which one might be guilty of gluttony: eating too soon, eating too eagerly, eating too daintily, and so on. As if you and I captured the souls of people who ate too daintily!

Did I ever tell you how, years back, I once ate at one of your tony restaurants? I had been assigned to a project (a man we would now call a “foodie”) in Los Angeles, and he had my secretary on the line. “He wants to know how much you’re willing to spend,” she asked me. This was someone whose soul I very much wanted, and so I told her we would spare no expense. He took me to Beverly Hills (where else?). We were on course 23 of an interminable meal—a single pea in a thimbleful of snail darter broth—when I asked the waiter when we’d come to an end. He brought out the chef. “The end of a meal?” he wondered aloud. “Who can say what the end of something is? Or the beginning?” A typical California answer. You can see why I avoid the place. Like Adam in the Garden, they have no consciousness of sin.

In any event, I don’t even know whether foodies might properly be called gluttons. I mean, it’s not as if they’re the sort of people who try to bankrupt an all-you-can-eat spaghetti joint. Maybe they eat “daintily,” but what kind of a “sin” is that? For them it’s simply a hobby, like stamp collecting. Right now they’re working on preparing the molecular essence of tartufo nero on a 3-D printer.

Forget places with good food, my dear nephew. Forget even foodie haunts. I’ll tell you where to hang out. Go to your K Street restaurants, a place like Morton’s. Or Café Milano, with its NPR development patrons. A place with Power Tables, where one ignore his guest and leans across the booth to talk to the superlawyer at the next table. (“Bill! How are you doing! Long time no see! You were great on CNN! Unh, Ebenezer, do you know Mr. Bennett?”) A place where it’s about parading one’s status, and not the food.

Or better still, try Whole Foods. You should be looking for the people buying organic, Fair Trade arugula and radicchio. The people who fetishize their politically correct diets, who eat for the moral afterglow and not the taste.

This is all rather new. People didn’t much care about food 50 years ago, did they? Neither the Enemy nor us. And that didn’t seem to matter. In that roast beef-and-potatoes, kippers-on-toast era, people defined virtue in a different way. It had everything to do with one’s character and nothing whatever to do with the way one either looked or dressed.

We’ve come a long way since then. Remember when piety was said to be a virtue? Talking people around that was a bit of an uphill battle for us, I’m afraid. And of course there was humility, what today is known as a severe self-esteem problem, one that happily affects few of our parishioners. Also chastity, which today is part of the Republican War on Women. It’s been a struggle, but we’ve managed to persuade people that what used to be called virtue was either misguided, self-denying foolishness, or else “evil,” in the sense that that word was once used by the Enemy.

Of course, one could not simply stop there. Eliminating old sins leaves a void. Every society requires its scapegoats, and if these could no longer be the impious, the proud, and the unchaste, a different set of transgressors was required. Which was where Mayor Bloomberg came in, with his ban on super-sized soft drinks. (I don’t suppose your foodies have ever drunk what is called a Big Gulp at a 7-Eleven.)

Libertarians say that the state naturally desires to expand its scope, which is to say, its power. But this is rather too simple an explanation. The state (like Mitt Romney’s corporations) is comprised of people. And it is people, my dear Wormwood, who naturally desire power. Give it to them, and they naturally want more. And if you’re the mayor of New York, what are you going to do? Sure, there will always be welfare recipients to coddle, mosques to visit, but that’s nothing as good as beating up on the lumpenproletariat swine who swill down hot dogs with 16 oz. Cokes.

Your progressive always wants to nudge people along. And of course he’s always the nudger, never the nudgee. It’s all about improving the Lower Slobovians, never oneself. “I stand above them,” says the nudger, “and herd them along, poor swine. Where would they be without me?”

Try to find those people, my dear nephew, right after they’ve issued a new regulation and are still basking in the glow of progressive virtue. Think of them as roast suckling piglets at one of your foodie restaurants, just waiting for you to dig in.

P.S. Some time you must try an $8 bowl of pho at Eden Center in Falls Church with me. Not that our kind of people go there.