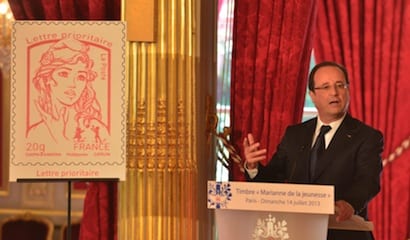 THE NUGATIOUS PRESIDENT of France, François Hollande, only one year into his five-year term, has again managed to raise Gallic hackles over what should have been a fairly routine matter, to wit, issuing a new postage stamp. Many of the world’s governments do it all the time without travail. But no, Hollande, a professional socialist, had to play politics with it, and you don’t play politics with the redoubtable Marianne with impunity.

This captivating lady began her allegorical life representing Liberté, Égalité, Fraternité in 1792 with the founding of the First Republic. She was most famously depicted by the romantic artist Eugène Delacroix in his monumental painting La Liberté guidant le peuple commemorating the July Revolution of 1830. (In case you missed it, she’s the buxom woman on the barricade wearing a Phrygian cap and brandishing the tricolor, her casually draped robe open to the waist.) A bit later she began to appear in the form of patriotic busts that decorated town halls all over the country. The models for these mythical females were anonymous, but all had one thing in common: a well-developed, piquant poitrine. As a village mayor once coyly explained with impeccable Gallic logic, “Marianne represents the motherland. She has to have what it takes to feed her children.”

She started appearing on French postage stamps in 1944. Marshal Philippe Pétain’s collaborationist regime had banned Marianne’s image during the war, the Nazi occupiers considering it a dangerous incitement to rebellion. Thus one of the first decisions in liberated France was to defiantly make her ubiquitous on every letter posted. Her face, that of a generic if comely young woman, was the fruit of the artist’s imagination until 1969. Then an abstract republican symbol was turned into a sex symbol with the choice of Brigitte Bardot as the model.

She was chosen partly because she was easy to look at—the bust, designed by an artist best known for his titillating pinups in girly magazines, made the most of Bardot’s considerable attributes—but also because French intellectuals like Simone de Beauvoir declared her the beau idéal of a liberated woman. (Some politicians, too, found a flesh-and-blood Marianne more attractive than an abstract symbol. Bardot recounted in her memoirs that during a visit to the Élysée Palace, President Valéry Giscard d’Estaing sat close, ran a hand up her thigh, and asked if there was anything he could do for her.) In the 1980s the choice was Bardot’s younger rival, the coldly beauteous actress Catherine Deneuve. Her dedication to Liberté, Égalité, etc. and to bourgeois morality was not her strong suit. Besides being voted the world’s most elegant woman by the American press, her main qualifications for symbolizing the consummate French female were having seduced and had a child by Bardot’s first husband, Roger Vadim, as well as having another minus wedlock by the Italian actor Marcello Mastroianni.

This was getting to be fun, and France’s 36,000-odd mayors wanted in on it. In 1999 they voted for the first time to decide for themselves whose bust, as it were, would adorn their town halls as the country’s sex/political symbol. The official criteria said Marianne should embody an antinomic mélange of virtues, ranging from “maternal protectiveness and sensuality,” to the “youth and dynamism” of the modern French woman. After going through the motions of considering a windsurfing champion, a TV journalist, and a pop singer, they got down to business and—surprise!—chose the voluptuous model-actress Laetitia Casta.

At least they were consistently voyeuristic. Until now, Marianne has always been either an abstraction or an exemplar of pulchritude, but she was never the vector of political propaganda. That changed last July 14, when François Hollande, fresh from a Bastille Day parade where he was soundly booed by conservatives and Catholics for his ultra-liberal stance on issues like taxes and same-sex marriage, ceremoniously unveiled the new Marianne.

Today’s face of France, whose likeness will be printed every year on 2.4 billion stamps, is based on that of Inna Shevchenko, a Ukrainian social/political agitator and co-founder of the aggressive feminist group Femen, who expresses herself chiefly by taking her shirt off in public. At the unveiling, Hollande called her the symbol of “a strong, farsighted France that takes its own destiny in hand and fulfills the promise of youth,” whatever that means. More important, though, was his implication that this stamp, its model, and everything it signifies are to be the emblem of his presidency.

He went out of his way to find designers who were on his militant liberal wavelength. Olivier Ciappa is a French artist and photographer known for his gay rights activism; his recent photo exhibit in Paris of “imaginary couples,” including homosexuals and lesbians, was vandalized twice by conservative groups that found it offensive. He argues lamely that Shevchenko is the right model because the original Marianne would have been a member of Femen if it had existed in her time. His partner on the project was one David Kawena, an illustrator specializing in children’s T-shirts. His leftist credentials are similarly solid: He did the T-shirt emblazoned with Barack Obama’s face that was a hallmark of the president’s 2008 campaign.

Shevchenko’s Femen group, based in Kiev, claims chapters in nine countries on four continents. Her soi-disant shock troops have used their “sextremism” tactics—charging around topless, mammaries flapping, while screaming obscenities—at the Vatican to protest the Catholic Church’s “oppression” of women, at the European Parliament to push homosexual rights, at the Davos World Economic Forum to gripe about income inequality, and before the main altar of Notre Dame Cathedral in Paris just for the hell of it. Shevchenko herself is wanted by Ukrainian police for expressing her hatred of religion in general by chopping down a wooden Orthodox cross in Kiev last year. The 23-year-old absconded to France, where the Hollande administration readily granted her political asylum, as if she were some sort of female Aleksandr Solzhenitsyn fleeing the Gulag. She now enjoys the full protection of French law and is free to develop the movement as she pleases. She has already set up a training camp for topless jihad volunteers here.

Many French wonder why Marianne had to be a foreigner. They also question whether the provocative leader and co-founder of Femen, with its childish antics reminiscent of the unlamented bra-burners of the 1960s, is really the best symbol for today’s France. They don’t even find her particularly pretty. “The stamp is plain ugly,” runs a typical online comment. “This Marianne has the large eyes of Japanese mangas, and I still can’t tell what she’s supposed to be doing with her hands.” And—oh the irony in the case of an advocate of topless agitprop—it doesn’t even show anything below the neck.

THE BROUHAHA OVER Hollande’s gratuitously provocative postage stamp is getting uglier. Shortly after he unveiled it, a fire unlikely to be accidental partially destroyed the apartment that serves as Femen’s Paris headquarters. One member said the group is now receiving daily death threats. Olivier Ciappa complains that protesters are ringing his doorbell and calling his phone number at all hours of the day and night. And, with irate traditionalist Gauls after his skin, he has to be accompanied by bodyguards every time he steps outside.

Hollande, who had never held elective office before becoming president by accident last year—the accident being front-runner Dominique Strauss-Kahn’s political suicide in a New York hotel room—has made another egregious miscalculation. His policy of trying to tax France’s way out of its catastrophic debt is suffocating French business and has the middle class up in arms. His ramming same-sex marriage through Parliament this year for purely ideological reasons has needlessly sparked growing grassroots opposition to him throughout the country. Now his gross, maladroit manipulation of France’s national emblem is outraging many ordinary French.

Conservative and religious groups are calling for a boycott of the stamp—others without the offending image are available at post offices—saying it is “soaked in violent ideology.” The center-right Christian Democrat party called it “an affront to the dignity of women and the sovereignty of France.” It may even achieve the dubious distinction of mobilizing the female vote against Hollande, who has already alienated many women by eschewing marriage to his live-in mistress. As one group asked in the name of scorned French womanhood, “Are there not enough beautiful and emblematic women in France that we have to import our models from Ukraine?” Where’s Brigitte Bardot when we need her?