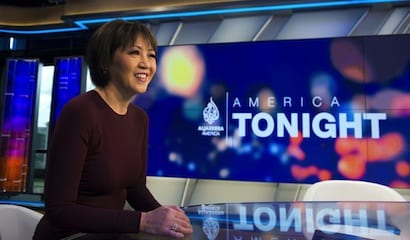 NEW YORK TIMES media reporter Brian Stelter greeted the August 20 debut of Al-Jazeera America by gushing that it was “the most ambitious American television news venture since Rupert Murdoch and Roger Ailes started the Fox News Channel in 1996.” Conservative columnist Diana West lamented that “a 24/7 Muslim Brotherhood channel is now beaming into living rooms across the country.” But when I tuned in for some of the network’s inaugural programming, I found myself unable to muster either enthusiasm or alarm.

West’s supposition about Al-Jazeera America’s ideological slant was based, of course, on the history of the original Arabic-language Al-Jazeera, which first hit the airwaves November 1, 1996, just three and a half weeks after Fox. The Qatar-based Al-Jazeera was not all bad. It was known for its willingness to air dissenting views, a rarity in the repressive Arab world, and it even broadcast interviews with Israelis. But Americans learned about its dark side in the aftermath of 9/11, when it aired messages from Osama bin Laden and reports harshly critical of the war on terror.

This July 22 Al-Jazeera staffers in Cairo quit the network, alleging that its coverage was biased in favor of the Muslim Brotherhood. The Brotherhood’s leader, Mohamed Morsi, had just been deposed as president by the Egyptian military. Unlike Saudi Arabia and other Persian Gulf states, Qatar’s regime sided with the Brotherhood in the Egyptian conflict. “The management in Doha provokes sedition among the Egyptian people and has an agenda against Egypt and other Arab countries,” former anchorman Karem Mahmoud told Gulf News, an English-language newspaper based in Dubai.

But Al-Jazeera America’s coverage of the continuing violence in Egypt, at least on its first broadcast day, did not suffer from that problem. To its American audience, the network played the conflict as a human-interest story. Both sides were well represented in a report from Cairo and a series of interviews and panels with Egyptians and Egyptian-Americans. The viewer got a vivid impression of senseless suffering all around, but no deeper understanding of either Egyptian politics or what the events meant for either the broader Middle East or America.

To be sure, the network did not distinguish itself by choosing as its first guest Stephen Walt, the Harvard international affairs professor who is co-author of the notorious 2007 book The Israel Lobby and U.S. Foreign Policy. But Walt took a “balanced” approach to the Egyptian dispute by denouncing everyone: “President Mubarak was ill-informed and stupid,” he said. “Then the Muslim Brotherhood was quite stupid.… And now I fear the Egyptian military is being stupid.”

The interviewer asked a question premised on the meaninglessness of it all: “People in my hometown of Baltimore are wondering: How important is Egypt, really, to America and America’s interests?” Not very important at all, answered Walt: “The main thing we have wanted from Egypt is the maintenance of the peace treaty between Egypt and Israel.…That’s important to us, but it’s not vital.” What happens in Egypt, he proclaimed, “is not likely to affect America’s strategic interests in any fundamental way.”

The viewer was left to wonder why such an inconsequential subject merited so much airtime.

Stelter’s Times story, which ran the day before the network’s debut, opened by describing its intent this way:

Fourteen hours of straight news every day. Hard-hitting documentaries. Correspondents in oft-overlooked corners of the country. And fewer commercials than any other news channel.

It sounds like something a journalism professor would imagine.

And therein lies the real problem with the new network. To be sure, in one respect Al-Jazeera America turned out not to be as bad as one might expect of a journalism professor’s dream. At least in my experience, left-wing bias and dishonesty are even worse on journalism faculties than in newsrooms (see Presswatch, TAS, September 2013).

Al-Jazeera America makes a serious effort at balance. A panel on President Obama’s higher-education policies, for instance, included a man from the libertarian Cato Institute, and a panel on solitary confinement in prisons included a retired guard as well as a former inmate and another convict’s mother. The story selection seems to reflect a liberal worldview—in addition to prisons and education, I saw segments on homelessness in Detroit, infrastructure in California, and cholera in Haiti—but one cannot deny these are all worthy topics.

With the exception of the prison panel, however, the segments were so dull that the only way I could bear to watch them was to make a game out of deciding which was worst. The winner was Haiti, which featured a report from a remote village where a cholera victim was being buried. The reporter apparently hiked a long way to get there, but he didn’t come back with much information. “We’re told that nobody here has any idea how the outbreak started,” he sonorously declared.

But it turned out he was burying the lead. In a studio interview after the recorded segment, the reporter explained that “there is now overwhelming evidence that the disease was…brought to Haiti by U.N. peacekeepers.” The reporter said that he got the runaround when he tried to get a statement from the U.N.: “We had to chase the secretary-general himself,” only to receive an evasive answer. Now that would have been footage worth seeing. (The anchor then announced that a half-hour special on cholera in Haiti would air the following night. To my great good fortune, I had plans.)

In short, while Al-Jazeera America may not be heavy-handedly ideological, it is heavy-handedly self-serious. It proclaims itself a high-minded alternative to the opinionated offerings of Fox, MSNBC, and to a lesser extent CNN. As Mediaite.com reported: “Within the first five minutes of air time, Al Jazeera America played very brief clips of Fox’s Bill O’Reilly and MSNBC’s Al Sharpton engaged in some of their most contentious onscreen moments followed by a voice saying, ‘news audiences know what is missing and they know what they want.’”

But straight news doesn’t have to be boring, and Al-Jazeera America’s programmers could learn a thing or two from the more established cable networks. The first three-quarters of Fox’s hour-long Special Report With Bret Baier is all straight news and consistently watchable. (The final quarter-hour is given over to a commentary panel that manages to be both high-toned and interesting.) CNN’s The Lead With Jake Tapper is another good example.

But it’s for good reason that the other networks tend to favor opinion shows during prime time. Tellingly, ratings-challenged CNN announced plans for a September revival of its long-running shout-fest Crossfire, which it sanctimoniously canceled in 2005 amid declining ratings.

Early indications suggest Al-Jazeera has not in fact found what viewers want. As Variety reported:

Al-Jazeera America is so dull that you’d have to pay me to watch—which The American Spectator will.