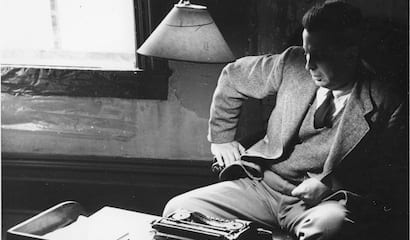 Suitable Accommodations: An Autobiographical Story of Family Life: The Letters of J.F. Powers, 1942-1963
Edited by Katherine A. Powers
(Farrar, Straus and Giroux, 480 pages, $35)

IN SUITABLE ACCOMODATIONS, Katherine A. Powers presents selections from the correspondence of her father, the American novelist and short story writer J.F. Powers. Powers is hardly a household name, and his black comedies about priests negotiating life in the postwar Midwest do not seem destined for wide readership. Yet Powers’s first novel, Morte d’Urban, beat out Nabokov’s Pale Fire, Updike’s Pigeon Feathers and Other Stories, and Katherine Anne Porter’s Ship of Fools for the National Book Award in 1963. Some of the most prominent writers of the 20th century, including Robert Lowell, Gore Vidal, Evelyn Waugh, Philip Roth, and Saul Bellow, can be counted among Powers’s admirers, and Flannery O’Connor once wrote him to confess that, “I admire your stories better than any others I know.” By the time his last work was published in 1988, Powers had produced only two novels and three collections of stories in a career of some four decades. Nevertheless, despite this modest body of work, he inspired a fiercely loyal following, both during his lifetime and after his death. Out of print at the time of his death, most of Powers’s catalog was soon reissued by New York Review of Books Classics, and has remained in print ever since.

Given the paucity of Powers’s literary output (or perhaps precisely because of it), Katherine Powers’s collection of her father’s letters is a significant literary occasion in its own right, reacquainting contemporary readers with Powers’s principal concerns as a writer and distilling an ordered narrative from an immense and chaotic body of thousands of letters. In her introduction to the letters, Katherine writes that her father always intended to write a novel about

a writer, an artist, with bright prospects, a taste for the good things in life, and an expectation of camaraderie as he made his way in the world. The man falls in love, gets married, has numerous children—but has neither money nor home. He finds no pleasant ease and little of the fellowship of like minds he associated with literary life he thought was to be his own. The novel would be called Flesh, a word infused with Jansenist distaste, conveying the black comedy and terrible bathos of high aesthetic and spiritual aspiration in hopeless contest with human needs and material necessity.

Although this novel remained unwritten, the tension between his idyllic vision of the artistic life and the pressures of the real thing remained a concern throughout Powers’s literary career. Katherine argues that her father, while unable to write his planned novel, was “in fact, not only living it but creating and embellishing it in his correspondence.” Indeed, Katherine posits that the sheer volume of her father’s correspondence goes “some way toward explaining the small number of his published books.” In bringing together these letters, Katherine has given us something like the novel her father never completed—with Powers taking the role of the artist thwarted by the realities of family life and facing the question of whether or not a great artist can also be a successful family man.

More than anything, Katherine’s selections show Powers was as wickedly funny in his correspondence as he was in his fiction. In a letter to Robert Lowell in which he talked about the problems of writing while raising five children, Powers complained that his “head feels like a vacant lot where children go to break bottles and swing dead cats.” In another letter, written during a visit to Indiana University, he warned his wife, Betty, that he would be visiting the Institute for Sex Research and might even meet Dr. Kinsey: “If he looks my way, I’ll expose myself.” Much of the humor here comes at Powers’s own expense. It’s a pity he didn’t live in the age of Twitter.

Although Powers was expert at finding and ridiculing the absurd in everyday life, these letters show us that he had a deeply humorless and romanticized view of the role of an artist. In an early letter to Betty (then his fiancée), Powers recounted how his mother “ruined his father’s life” by preventing him from realizing his talents as a pianist. Leaving his music behind, Powers senior ended up in various “paper shuffling” jobs. Powers’s early letters also lament the fate of artist Don Humphrey, whom Powers believed was the “greatest Catholic painter since El Greco.” Humphrey was forever pursuing his sacred calling as artist while trying to gather enough money to pay his bills. Jim saw in the story of his father the fate he very much wanted to avoid, and in the story of Humphrey the inevitable tragedy that every artist with a family must suffer.

Indeed, the letters show the practical difficulties continually caused by Powers’s view of art as his sacred calling. Seen through the lens of the child Katherine, Jim’s vision often appears self-important and even, at times, absurd. Because he considered “normal” work beneath him, virtually every family decision hinged on his ability to sell his stories. This collection’s title is a reference to Powers’s neverending search for a home suited to an artist with a large, growing family. The Powerses moved more than 20 times, bouncing from home to home in Minnesota (and even to Ireland) and often living with Betty’s family. Continually pressed for money, Powers nevertheless routinely turned down lucrative teaching opportunities. Jim’s already meager literary output might have been smaller had he taken on a day job, but regular income would have brought his family the financial stability it often desperately needed.

Betty was a published writer herself, and her attempts to reform Powers eventually gave way to sharing in his struggle to balance artistic pursuits and family life. While this collection does not include Betty’s responses to her husband’s letters, it does reproduce one of her journal entries, written shortly after the birth of the Powers’s fifth child:

Five, five, five. How did it all come about? I keep repeating Fr. Egan—they are, in the end, the only thing that will have mattered. I believe it; I feel it. And yet they do defy peace and order and what of art—of Jim’s if not mine? Are we to make him into just another man who will die, his body rot, his possessions be dispersed, and his immortality all in heaven? God does intend there to be man-made beauty on earth. We are to make order of it all. Order and art.

WATCHING POWERS’S LIFE unfold in this manner is painful for the reader, though not, one gathers, as painful as experiencing it must have been for his family. The dangers of idealism that Powers could plainly see in others—even his characters—he seemed incapable of seeing in himself. He believed the nature of the artistic vocation to be at odds with domesticity. This is not an entirely implausible thesis, as any writer with a large family and little money can attest. Powers’s greatness as a novelist, though, rests on his portrayal of the transformative effect of grace on unmoderated idealism, an effect whose possibility he does not seem to have allowed for in his own life.

In compiling these letters, Katherine Powers has done her best to reconcile J.F. Powers, the great if underrated American writer, with Jim Powers, the often lousy father and husband. It’s not uncommon for talented artists to be bad—even monstrous—human beings. This book presents Jim’s failings in such detail that Katherine seems to be exorcizing her experiences. Simultaneously, however, Katherine’s selections allow Powers’s humor and intelligence to shine through, leaving us with an intimate portrait of a brilliant—and in the end, lovable—man. Katherine writes that the letters’

wit and drollery and festive turns won me over. A distance developed between me, the person actually present in the predicament the letters describe, and me, the reader. And indeed, in selecting the letters to tell this story, I increasingly felt I was bringing order to a situation where there was little. With that came satisfaction and a certain amount of peace.

Though Powers himself missed the moments of grace embedded in domestic life, perhaps his daughter can find them for him. In a publishing world full of tell-all memoirs by bitter children, Katherine Powers has instead given us the equivalent of one final J.F. Powers novel to savor, to say nothing of a powerful impetus for returning to her father’s published work. This is no small accomplishment